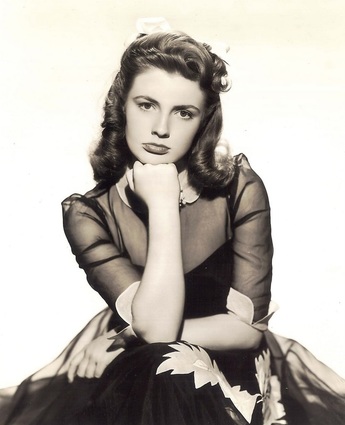 A stage actress from the age of 3, Joan Leslie toured vaudeville in a singing act with her two sisters. At ten, Leslie was an established advertising model. She came to Hollywood in 1936, making her screen debut in Camille under her given name of Brodel. In 1940 she was signed by Warner Bros., who changed her professional name to Leslie.

Though not yet 18, Leslie was cast in such meaty and demanding roles as the selfish clubfooted ingenue in High Sierra (1941) and Mrs. George M. Cohan in Yankee Doodle Dandy (1942). Loaned out to RKO in 1942, Leslie was given an opportunity to display her considerable terpsichorean skills in the Fred Astaire vehicle The Sky's the Limit. In Warners' Hollywood Canteen (1944) Leslie played herself, as did her real-life sister Betty Brodel. When her Warners contract ended in 1947, Leslie free-lanced for several years, turning in admirable performances in such second-echelon productions as Repeat Performance (1947) and The Woman They Almost Lynched (1956).

She more or less retired from film acting in the late 1950s, devoting herself to humanitarian work and to her new career as a dress designer, though she occasionally took on a TV role. Fans of Joan Leslie all felt just a little older when Leslie was teamed with fellow 1940s ingenue Teresa Wright as a pair of doddering Arsenic and Old Lace-type sisters on a late-1980s episode of TV's Murder She Wrote. Leslie died in 2015, at age 90.

Performed under her real name, debuting in Camille (1936), until adopting "Joan Leslie" for High Sierra (1941).

Her sister, Mary Brodel, had a short career in the 1940s, as did her other sister, Betty Brodel.

Mentioned in The Andrews Sisters' song "Corns for My Country": "We're not petite like Joan Leslie".

[on making Man in the Saddle (1951)] "Randolph Scott was a joy to work with, elegant, such a gentleman, and so devastatingly good looking. A charmer with beautiful eyes. I compare him to Gary Cooper, but Cooper had more versatility. Randy was so at ease on the set."

[on working with James Craig in Northwest Stampede (1948)] "He was a pill . . . not easy to work with. He seemed to have a chip on his shoulder and it showed in everything he did."

"Gary Cooper gave me a doll on the set [of Sergeant York (1941)]. That's how he saw me."
Explore the simpler time of yesteryear...
A time when men and women were truly glamorous. A time when you could watch any movie with your children and not have to worry about gratuitous sex or violence – yet enjoy all the lustful inferences and edge-of-your-seat suspense.
Welcome to The Timeless Theater!
We're in the process of identifying which of our films are in the Public Domain, and offering these for sale on DVD.
​Please stay Tuned...!
Check out our new Film Noir Collection:
Coffee Mugs!
Phone Cases!
iPad Cases!
More coming soon!