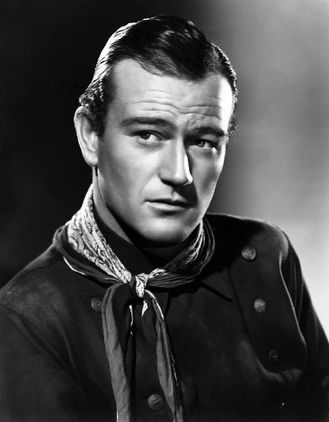 John Wayne was born Marion Robert Morrison in Iowa, to Mary Alberta (Brown) and Clyde Leonard Morrison, a pharmacist. He was of English, Ulster-Scots, and Irish ancestry.

Clyde developed a lung condition that required him to move his family from Iowa to the warmer climate of southern California, where they tried ranching in the Mojave Desert. Until the ranch failed, Marion and his younger brother Robert E. Morrison swam in an irrigation ditch and rode a horse to school. When the ranch failed, the family moved to Glendale, California, where Marion delivered medicines for his father, sold newspapers and had an Airedale dog named "Duke" (the source of his own nickname).

He did well at school both academically and in football. When he narrowly failed admission to Annapolis he went to USC on a football scholarship 1925-7. Tom Mix got him a summer job as a prop man in exchange for football tickets. On the set he became close friends with director John Ford for whom, among others, he began doing bit parts, some billed as John Wayne. His first featured film was Men Without Women (1930).

After more than 70 low-budget westerns and adventures, mostly routine, Wayne's career was stuck in a rut until Ford cast him in Stagecoach (1939), the movie that made him a star. He appeared in nearly 250 movies, many of epic proportions. From 1942-43 he was in a radio series, "The Three Sheets to the Wind", and in 1944 he helped found the Motion Picture Alliance for the Preservation of American Ideals, a Conservative political organization, later becoming its President. His conservative political stance was also reflected in The Alamo (1960), which he produced, directed and starred in.

His patriotic stand was enshrined in The Green Berets (1968) which he co-directed and starred in. Over the years Wayne was beset with health problems. In September 1964 he had a cancerous left lung removed; in March 1978 there was heart valve replacement surgery; and in January 1979 his stomach was removed. He received the Best Actor nomination for Sands of Iwo Jima (1949) and finally got the Oscar for his role as one-eyed Rooster Cogburn in True Grit (1969). A Congressional Gold Medal was struck in his honor in 1979. He is perhaps best remembered for his parts in Ford's cavalry trilogy - Fort Apache (1948), She Wore a Yellow Ribbon (1949) and Rio Grande (1950).

Trivia:
He and his drinking buddy, actor Ward Bond, frequently played practical jokes on each other. In one incident, Bond bet Wayne that they could stand on opposite sides of a newspaper and Wayne wouldn't be able to hit him. Bond set a sheet of newspaper down in a doorway, Wayne stood on one end, and Bond slammed the door in his face, shouting "Try and hit me now!" Wayne responded by sending his fist through the door, flooring Bond (and winning the bet).

He was offered the lead in The Dirty Dozen (1967), but went to star in and direct The Green Berets (1968) instead. The part was eventually given to Lee Marvin.

The evening before a shoot he was trying to get some sleep in a Las Vegas hotel. The suite directly below his was that of Frank Sinatra (never a good friend of Wayne), who was having a party. The noise kept Wayne awake, and each time he made a complaining phone call it quieted temporarily but each time eventually grew louder. Wayne at last appeared at Sinatra's door and told Frank to stop the noise. A Sinatra bodyguard of Wayne's size approached saying, "Nobody talks to Mr. Sinatra that way." Wayne looked at the man, turned as though to leave, then backhanded the bodyguard, who fell to the floor, where Wayne knocked him out by crashing a chair on top of him. The party noise stopped.

Although he complained that High Noon (1952) was "un-American", he was gracious enough to collect Gary Cooper's Oscar on his behalf. He was mainly afraid the movie would hurt 'Coop's career. He later teamed up with director Howard Hawks to tell the story his way in Rio Bravo (1959).

In 1979, as it became known that Wayne was dying of cancer, Barry Goldwater introduced legislation to award him the Congressional Gold Medal. Maureen O'Hara and Elizabeth Taylor flew to Washington to give testimony, and signed statements in support of the motion from Frank Sinatra, Gregory Peck, Jack Lemmon, Kirk Douglas, James Stewart and Katharine Hepburn were read out. The bill was passed unanimously, and the medal was presented to the Wayne family in the following year.

In 1973 Clint Eastwood wrote to Wayne, suggesting they star in a western together. Wayne wrote back an angry response criticizing the revisionist style and violence of Eastwood's latest western, High Plains Drifter (1973). Consequently Eastwood did not reply and no film was made.

"High Noon (1952) was the most un-American thing I have ever seen in my whole life. The last thing in the picture is ol' Coop [Gary Cooper] putting the United States marshal's badge under his foot and stepping on it. I'll never regret having run [screenwriter Carl Foreman] out of this country."

"My problem is that I'm not a handsome man like Cary Grant, who will be handsome at 65. I may be able to do a few more man-woman things before it's too late, but then what? I never want to play silly old men chasing young girls, as some of the stars are doing. I have to be a director - I've waited all these years to be one. The Alamo (1960) will tell what my future is."

[on The Green Berets (1968)] "When I saw what our boys are going through - hell - and how the morale was holding up, and the job they were doing, I just knew they had to make this picture."

[on Frank Capra] "I'd like to take that little Dago son of a bitch and tear him into a million pieces and throw him into the ocean and watch him float back to Sicily where he belongs."

[1979] "I've known Jane Fonda since she was a little girl. I've never agreed with a word she's said, but would give my life defending her right to say it."

"That Redford [Robert Redford] fellow is good. Brando [Marlon Brando]. Ah, Patton (1970) - George C. Scott. But the best of the bunch is Garner - James Garner. He can play anything. Comedy westerns, drama - you name it. Yeah, I have to say Garner is the best around today. He doesn't have to say anything."

[1973] "My build-up was done through constant exposure. By the time I went overseas to visit our boys during the Second World War, they had already seen my movies when they were back home. Now their kids are grown up and their kids are seeing my movies. I'm part of the family . . . I think Steve McQueen and Robert Redford have a chance of becoming lasting stars. And certainly that big kid - what the hell's his name? Jesus, I have such a hard time remembering my own name sometimes. Oh, you know the one I mean, that big kid, the one that's been directing some of his own movies lately. Yeah, that's the one - Clint Eastwood!"
Explore the simpler time of yesteryear...
A time when men and women were truly glamorous. A time when you could watch any movie with your children and not have to worry about gratuitous sex or violence – yet enjoy all the lustful inferences and edge-of-your-seat suspense.
Welcome to The Timeless Theater!
We're in the process of identifying which of our films are in the Public Domain, and offering these for sale on DVD.
​Please stay Tuned...!
Check out our new Film Noir Collection:
Coffee Mugs!
Phone Cases!
iPad Cases!
More coming soon!