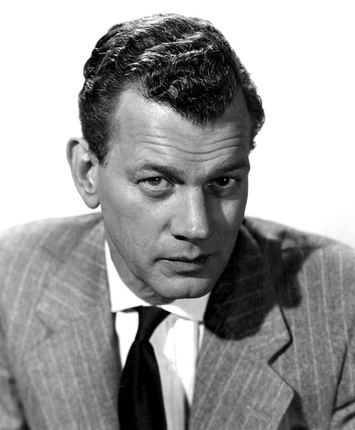 Born to a well-to-do Southern family, Joseph Cotten studied at the Hickman School of Expression in Washington D.C., and later sought out theater jobs in New York. He made his Broadway debut in 1930, and seven years later joined Orson Welles' progressive Mercury Theatre company, playing leads in such productions as Julius Caesar and Shoemaker's Holiday.

He briefly left Welles in 1939 to co-star in Katharine Hepburn's Broadway comeback vehicle The Philadelphia Story. Cotten rejoined Welles in Hollywood in 1940, making his feature-film debut as Jed Leland in Welles' Citizen Kane (1941). As a sort of private joke, Jed Leland was a dramatic critic, a profession which Cotten himself had briefly pursued on the Miami Herald in the late '20s. Cotten went on to play the kindly auto mogul Eugene Morgan in Welles' The Magnificent Ambersons in 1942, and both acted in and co-wrote Journey Into Fear, the film that Welles was working on when he was summarily fired by RKO.

Cotten remained a close friend of Welles until the director's death in 1985; he co-starred with Welles in Carol Reed's The Third Man (1949) and played an unbilled cameo for old times' sake in the Welles-directed Touch of Evil (1958). A firmly established romantic lead by the early '40s, Cotten occasionally stepped outside his established screen image to play murderers (Alfred Hitchcock's Shadow of a Doubt [1943]) and surly drunkards (Under Capricorn [1949]).

A longtime contractee of David O. Selznick, Cotten won a Venice Film Festival award for his performance in Selznick's Portrait of Jennie (1948). Cotten's screen career flagged during the 1950s and '60s, though he flourished on television as a guest performer on such anthologies as Alfred Hitchcock Presents, Fireside Theatre, The Great Adventure, and as host of The 20th Century-Fox Hour (1955), The Joseph Cotten Show (1956), On Trial (1959), and Hollywood and the Stars (1963). He also appeared in several stage productions, often in the company of his second wife, actress Patricia Medina. In 1987, Cotten published his engagingly candid autobiography, Vanity Will Get You Somewhere. He died of pneumonia in 1994 at the age of 88.

Before his celebrated appearance as Charles Foster Kane's best friend, Jed Leland, in Citizen Kane (1941), he appears as one of the reporters in the March of Time parody sequence early in the film. He is seated in the back of the projection room, in the last row at the far left, and is only clearly visible in one shot, but his voice along with that of Everett Sloane's (who plays Bernstein) can often be heard in the darkness on the soundtrack.

Worked with Alfred Hitchcock in one of his finest films, Shadow of a Doubt (1943). They worked again in Under Capricorn (1949) but the film flopped with Hitch disowned it. Cotton never was asked to appear in any subsequent Hitchcock film.

[on Bette Davis] "I loved working with her."

[on Hush...Hush, Sweet Charlotte (1964)] "Bette [Davis] is determined to make her mark on this picture, and Joan [Crawford] is determined to do the same and not be, how shall I put it, gobbled up by Bette, but for heaven's sake, don't quote me."

[on Hush...Hush, Sweet Charlotte (1964)] "I think we all wanted it to be a different picture than it was, especially Joan [Crawford]. She felt Bette [Davis] wasn't trying enough to life the script up to their level instead of simply playing down to it. She never came right out and said it to me but I could see it on her face. Joan wanted it to be a 'quality' picture. I think the movie works well enough for what it is, but it's no Gone with the Wind (1939) or anything resembling a true 'quality' picture."

[on Everett Sloane] "You know how he was so ugly there was a certain beauty about him. But he had his nose altered, wore contact lenses instead of his thick glasses, had his hair straightened, and no one wanted him. He became so morose that he walked out into the middle of the road and killed himself."
Explore the simpler time of yesteryear...
A time when men and women were truly glamorous. A time when you could watch any movie with your children and not have to worry about gratuitous sex or violence – yet enjoy all the lustful inferences and edge-of-your-seat suspense.
Welcome to The Timeless Theater!
We're in the process of identifying which of our films are in the Public Domain, and offering these for sale on DVD.
​Please stay Tuned...!
Check out our new Film Noir Collection:
Coffee Mugs!
Phone Cases!
iPad Cases!
More coming soon!