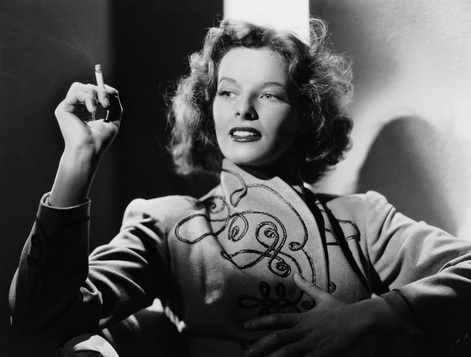 Hepburn was more a personality than an actress when she took the professional plunge after graduating from Bryn Mawr in 1928; her first stage parts were bits, but she always attracted attention with her distinct New England accent and her bony, sturdy frame. The actress' outspokenness lost her more jobs than she received, but, in 1932, she finally scored on Broadway with the starring role in The Warrior's Husband. She didn't want to sign the film contract offered her by RKO, so she made several "impossible" demands concerning salary and choice of scripts. The studios agreed to her terms, and, in 1932, she made her film debut opposite John Barrymore in A Bill of Divorcement (despite legends to the contrary, the stars got along quite well). Critical reaction to Hepburn's first film set the tone for the next decade: Some thought that she was the freshest and most original actress in Hollywood, while others were irritated by her mannerisms and "artificial" speech patterns. For her third film, Morning Glory (1933), Hepburn won the first of her four Oscars. But despite initial good response to her films, Hepburn lost a lot of popularity during her RKO stay because of her refusal to play the "Hollywood game." She dressed in unfashionable slacks and paraded about without makeup; refused to pose for pinup pictures, give autographs, or grant interviews; and avoided mingling with her co-workers. As stories of her arrogance and self-absorption leaked out, moviegoers responded by staying away from her films. The fact that Hepburn was a thoroughly dedicated professional -- letter-perfect in lines, completely prepared and researched in her roles, the first to arrive to the set each day and the last to leave each evening -- didn't matter in those days, when style superseded substance.

Briefly returning to Broadway in 1933's The Lake, Hepburn received devastating reviews from the same critics who found her personality so bracing in The Warrior's Husband. The grosses on her RKO films diminished with each release -- understandably so, since many of them (Break of Hearts [1935], Mary of Scotland [1936]) were not very good. She reclaimed the support of RKO executives after appearing in the moneymaking Alice Adams (1935) -- only to lose it again by insisting upon starring in Sylvia Scarlett (1936), a curious exercise in sexual ambiguity that lost a fortune. Efforts to "humanize" the haughty Hepburn personality in Stage Door (1937) and the delightful Bringing Up Baby (1938) came too late; in 1938, she was deemed "box-office poison" by an influential exhibitor's publication. Hepburn's career might have ended then and there, but she hadn't been raised to be a quitter. She went back to Broadway in 1938 with a part written especially for her in Philip Barry's The Philadelphia Story. Certain of a hit, she bought the film rights to the play; thus, when it ended up a success, she was able to negotiate her way back into Hollywood on her own terms, including her choice of director and co-stars. Produced by MGM in 1940, the film version was a box-office triumph, and Hepburn had beaten the "poison" label.

In her next MGM film, Woman of the Year (1942), Hepburn co-starred with Spencer Tracy, a copacetic teaming that endured both professionally and personally until Tracy's death in 1967. After several years of off-and-on films, Hepburn scored another success with 1951's The African Queen, marking her switch from youngish sophisticates to middle-aged character leads. After 1962's Long Day's Journey into Night, Hepburn withdrew from performing for nearly five years, devoting her attention to her ailing friend and lover Tracy. She made the last of her eight screen appearances with Tracy in Guess Who's Coming to Dinner (1967), which also featured her niece Katharine Houghton. Hepburn won her second Oscar for this film, and her third the following year for A Lion in Winter; the fourth was bestowed 13 years later for On Golden Pond (1981). When she came back to Broadway for the 1969 musical Coco, Hepburn proved that the years had not mellowed her; she readily agreed to preface her first speech with a then-shocking profanity, and, during one performance, she abruptly dropped character to chew out an audience member for taking flash pictures. Hepburn made the first of her several television movies in 1975, co-starring with Sir Laurence Olivier in Love Among the Ruins -- and winning an Emmy award, as well. Her last Broadway appearance was in 1976's A Matter of Gravity.

Throughout the 1970s and 1980s, Hepburn continued to star on TV and in films, announcing on each occasion that it would be her last performance. She also began writing books and magazine articles, each of them an extension of her personality: self-centered, well-organized, succinct, and brutally frank (especially regarding herself). While she remained a staunch advocate of physical fitness, Hepburn suffered from a genetic condition, a persistent tremor that caused her head to shake -- an affliction she blithely incorporated into her screen characters. In 1994, Warren Beatty coaxed Hepburn out of her latest retirement to appear as his aristocratic grand-aunt in Love Affair. Though appearing frailer than usual, Katharine Hepburn was in complete control of herself and her craft, totally dominating her brief scenes. And into her nineties and on the threshold of her tenth decade, Katharine Hepburn remained the consummate personality, actress, and star.

On June 29, 2003 Katharine Hepburn died of natural causes in Old Saybrook, Connetticut. She was 96.

She never watched Guess Who's Coming to Dinner (1967) because it was Spencer Tracy's last film.

A leading contender for Scarlett O'Hara in Gone with the Wind (1939), she later served as Maid of Honor at Vivien Leigh's and Laurence Olivier's wedding.

Had a relationship with Spencer Tracy from 1943 until his death in 1967.

Did not suffer from Parkinson's disease. She set the record straight in the 1993 TV documentary Katharine Hepburn: All About Me (1993), which she narrated herself. Quote: "Now to squash a rumor. No, I don't have Parkinson's. I inherited my shaking head from my grandfather Hepburn. I discovered that whiskey helps stop the shaking. Problem is, if you're not careful, it stops the rest of you too. My head just shakes, but I promise you, it ain't gonna fall off!".

Did all her own stunts because the stunt woman never stood up straight enough.

Turned down the role of Kitty Foyle in Kitty Foyle (1940). The part was then given to Ginger Rogers, who went on to win the Best Actress Oscar for her performance.

[on director George Cukor] "He has the ability to make me trust myself."

[on Humphrey Bogart] "Bogart was like Henry Fonda -- proud and happy to be an actor."

[on Humphrey Bogart] "He was a real man -- nothing feminine about him. He knew he was a natural aristocrat -- better than anybody."

[on Peter O'Toole] "He can do anything. A bit cuckoo, but sweet and terribly funny."

"Acting is the most minor of gifts and not a very high-class way to earn a living. After all, Shirley Temple could do it at the age of four."