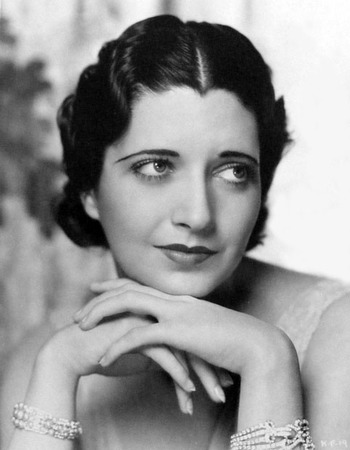 Kay Francis is possibly the biggest of the 'forgotten stars' from Hollywood's Golden Era, yet, for a while in the 1930s, she ranked as one of the most popular actresses, tagged the 'Queen of Warner Brothers', by 1935 earning a yearly salary of $115,000 (compared to Bette Davis with $18,000). The daughter of actress Katherine Clinton and businessman Joseph Gibbs, Kay did not start her working life in show business but sold real estate and arranged extravagant parties for wealthy socialites.

Following her marriage in 1922 to James Dwight Francis, son of a moneyed family, Kay adopted the surname Francis. Her first acting job was in a modernised version of 'Hamlet' (as the Player Queen) in 1925, performing as Katharine Francis. She appeared as Marjorie Grey in the melodrama "Crime" (1927) and in the Ring Lardner play "Elmer the Great" (1928), produced by George M. Cohan and starring Walter Huston as Elmer Kane. On the strength of her stage work, Kay was screen-tested by Paramount and subsequently offered a contract (1929-31). A brief affair with writer / director Edmund Goulding (some time around April 1928) may also have been a contributing factor.

She had a bit in the first Marx Brothers outing, The Cocoanuts (1929), and then graduated to playing sophisticated seductresses opposite stars like William Powell and Ronald Colman. She appeared in the Lubitsch comedy Trouble in Paradise (1932), though unhappy about being billed below Miriam Hopkins in the picture. One of her best early films was the comedy/drama One Way Passage (1932), playing a gravely-ill baroness opposite Powell's gentleman burglar, a doomed romance interlaced with witty dialogue described by a reviewer as 'spilled cocktail and love at first sight'.

Paramount, at the time well-stocked with female stars but experiencing financial problems, decided to let Kay move to Warner Brothers, where she would remain for the rest of the decade. A tall, attractive, grey-eyed brunette with undeniable style and poise, she soon acquired a reputation as Hollywood's 'best dressed woman', wearing the most glamorous gowns designed by great studio costumers like Orry-Kelly, Travis Banton and Adrian. Particularly female audiences often flocked to see Kay Francis pictures simply to appreciate her sumptuous wardrobe. For her part, Kay spent a lot of time and effort on collaborative efforts with costume designers to select the right clothes for the parts she played. Dorothy Jeakins believed, that Kay possessed an 'innate sense of style'.

By the mid-1930s, Kay earned $5,250 per week and was voted by Variety as Hollywood's sixth most popular star. Numerous magazine articles were written about every detail of her life and in and off the studio lot. She had major hits with I Found Stella Parish (1935) and Confession (1937), which were excellent money-spinners for the studio. While much was made at the time and since of her famous lisp, this had not hitherto been a significant detriment to Kay's career. At least, not until her falling out with the studio executives who thought her salary too excessive.

The tight control the studio exercised over the roles she played on screen caused her to file a lawsuit against Warner Brothers, trying to escape her contract. It had all started to go wrong for her, when she was assigned the role of 'women's picture star', effectively typecasting her in sentimental melodramas, earnest biopics (The White Angel (1936), and three handkerchief tearjerkers like My Bill (1938), her script filled with Rs and Ls as chastisement for bucking the system. Though she still managed to give several good performances, the writing was on the wall. By the end of the decade, the 'Queen of Warner Brothers' mantle had passed on to Bette Davis.

During the mid-1940s, Kay co-produced several B-movies as vehicles for herself at Monogram, then made a brief return to stage work, acting in summer stock before retiring permanently in 1952. She spent the remainder of her life in virtual seclusion in New York and in her estate near Falmouth, Cape Cod. She left some of her estate (in excess of one million dollars) to an organization training guide dogs for the blind, Seeing Eye Inc. Her surviving personal papers are accessible at the Wesleyan University Cinema Archives.

Trivia:
Because of a speech impediment, she was known around the Paramount lot as "the wavishing Kay Fwancis."

Was one of the many stars labeled "box office poison" in an article published in The Hollywood Reporter in 1938.

According to writer/director Vincent Sherman, Jack Warner publicly humiliated Francis after her Florence Nightengale biopic failed at the office by announcing she would appear in B pictures. Francis reportedly said she'd scrub floors if necessary for her $4000 a week salary.

"A dog has kindliness in his heart and dignity in his demeanor. The finest qualities anyone can have."