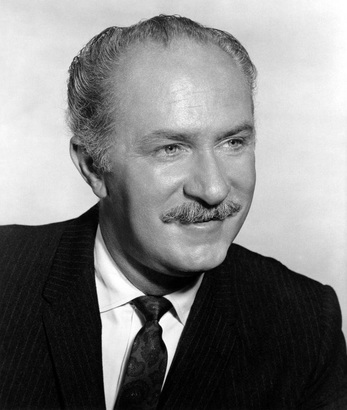 
Actor Keenan Wynn was the son of legendary comedian Ed Wynn and actress Hilda Keenan, and grandson of stage luminary Frank Keenan. After attending St. John's Military Academy, Wynn obtained his few professional theatrical jobs with the Maine Stock Company. After overcoming the "Ed Wynn's Son" onus (his father arranged his first job, with the understanding that Keenan would be on his own after that), Wynn developed into a fine comic and dramatic actor on his own in several Broadway plays and on radio.

He was signed to an MGM contract in 1942, scoring a personal and professional success as the sarcastic sergeant in 1944's See Here Private Hargrove (1944). Wynn's newfound popularity as a supporting actor aroused a bit of jealousy from his father, who underwent professional doldrums in the 1940s; father and son grew closer in the 1950s when Ed, launching a second career as a dramatic actor, often turned to his son for moral support and professional advice.

Wynn's film career flourished into the 1960s and 1970s, during which time he frequently appeared in such Disney films as The Absent-Minded Professor (1960) and The Love Bug (1968) as apoplectic villain Alonso Hawk. Wynn also starred in such TV series as Troubleshooters and Dallas. Encroaching deafness and a drinking problem plagued Wynn in his final years, but he always delivered the goods onscreen. Wynn was the father of writer/director Tracy Keenan Wynn and writer/actor Edmund Keenan (Ned) Wynn.

Trivia:
Was originally to play Perry White in Superman (1978), but had to drop out upon arriving in London for filming due to heart problems.

He was uncle to The Hudson Brothers due to his marriage to Sharley (they are her nephews). Daughter Hilda was married to actor/singer Paul Williams from 1993-2004. Daughter Emily died in her early 20s from cancer.

Keenan's wife Evie Wynn Johnson was a young actress who toured with Katharine Cornell but gave up her career when she married Wynn.

Part of the reason for his eventual loss of hearing was due to the fact that he raced just about anything on land or water and most of the vehicles were loud and unmuffled. He was a regular feature in and around the Detroit, Michigan, area racing boats, cars and motorcycles, sometimes racing boats on the Detroit River (the border between the US and Ontario, Canada).

Introduced Steve McQueen and Lee Marvin to the power of Triumph motorcycles on a hill climb.

"My billing has always been "and", or "with", or "including". That's all right; let the stars take the blame."

"I do not consider myself a star. I'm a craftsman and I know my craft."
Explore the simpler time of yesteryear...
A time when men and women were truly glamorous. A time when you could watch any movie with your children and not have to worry about gratuitous sex or violence – yet enjoy all the lustful inferences and edge-of-your-seat suspense.
Welcome to The Timeless Theater!
We're in the process of identifying which of our films are in the Public Domain, and offering these for sale on DVD.
​Please stay Tuned...!
Check out our new Film Noir Collection:
Coffee Mugs!
Phone Cases!
iPad Cases!
More coming soon!