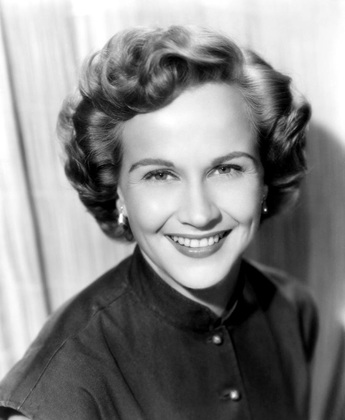 Born Janet Cole, American actress Kim Hunter trained at the Actors Studio. At age 17, she debuted onscreen in The Seventh Victim (1943) before appearing in several subpar films. Her popularity was renewed with her appearance in the British fantasy A Matter of Life and Death (1946), and, in 1947, she created the role of Stella Kowalski on Broadway in Tennessee Williams' A Streetcar Named Desire, reprising the role in the 1951 film version, for which she won the Best Supporting Actress Oscar.

But her career was dealt a terrible blow when her name appeared without cause in Red Channels, a Red-scare pamphlet during the McCarthy Era, and she was blacklisted. Several years later, she was called as the star witness in a court case instigated by another Red Channels victim, and her testimony discredited the publication and made it possible for dozens of other performers to reclaim their careers.

She returned to films sporadically after this, and also did much work on stage and television; among her roles was appearing as a female ape in three Planet of the Apes films. She also wrote Loose in the Kitchen, a combination autobiography-cookbook. Hunter was married to writer Robert Emmett from 1951 until her death in 2002.

Trivia:
An agent for David O. Selznick saw her in a stage production of "Arsenic and Old Lace" at the Pasadena Playhouse and signed her to a seven-year contract. Selznick suggested she change her first name to "Kim" and a RKO secretary suggested the last name of "Hunter". A few years later, Irene Mayer Selznick, David's ex-wife by then, recommended Kim for the role of "Stella" in A Streetcar Named Desire (1951).

According to an in-depth article on Kim by Joseph Collura in the October 2009 issue of "Classic Images", Kim was quiet and painfully shy as a child and overcame it through the guidance of a local dramatics teacher, a Mrs. Carmine. Included were diction, voice and posture lessons.

[about her "blacklisting"] "For a long while, I wouldn't talk about it at all. I do now, because there's a whole new generation that doesn't remember. And the more one knows, the more one can see, and not allow history to repeat itself."

[on being known as an actress rather than a star] "That's fairly accurate, I think, for a great number of us. Becoming a star wouldn't have bothered me, but what is a star? A star isn't anything. An actor acts. That's the important thing."

[about her Oscar-winning role in A Streetcar Named Desire (1951)] "It was not at all certain I would do the movie. As a matter of fact, I had to test for it twice. First, I did a film test in New York with Elia Kazan. Then I got a call telling me to come to California for another test. They weren't happy with my hair. Vivien Leigh was going to wear a blonde wig, and for some reason they wanted me to be blonde as well--as if sisters always have the same hair color. So I bleached my hair and got the part. Later Kazan said to me, "There was no way I was going to direct the film with anybody else but you playing Stella"."

[on Vivien Leigh] "Vivien was an incredibly charming woman! When she spoke to you - to anybody - you were the only person in the world."

[on Bette Davis] "I love Bette. What a dame! Absolutely straight on - no nonsense!"
Explore the simpler time of yesteryear...
A time when men and women were truly glamorous. A time when you could watch any movie with your children and not have to worry about gratuitous sex or violence – yet enjoy all the lustful inferences and edge-of-your-seat suspense.
Welcome to The Timeless Theater!
We're in the process of identifying which of our films are in the Public Domain, and offering these for sale on DVD.
​Please stay Tuned...!
Check out our new Film Noir Collection:
Coffee Mugs!
Phone Cases!
iPad Cases!
More coming soon!