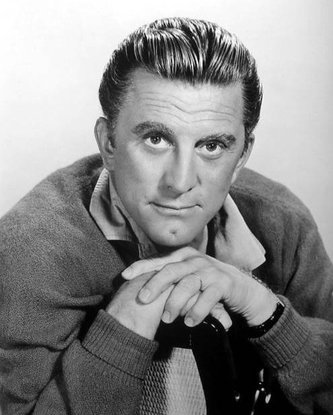 Once quoted as saying "I've made a career of playing sons of bitches," Kirk Douglas is considered by many to be the epitome of the Hollywood hard man. In addition to acting in countless films over the course of his long career, Douglas has served as a director and producer, and will forever be associated with his role in helping to put an end to the infamous Hollywood black list.

Douglas (born Issur Danielovitch) was the son Russian Jewish immigrant parents in Amsterdam, NY, on December 9, 1916. He waited tables to finance his education at St. Lawrence University, where he was a top-notch wrestler. While there, he also did a little work in the theater, something that soon gave way to his desire to pursue acting as a career. After some work as a professional wrestler, Douglas held various odd jobs, including a stint as a bellhop, to put himself through the American Academy of Dramatic Arts. In 1941, he debuted on Broadway, but had only two small roles before he enlisting in the Navy and serving in World War II. Following his discharge, Douglas returned to Broadway in 1945, where he began getting more substantial roles; he also did some work on radio.

After being spotted and invited to Hollywood by producer Hal Wallis, Douglas debuted onscreen in The Strange Love of Martha Ivers (1946), but he did not emerge as a full-fledged star until he portrayed an unscrupulously ambitious boxer in Champion (1949); with this role (for which he earned his first Oscar nomination), he defined one of his principle character types: a cocky, selfish, intense, and powerful man. Douglas fully established his screen persona during the '50s thanks to strong roles in such classics as Billy Wilder's Ace in the Hole (1951), William Wyler's Detective Story (1951), and John Sturges' Gunfight at the O.K. Corral (1957). He earned Oscar nominations for his work in The Bad and the Beautiful (1952) and Lust for Life (1956), both of which were directed by Vincente Minnelli.

In 1955, the actor formed his own company, Bryna Productions, through which he produced both his own films and those of others, including Stanley Kubrick's Paths of Glory (1957) and Spartacus (1960); both of these movies would prove to be two of the most popular and acclaimed of Douglas' career. In 1963, he appeared on Broadway in Ken Kesey's One Flew over the Cuckoo's Nest, but was never able to interest Hollywood in a film version of the work; he passed it along to his son Michael Douglas (a popular actor/filmmaker in his own right), who eventually brought it to the screen to great success.

During the '60s, Douglas continued to star in such films as John Huston's The List of Adrian Messenger (1963) and John Frankenheimer's Seven Days in May (1964), both of which he also produced. He began directing some of his films in the early '70s, scoring his greatest success as the director, star, and producer for Posse (1975), a Western in which he played a U.S. marshal eager for political gain.

Though he continued to appear in films, by the '80s Douglas began volunteering much of his time to civic duties. Since 1963, he had worked as a Goodwill Ambassador for the State Department and the USIA, and, in 1981, his many contributions earned him the highest civilian award given in the U.S., the Presidential Medal of Freedom. For his public service, Douglas was also given the Jefferson Award in 1983. Two years later, the French government dubbed him Chevalier of the Legion of Honor for his artistic contributions.

Other awards included the American Cinema Award (1987), the German Golden Kamera Award (1988), and the National Board of Review's Career Achievement Award (1989). In 1995, the same year he suffered a debilitating stroke, Douglas was presented with an honorary Oscar by the Academy; four years later, he was the recipient of the American Film Institute's Lifetime Achievement Award, an honor that was accompanied by a screening of 16 of his films. In addition to his film work, Douglas has also written two novels: Dance with the Devil (1990) and The Secret (1992). He published his autobiography, The Ragman's Son, in 1988.

In March of 2009, Douglas starred Before I Forget, a one man show that took place at the Center Theater Group's Kirk Douglas Theatre in Culver City, California. All four performances of the show were filmed and later made into a documentary that eventually screened in 2010. The following year, Douglas presented the Oscar for Best Supporting Actress at the 83rd Academy Awards.

Was originally cast to play Col. Sam Trautman in First Blood (1982), but walked out on the project. Douglas wanted substantial changes made to the script, specifically that John Rambo die at the hands of Trautman, like the character did in the novel. The writers held their ground and refused. Richard Crenna was eventually cast in the role.

He wore lifts in many of his films, which made him appear about 5' 11" or 6 feet on screen. Once, as a prank, Burt Lancaster found Douglas's lifts on a film set and hid them from him, which allegedly infuriated the shorter actor.

After his son Michael Douglas was fired from the stage production of the play "Summer Tree", Kirk bought the stage and film rights to the story and gave it to Michael to star in.

He and his wife Anne Douglas renewed their wedding vows in California around the 50th anniversary of their 1954 marriage. They reaffirmed their vows before 300 friends and family members at the famous Greystone Estate in Beverly Hills. Guests included Dan Aykroyd, Lauren Bacall, Nancy Reagan and Tony Curtis. Douglas walked into the traditional Jewish ceremony to the tune of "I'm In The Mood For Love" and later sang a tune he'd written for the occasion, "Please Stay In Love With Me".

Admitted he made The Big Trees (1952) for nothing just to get out of his contract with Warner Bros. He later said, "It was a terrible movie".

He was not close friends with Burt Lancaster as was often perceived. The closeness of their friendship was largely fabricated by the publicity-wise Douglas, while, in reality, they were very competitive with each other and sometimes privately expressed a mutual personal disdain despite a mutual respect for their acting talents.

Hedda Hopper told him after he became a star with Champion (1949), "Now that you're a big hit, you've become a real S.O.B." Douglas replied," You're wrong. I was always an S.O.B. You just never noticed before.".

Hal B. Wallis tested him for a role in what would be his film debut in The Strange Love of Martha Ivers (1946) after a recommendation by friend Lauren Bacall.

"I've finally gotten away from Burt Lancaster. My luck has changed for the better. I've got nice-looking girls in my films now."

"I did four movies with [John Wayne]. We were a strange combination. He was a Republican and I was a Democrat. We argued all the time."

[on Michael Moore's interview with Charlton Heston in Bowling for Columbine (2002)] "I cannot forgive the way he treated Charlton Heston. Even if I don't agree with much of Heston's politics, Chuck is a gentleman. He agreed to have an interview with Moore, and Moore took advantage of the situation and made Chuck look foolish. He had been invited to Heston's home and he was treated with courtesy. I winced when I saw the expression on Chuck's face change as he realized that he had been duped. And yet he remained a gentleman and dismissed the interloper with grace."

[on Doris Day] "That face she shows the world -- smiling, only talking good, happy, tuned into God -- as far as I'm concerned, that's just a mask. I haven't a clue as to what's underneath. Doris is just about the remotest person I know."

[on the death of Tony Curtis]: Tony Curtis was one of the best-looking guys in Hollywood. He was often described as beautiful, but he was also a fine actor. I worked with Tony in The Vikings (1958) and in Spartacus (1960), and we were friends for a long time. What I will miss most about him is his sense of humor. It was always fun to be with him.

[on Paths of Glory (1957)] "A truly great film with a truly great theme: the insanity and brutality of war. As I predicted, it made no money."

[2011, on Anne Hathaway] "She's gorgeous! Wow! Where were you when I was making pictures?"
Explore the simpler time of yesteryear...
A time when men and women were truly glamorous. A time when you could watch any movie with your children and not have to worry about gratuitous sex or violence – yet enjoy all the lustful inferences and edge-of-your-seat suspense.
Welcome to The Timeless Theater!
We're in the process of identifying which of our films are in the Public Domain, and offering these for sale on DVD.
​Please stay Tuned...!
Check out our new Film Noir Collection:
Coffee Mugs!
Phone Cases!
iPad Cases!
More coming soon!