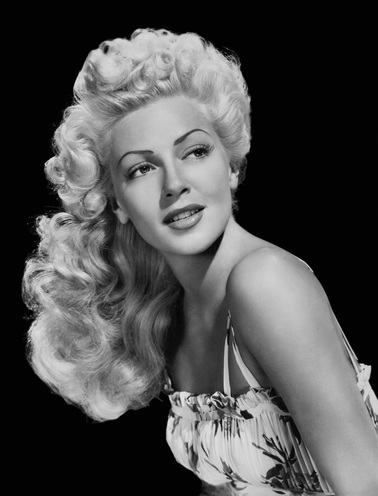 Lana Turner (born Julia Jean Turner, February 8, 1921 – June 29, 1995) was an American film and television actress. She was discovered in 1937 by William R. Wilkerson, founder of The Hollywood Reporter, as she sipped a Coke at the counter of the Top Hat Cafe, on a corner of Sunset Boulevard in Los Angeles. At the age of 16 she was signed to a personal contract by Warner Bros director Mervyn LeRoy, who took her with him when he moved to Metro-Goldwyn-Mayer in 1938. Turner attracted attention in her first film, LeRoy's They Won't Forget (1937), and she later starred in featured roles, often as an ingenue. In 1939, her auburn hair was bleached blonde for a film at MGM, and she remained blonde for the rest of her life, except for a few film roles.

Turner, an actress bolstered by her extreme beauty, reached the height of her fame in the 1940s and 1950s. During World War II, Turner became a popular pin-up girl because of her popularity in such films such as Ziegfeld Girl (1941), Johnny Eager (1942), Slightly Dangerous (1943), and four films with Metro-Goldwyn-Mayer's "king of the lot", Clark Gable. The Turner-Gable films' successes were only heightened by gossip-column rumors about a relationship between the two. Turner even had a B-17 Flying Fortress—the Tempest Turner—named after her.[18] Following the canned The Sea-Wolf project, Turner and Gable were set to star in The Uniform in December 1940.[19] Turner was eventually replaced by Rosalind Russell, and the film was released as They Met in Bombay (1941).

During the early 1940s, she established herself as a leading actress in such films as Johnny Eager (1941), Honky Tonk (1941), Ziegfeld Girl (1941), and Somewhere I'll Find You (1942). She appeared in the 1941 horror film Dr. Jekyll and Mr. Hyde, and her reputation as a glamorous femme fatale was enhanced by her performance in the film noir The Postman Always Rings Twice (1946). Her popularity continued through the 1950s, in such films as The Bad and the Beautiful (1952) and Peyton Place (1957), for which she was nominated for an Academy Award for Best Actress.

Media controversy surrounded Turner in 1958 when her daughter, Cheryl Crane, stabbed Turner's lover Johnny Stompanato to death in their Beverly Hills home; a coroner's inquest concluded that Crane had acted in self-defense. Turner's next film, Imitation of Life (1959), proved to be one of the greatest financial successes of her career, but onward from the early 1960s, her roles were fewer.

Turner spent most of the 1970s and early 1980s in semiretirement, only working occasionally. In 1982, she accepted a much publicized and lucrative recurring guest role in the television series Falcon Crest, affording the series the highest rating it ever achieved. Turner made her final film appearance in 1985, and died from throat cancer in 1995, aged 74.

Available Films:
Trivia:
According to the book "Golden Girls of MGM" by Jane Ellen Wayne, she lost her eyebrows due to the glue used to attach false ones to give her an Asian look.

She was set to appear in Anatomy of a Murder (1959) with James Stewart until she objected to the off-the-rack wardrobe that director Otto Preminger had selected for her. Lee Remick took over the role.

In Dr. Jekyll and Mr. Hyde (1941) with Spencer Tracy and Ingrid Bergman Turner was originally supposed to play Ivy, the tart. Bergman was supposed to play the innocent girl engaged to Tracy, but she wanted Turner's part and so the roles were switched.

Once said that her turn as Cora Smith in The Postman Always Rings Twice (1946) was "the role I liked best".

Was offered the role of Mrs. Cabot on the series Hotel (1983), but made so many demands that she was dropped and replaced by Anne Baxter.

Became pregnant by her first husband Artie Shaw in 1940 and her then-lover Tyrone Power in 1946; on both occasions she had abortions.

She became involved with co-star Fernando Lamas while filming The Merry Widow (1952). He was supposed to co-star with her again in Latin Lovers (1953), but they had a falling out and Lamas was replaced in the film by Ricardo Montalban.

In 1958, while filming Another Time, Another Place (1958) in London, England, she was visited by her boyfriend, gangster Johnny Stompanato. Stompanato suspected that she was having an affair with co-star Sean Connery and at one point confronted Connery and threatened to kill him. Connery knocked him unconscious with one punch. He then waited until Stompanato regained consciousness and told him that if he ever saw Stompanato again he would kill him. Stompanato left London the next day.

"I find men terribly exciting, and any girl who says she doesn't is an anemic old maid, a streetwalker, or a saint."

"I planned on having one husband and seven children, but it turned out the other way around."
Explore the simpler time of yesteryear...
A time when men and women were truly glamorous. A time when you could watch any movie with your children and not have to worry about gratuitous sex or violence – yet enjoy all the lustful inferences and edge-of-your-seat suspense.
Welcome to The Timeless Theater!
We're in the process of identifying which of our films are in the Public Domain, and offering these for sale on DVD.
​Please stay Tuned...!
Check out our new Film Noir Collection:
Coffee Mugs!
Phone Cases!
iPad Cases!
More coming soon!