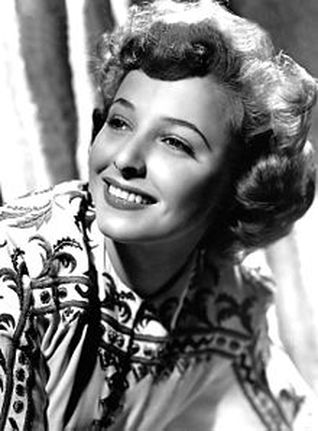 American actress Laraine Day, born Laraine Johnson, a descendant of a prominent Mormon pioneer leader, moved with her family from Utah to California, where she began her acting career with the Long Beach Players. In 1937 she debuted onscreen in a bit part in Stella Dallas; shortly afterwards she won lead roles in several George O'Brien westerns at RKO, in which she was billed as "Laraine Hays" and then "Laraine Johnson."

In 1939 she signed with MGM, going on to become popular and well-known (billed as "Laraine Day") as Nurse Mary Lamont, the title character's fiancee in a string of seven "Dr. Kildare" movies beginning with Calling Dr. Kildare (1939); Lew Ayres played Dr. Kildare. During the '40s and '50s she played a variety of leads in medium-budget films made by several studios. She rarely appeared in films after 1960, but later occasionally appeared on TV, portraying matronly types. She was married to famous baseball player Leo Durocher from 1947-60, when she was sometimes referred to as "the first lady of baseball."

Her first husband was singer Ray Hendricks, and her third, TV producer Michael Grilkhas. She is the author of a book of memoirs, Day With Giants (1952), and an inspirational book, The America We Love; in the '70s she was the official spokeswoman for the Make America Better program of the National Association of Real Estate Boards, traveling across the country speaking on environmental issues. Day died at age 87 in November 2007.

She was so commited to her Mormon faith that during her lifetime she never swore, smoked, or drank any kind of alcohol, coffee or tea.

She was described by many as being very kind, intellectual, ladylike, and influential.

She was the first choice to play Mary in It's a Wonderful Life (1946) but had to decline the role as she was already busy working on The Locket (1946). Donna Reed later got the role and coincidentally the two films were both released to theatres on December 20, 1946.

At MGM she was told that if she did Keep Your Powder Dry (1945) that she would be rewarded with the female lead in Undercurrent (1946) with Robert Taylor. When the role was given to Katharine Hepburn Laraine left MGM and never returned.

She was the original choice to play Leona Stevenson in Sorry, Wrong Number (1948) but had to withdraw due to her work schedule in My Dear Secretary (1948). The role later went to Barbara Stanwyck.

In 1951, RKO Radio Pictures tried to compose a film noir entitled "The Sins of Sarah Ferry". The story was about a courthouse clerk in Binghamton, New York who finds herself falling in love with a beautiful liar whose accused of armed robbery as well as a hit run charge involving a death. The cast would have starred Laraine Day, Fred MacMurray, Yvonne De Carlo, Hugh Beaumont, Glenn Ford, Howard Duff, and Evelyn Keyes, with the studio wanting to shoot on location in Binghamton and neighboring Johnson City. This project never materialized because the plot was considered to close of a generic step-up of Double Indemnity (1944) and the studio never received a reply via phone call or standard mail from the Binghamton Courthouse or then Mayor Donald Kramer granting them permission to film on location in the area and negotiate a fair range of payment. Based on that neglect, the studio immediately canceled this project and moved on.

"I recall playing practical jokes with John Wayne. I once got a whole bunch of keys and had little tags made that said, "If lost, please return to John Wayne, RKO Studios. Reward." And I just dropped them all over town. [He got a lot of] phone calls, people showing up at the studio. He never learned who did it."

"Gary (Cooper) turned out to be the surprise of my young life. He was so convincing with his stuttering, stammering awkward little boy manners. When the action called for Dr Wassell to kiss me, I got all set for a bashful boy kiss. Well, it was like holding a hand grenade and not being able to get rid of it! I was left breathless."

"Hitchcock was a character. In one particularly scary scene I had to sneak down a dark corridor. When I got to the end there was Mr Hitchcock, sticking out his tongue and flapping his hands in the back of his ears. I didn't dare laugh, because the cameras were turning. But he certainly eliminated any tension I felt."

[on John F. Kennedy] "His liberal agenda and womanizing lifestyle are no good for America."
Explore the simpler time of yesteryear...
A time when men and women were truly glamorous. A time when you could watch any movie with your children and not have to worry about gratuitous sex or violence – yet enjoy all the lustful inferences and edge-of-your-seat suspense.
Welcome to The Timeless Theater!
We're in the process of identifying which of our films are in the Public Domain, and offering these for sale on DVD.
​Please stay Tuned...!
Check out our new Film Noir Collection:
Coffee Mugs!
Phone Cases!
iPad Cases!
More coming soon!