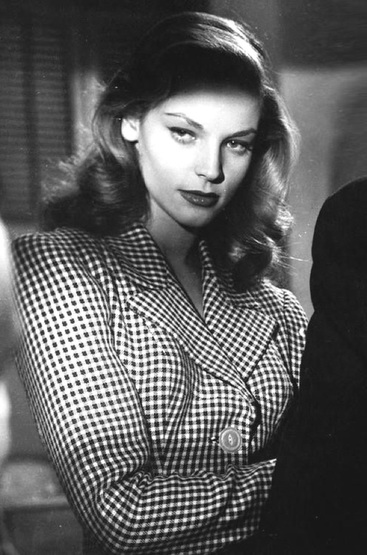 For her screen debut, Hawks cast Bacall opposite Humphrey Bogart in To Have and Have Not (1944). The young actress was so nervous that she walked around with her chin pressed against her collarbone to keep from shaking. As a result, she had to glance upward every time she spoke, an affectation which came across as sexy and alluring, earning Bacall the nickname "The Look." She also spoke in a deep, throaty manner, effectively obscuring the fact that she was only 19-years-old. Thanks to the diligence of Hawks and his crew -- and the actress' unique delivery of such lines as "If you want anything, just whistle..." -- Bacall found herself lauded as the most sensational newcomer of 1944. She also found herself in love with Humphrey Bogart, whom she subsequently married.

Bogie and Bacall co-starred in three more films, which increased the actress' popularity, but also led critics to suggest that she was incapable of carrying a picture on her own. Bacall's disappointing solo turn in Confidential Agent (1945) seemed to confirm this, but the actress was a quick study and good listener, and before long she was turning in first-rate performances in such films as Young Man With a Horn (1950) and How to Marry a Millionaire (1953).

Bogart's death in 1957 after a long and painful bout with cancer left Bacall personally devastated, though, in the tradition of her show-must-go-on husband, she continued to perform to the best of her ability in films such as Designing Woman (1957) and The Gift of Love (1958). In the late '60s, after Bacall's second marriage to another hard-case actor, Jason Robards Jr., she received only a handful of negligible film roles and all but dropped out of moviemaking. In 1970, Bacall made a triumphant comeback in the stage production Applause, a musical adaptation of All About Eve, in which she played grand dame Margo Channing, a role originally played by Bette Davis in the film version.

Her sultry-vixen persona long in the past, Bacall spent the '70s playing variations on her worldly, resourceful Applause role, sometimes merely being decorative (Murder on the Orient Express, 1974), but most often delivering class-A performances (The Shootist, 1976). After playing the quasi-autobiographical part of a legendary, outspoken Broadway actress in 1981's The Fan, she spent the next ten years portraying Lauren Bacall -- and no one did it better. In 1993, Bacall proved once more that she was a superb actress and not merely a "professional personality" in the made-for-cable film The Portrait, in which she and her Designing Woman co-star Gregory Peck played a still-amorous elderly couple.

During the filming of The Mirror Has Two Faces (1996), Bacall traveled to France to accept a special César Award for her lifetime achievement in film. For her role in Mirror, which cast her as Barbra Streisand's mother, Bacall earned a Golden Globe award and an Oscar nomination. She continued to work on a number of projects into the next decade, including Diamonds, in which she appeared alongside Kirk Douglas, with whom she last co-starred in the 1950 romantic drama Young Man With a Horn.

In the new century she worked twice with internationally respected filmmaker Lars von Trier, appearing in Dogville and Manderlay. She was in the Nicole Kidman film Birth, and appeared in the documentary Cameraman: The Life and Work of Jack Cardiff. Bacall won an Honorary Oscar in 2010. She died in 2014 at age 89.

Shortly after Humphrey Bogart's death, she announced her engagement to Frank Sinatra to the press. Sinatra promptly backed out.

Her screen persona was totally based and modeled after Howard Hawks's wife, Slim. She even uses her name in To Have and Have Not (1944).

Is one of the initial "Rat Pack" with Humphrey Bogart, Frank Sinatra, Irving Paul Lazar (aka "Swifty" Lazar) and their close friends.

Daughter Leslie Bogart was born on August 23, 1952. She was named after actor Leslie Howard, who helped Humphrey Bogart get his breakthrough role in the play, The Petrified Forest (1936).

When Howard Hawks discovered her, he gave her the choice to work with either Cary Grant or Humphrey Bogart. Bacall was very tempted to work with Grant, but Hawks ended up casting her with Bogart in To Have and Have Not (1944), and one of Hollywood's greatest romances was started.

[on Humphrey Bogart] "Was he tough? In a word, no. Bogey was truly a gentle soul."

[on John Huston] "He was about something."

"I think your whole life shows in your face and you should be proud of that."

On imagination: "Imagination is the highest kite that can fly."

[upon receiving her Honorary Oscar] "A man at last!"

[on filming her most famous scene, in To Have and Have Not (1944)] "My hand was shaking, my head was shaking, the cigarette was shaking, I was mortified. The harder I tried to stop, the more I shook. I realized that one way to hold my trembling head still was to keep it down, chin low, almost to my chest, and eyes up at Bogart. It worked and turned out to be the beginning of The Look."

[on "Confidential Agent"] "A very bad experience for Boyer and myself. He was wonderful. But Herman Schumin, who directed, knew nothing about movies. He gave me terrible direction, if any. It was just a nightmare. Schumlin did nothing to help. The press killed me - after building me into this combination of Gabo and Dietrich and Mae West and God-knows-who. Suddenly I became this nothing. I spent the next 20 years building myself back up to where I had any confidence at all in what I could do."

[on "A Woman's World"] "Not a giant hit, but I got terrific reviews. Clifton Webb was Bogie's old friend, and Fred MacMurray was terrific; he was someone else who was never appreciated."

[on "The Cobweb"] "We used to kid about that while making it; the movie was about the God-damned drapes. Vincente was a marvelous man, but totally visual. He was not so interested in actors."

[on Michael Curtiz] "His great talent was moving the camera around. "Bright Leaf" was a joke, but I was thrilled to work with Cooper. "Young Man," I thought was pretty good though Mike Curtiz was not the ideal director for the Bix Beiderbecke story."