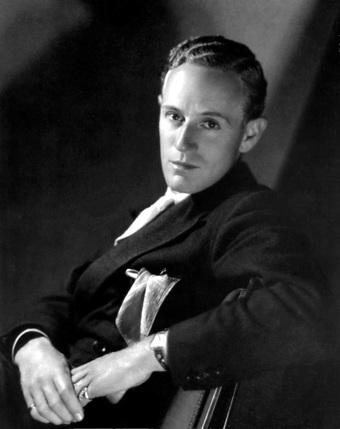 Son of a London stockbroker, British actor Leslie Howard worked as a bank clerk after graduating from London's Dulwich School. Serving briefly in World War I, Howard was mustered out for medical reasons in 1918, deciding at that time to act for a living. Working in both England and the U.S. throughout the 1920s, Howard specialized in playing disillusioned intellectuals in such plays as Outward Bound, the film version of which served as his 1930 film debut.

Other films followed on both sides of the Atlantic, the best of these being Howard's masterful star turn in The Scarlet Pimpernel (1934). In 1935, Howard portrayed yet another disenchanted soul in The Petrified Forest, which co-starred Humphrey Bogart as a gangster patterned after John Dillinger. Howard was tapped for the film version, but refused to make the movie unless Bogart was also hired (Warner Bros. had planned to use their resident gangster type, Edward G. Robinson). Hardly a candidate for "Mr. Nice Guy" -- he was known to count the lines of his fellow actors and demand cuts if they exceeded his dialogue -- Howard was nonetheless loyal to those he cared about.

Bogart became a star after The Petrified Forest, and in gratitude named his first daughter Leslie Bogart. Somehow able to hide encroaching middle-age when on screen, Howard played romantic leads well into his late 40s, none more so than the role of -- yes -- disillusioned intellectual Southern aristocrat Ashley Wilkes in the 1939 classic Gone with the Wind. In the late 1930s, Howard began dabbling in directing, notably in his starring films Pygmalion (1938) and Pimpernel Smith (1941). Fiercely patriotic, Howard traveled extensively on behalf of war relief; on one of these trips, he boarded a British Overseas Airways plane in 1943 with several other British notables, flying en route from England to Lisbon.

The plane was shot down over the Bay of Biscay and all on board were killed. Only after the war ended was it revealed that Howard had selflessly taken that plane ride knowing it would probably never arrive in Lisbon; it was ostensibly carrying Prime Minister Winston Churchill, and was sent out as a decoy so that Churchill's actual plane would be undisturbed by enemy fire.

Trivia:
Humphrey Bogart was so grateful at Howard's insistence that he repeat his stage performance in the film of The Petrified Forest (1936), the role that proved to be his big break in movies, that he named his daughter Leslie in Howard's honor.

According to a story in the "Southeast Missourian" newspaper, Howard could be a difficult man to track down, wandering off the set between takes. One day Tay Garnett, while directing Stand-In (1937), finally had several men look for him when he could not be found; they found him and, with the gentleness due a star, tied him up, clapping leg irons on him. Garnett put him on "probation", but gave Howard a cowbell and ordered him to bong the bell when on a stroll. It wasn't long before a scene was ready for shooting, but, again, no Howard. Soon enough they heard the cowbell, though, in a distant corner of the sound stage up in the catwalks. Converging on the sound, they found only the bell with a string attached. They traced the string over rafters back to the lighted set where "Stand-In" was suppose to be shooting. There sat Howard, yanking at the string, plaintively indignant about the absence of director Garnett.
Explore the simpler time of yesteryear...
A time when men and women were truly glamorous. A time when you could watch any movie with your children and not have to worry about gratuitous sex or violence – yet enjoy all the lustful inferences and edge-of-your-seat suspense.
Welcome to The Timeless Theater!
We're in the process of identifying which of our films are in the Public Domain, and offering these for sale on DVD.
​Please stay Tuned...!
Check out our new Film Noir Collection:
Coffee Mugs!
Phone Cases!
iPad Cases!
More coming soon!