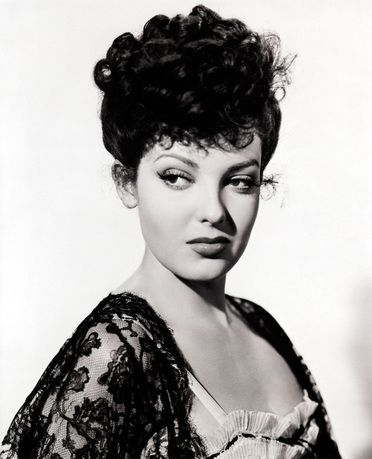 Daughter of a Texas postal clerk, actress Linda Darnell trained to be a dancer, and came to Hollywood's attention as a photographer's model. Though only 15, Darnell looked quite mature and seductive in her first motion picture, Hotel For Women (1937), and before she was twenty she found herself the leading lady of such 20th Century-Fox male heartthrobs as Tyrone Power and Henry Fonda.

Weary of thankless good-girl roles, Darnell scored a personal triumph when loaned out to United Artists for September Storm (1944), in which she played a "Scarlett O'Hara" type Russian vixen. Thereafter, 20th Century-Fox assigned the actress meatier, more substantial parts, culminating in the much-sought-after leading role in 1947's Forever Amber. Director Joseph L. Mankiewicz followed up this triumph by giving Darnell two of her best parts--Paul Douglas' "wrong side of the tracks" wife in A Letter to Three Wives (1949) and Richard Widmark's racist girlfriend in No Way Out (1950) (though befitting her star status, Darnell "reformed" at the end of both films).

When her Fox contract ended in 1952, Darnell found herself cast adrift in Hollywood, the good roles fewer and farther between; by the mid-1960s, she was appearing as a nightclub singer, touring in summer theatre, and accepting supporting roles on television. Tragically, Darnell died in 1965 of severe burns suffered in a house fire. Ironically, Darnell had a lifelong fear of dying in flames, speaking publicly of her phobia after appearing in a "burned at the stake" sequence in the 1946 film Anna and the King of Siam.

Trivia:
Died in a fire of unknown source while visiting friends. While sleeping upstairs and awakened by smoke, she tried to exit through the downstairs door, but was trapped. Badly burned over 90% of her body she died the following day in the hospital. Source: "Hollywood Beauty" by Ronald L. Davis University of Oklahoma Press.

Suffered from alcoholism during most of her career.

[about her time at Twentieth Century-Fox] "Leaving Fox was like leaving home at 28; I'd been there since I was 16."
Explore the simpler time of yesteryear...
A time when men and women were truly glamorous. A time when you could watch any movie with your children and not have to worry about gratuitous sex or violence – yet enjoy all the lustful inferences and edge-of-your-seat suspense.
Welcome to The Timeless Theater!
We're in the process of identifying which of our films are in the Public Domain, and offering these for sale on DVD.
​Please stay Tuned...!
Check out our new Film Noir Collection:
Coffee Mugs!
Phone Cases!
iPad Cases!
More coming soon!