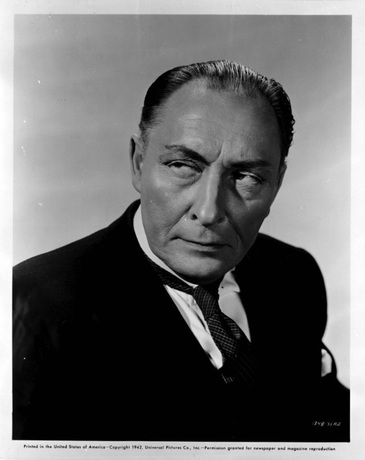 Lionel Atwill
Active - 1918 - 1946  |   Born - Mar 1, 1885 in Croydon, England  |   Died - Nov 20, 1946 in Santa Monica, Los Angeles, CA  |   Genres - Drama, Horror, Mystery, Crime, Action | Height: 5' 10½"
Lionel Atwill was born into a wealthy family and was educated at London's prestigious Mercer School to become an architect, but his interest turned to the stage. He worked his way progressively into the craft and debuted at age 20 at the Garrick Theatre in London. He acted and improved regularly thereafter, especially in the plays of Henrik Ibsen and George Bernard Shaw. Atwill came to the US in 1915 and would appear in some 25 plays on Broadway between 1917 and 1931, but he was already trying his hand in silent films by 1918. He had a sonorous voice and dictatorial British accent that served him well for the stage and just as well for sound movies. He did some Vitaphone short subjects in 1928 and then his first real film role in The Silent Witness (1932) (also titled "The Verdict").

That voice and his bullish demeanor made Atwill a natural for a spectrum of tough-customer roles. As shady noblemen and mad doctors, but also gruff military men and police inspectors (usually with a signature mustache), he worked steadily through the 1930s. He had the chance to show a broader character as the tyrannical but unforgettable Col. Bishop in Captain Blood (1935). It's hard to forget his Inspector Krogh in Son of Frankenstein (1939), wherein he agrees to a game of darts with Basil Rathbone and proceeds to impale the darts through the right sleeve of his uniform (the character sported a wooden right arm). And he sends himself up with rolling and blustering dialogue as the glory-hog ham stage actor Rawitch in the classic To Be or Not to Be (1942) with Jack Benny.

He was thereafter kept employed on Poverty Row with only brief periods of employment by Universal Pictures, while the rest of Hollywood turned its collective back on him. He is more remembered for the horror films generally than for better efforts, but they have fueled his continued popularity and a bid by the Southern California Lionel Atwill Fan Club to petition for a Hollywood Blvd. star (he never received one).

Trivia:
Died before completing his work on Lost City of the Jungle (1946). His remaining scenes were completed using a double.

His racy reputation for hosting "wild" parties at his home caught up with him and a sex scandal erupted. In 1943 he was sentenced to five years probation for perjury during a loosely connected rape trial. The Hays Office effectively blacklisted him from the top studios for his disgrace. The remainder of his career was spent doing a few plays in New York and low-budget "B" pictures and serials.

Acquired the nickname "Pinky" due to his reddish-tinged hair, which darkened over the years.

Narrated trailer for the 1932 prison movie, "Twenty Thousand Years in Sing Sing" as well as the classic "I Am a Fugitive from a Chain Gang.".

"One side of my face is gentle and kind, incapable of anything but love of my fellow man. The other side, the other profile, is cruel and predatory and evil, incapable of anything but the lusts and dark passions. It all depends on which side of my face is turned toward you--or the camera. It all depends on which side faces the moon at the ebb of the tide."

"There is something about horror that is horribly compelling. Is it because we see our possible selves in these dark mirrors?"

(In 1941) "All women love the men they fear. All women kiss the hand that rules them... I do not treat women in such soft fashion. Women are cat creatures. Their preference is for a soft fireside cushion, for delicate bowls of cream, for perfumed leisure and for a master - which is where and how they belong."
Explore the simpler time of yesteryear...
A time when men and women were truly glamorous. A time when you could watch any movie with your children and not have to worry about gratuitous sex or violence – yet enjoy all the lustful inferences and edge-of-your-seat suspense.
Welcome to The Timeless Theater!
We're in the process of identifying which of our films are in the Public Domain, and offering these for sale on DVD.
​Please stay Tuned...!
Check out our new Film Noir Collection:
Coffee Mugs!
Phone Cases!
iPad Cases!
More coming soon!