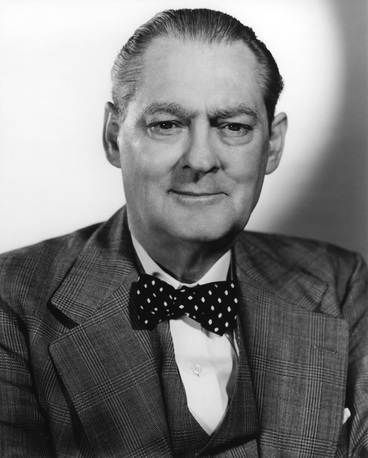 Like his younger brother John, American actor Lionel Barrymore wanted more than anything to be an artist. But a member of the celebrated Barrymore family was expected to enter the family trade, so Lionel reluctantly launched an acting career. Not as attractive as John or sister Ethel, he was most effectively cast in character roles - villains, military officers, fathers - even in his youth.

Unable to save what he earned, Barrymore was "reduced" to appearing in films for the Biograph Company in 1911, where he was directed by the great D.W. Griffith and where he was permitted to write a few film stories himself, which to Lionel was far more satisfying than playacting. His stage career was boosted when cast in 1917 as Colonel Ibbetson in Peter Ibbetson, which led to his most celebrated role, Milt Shanks in The Copperhead; even late in life, he could always count on being asked to recite his climactic Copperhead soliloquy, which never failed to bring down the house. Moving on to film, Barrymore was signed to what would be a 25-year hitch with MGM and begged the MGM heads to be allowed to direct; he showed only moderate talent in this field, and was most often hired to guide those films in which MGM wanted to "punish" its more rebellious talent.

Resigning himself to acting again in 1931, he managed to cop an Academy Award for his bravura performance as a drunken defense attorney in A Free Soul (1931), the first in an increasingly prestigious series of movie character parts. In 1937, Barrymore was crippled by arthritis, and for the rest of his career was confined to a wheelchair. The actor became more popular than ever as he reached his sixtieth birthday, principally as a result of his annual radio appearance as Scrooge in A Christmas Carol and his continuing role as Dr. Gillespie in MGM's Dr. Kildare film series.

Barrymore was aware that venerability and talent are not often the same thing, but he'd become somewhat lazy (if one can call a sixtyish wheelchair-bound man who showed up on time and appeared in at least three films per year "lazy") and settled into repeating his "old curmudgeon with a heart of gold" performance, save for the occasional topnotch part in such films as It's a Wonderful Life (1946) and Down to the Sea in Ships (1949).

Denied access to television work by his MGM contract, Barrymore nonetheless remained active in radio (he'd starred in the long-running series Mayor of the Town), and at one point conducted a talk program from his own home; additionally, the actor continued pursuing his hobbies of writing, composing music, painting and engraving until arthritis overcame him. On the day of his death, he was preparing for his weekly performance on radio's Hallmark Playhouse; that evening, the program offered a glowing tribute to Barrymore, never once alluding to the fact that he'd spent a lifetime in a profession he openly despised.

Trivia:
On radio, the role of Ebenezer Scrooge in annual broadcasts of "A Christmas Carol". This role led directly to his being cast as Mr. Potter in "It's A Wonderful Life".

He and his sister Ethel Barrymore were the first Oscar-winning brother and sister in acting categories.

"This is the age of insincerity. The movies had the misfortune to come along in the twentieth century, and because they appeal to the masses there can be no sincerity in them. Hollywood is tied hand and foot to the demands for artificiality of the masses all over the world."

[1943 comment on Margaret O'Brien] "If that child had been born in the middle ages, she'd have been burned as a witch."

[on how he intends to perform his role in 'Arsene Lupin'] "Oh, I'll stumble around, growl a little, limp a little bit."

"Don't ever forget that acting is the greatest profession ever invented. When you act, you move millions of people, shape their lives, give them a sense of exaltation. No other profession has that power."
Explore the simpler time of yesteryear...
A time when men and women were truly glamorous. A time when you could watch any movie with your children and not have to worry about gratuitous sex or violence – yet enjoy all the lustful inferences and edge-of-your-seat suspense.
Welcome to The Timeless Theater!
We're in the process of identifying which of our films are in the Public Domain, and offering these for sale on DVD.
​Please stay Tuned...!
Check out our new Film Noir Collection:
Coffee Mugs!
Phone Cases!
iPad Cases!
More coming soon!