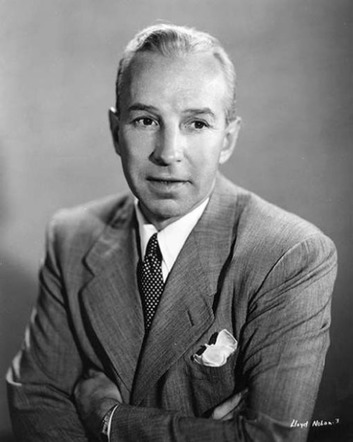 The son of a San Francisco shoe factory owner, American actor Lloyd Nolan made it clear early on that he had no intention of entering the family business. Nolan developed an interest in acting while in college, at the expense of his education -- it took him five years to get through Santa Clara College, and he flunked out of Stanford, all because of time spent in amateur theatricals. Attempting a "joe job" on a freighter, Nolan gave it up when the freighter burned to the waterline.

In 1927, he began studying at the Pasadena Playhouse, living on the inheritance left him by his father. Stock company work followed, and in 1933 Nolan scored a Broadway hit as vengeful small-town dentist Biff Grimes in One Sunday Afternoon (a role played in three film versions by Gary Cooper, James Cagney, and Dennis Morgan, respectively -- but never by Nolan). Nolan's first film was Stolen Harmony (1935); his breezy urban manner and Gaelic charm saved the actor from being confined to the bad guy parts he played so well, and by 1940 Nolan was, if not a star, certainly one of Hollywood's most versatile second-echelon leading men.

As film historian William K. Everson has pointed out, the secret to Nolan's success was his integrity -- the audience respected his characters, even when he was the most cold-blooded of villains. The closest Nolan got to film stardom was a series of B detective films made at 20th Century-Fox from 1940 to 1942, in which he played private eye Michael Shayne -- a "hard-boiled dick" character long before Humphrey Bogart popularized this type as Sam Spade. Nolan was willing to tackle any sort of acting, from movies to stage to radio, and ultimately television, where he starred as detective Martin Kane in 1951; later TV stints would include a season as an IRS investigator in the syndicated Special Agent 7 (1958), and three years as grumpy-growley Dr. Chegley on the Diahann Carroll sitcom Julia (1969-1971).

In 1953, Nolan originated the role of the paranoid Captain Queeg in the Broadway play The Caine Mutiny Court Martial, wherein he'd emerge from a pleasant backstage nap to play some of the most gut-wrenching "character deterioration" scenes ever written. Never your typical Hollywood celebrity, Nolan publicly acknowledged that he and his wife had an autistic son, proudly proclaiming each bit of intellectual or social progress the boy would make -- this at a time when many image-conscious movie star-parents barely admitted even having children, normal or otherwise.

Well liked by his peers, Nolan was famous (in an affectionate manner) for having a photographic memory for lines but an appallingly bad attention span in real life; at times he was unable to give directions to his own home, and when he did so the directions might be three different things to three different people. A thorough professional to the last, Nolan continued acting in sizeable roles into the 1980s; he was terrific as Maureen O'Sullivan's irascible stage-star husband in Woody Allen's Hannah and Her Sisters (1986).

Lloyd Nolan's last performance was as an aging soap opera star on an episode of the TV series Murder She Wrote; star Angela Lansbury, fiercely protective of an old friend and grand trouper, saw to it that Nolan's twilight-years reliance upon cue cards was cleverly written into the plot line of the episode.

Trivia:
Frequently portraying doctors in his later years, the actor bore a more than passing resemblance to famed Alabama physician Lloyd Noland - the spelling of their names differed by only a single letter.

Did not reveal he was terminally ill from lung cancer while doing his last acting role on Murder, She Wrote (1984) early in that show's second season. He appears to have filmed the show shortly before his 83rd birthday. It aired after his death six weeks later. The strain of fighting the illness had devastated his memory and much of his physical strength. Series star Angela Lansbury worked hard to get him through his scenes.

When John Ford rather coyly asked young John Wayne who he thought might be good as "The Ringo Kid" in Stagecoach (1939), Wayne suggested Nolan.
Explore the simpler time of yesteryear...
A time when men and women were truly glamorous. A time when you could watch any movie with your children and not have to worry about gratuitous sex or violence – yet enjoy all the lustful inferences and edge-of-your-seat suspense.
Welcome to The Timeless Theater!
We're in the process of identifying which of our films are in the Public Domain, and offering these for sale on DVD.
​Please stay Tuned...!
Check out our new Film Noir Collection:
Coffee Mugs!
Phone Cases!
iPad Cases!
More coming soon!