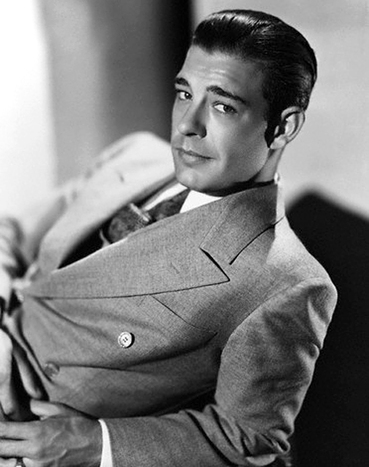 The son of actors Lon Chaney and Cleva Creighton, Creighton Tull Chaney was raised in an atmosphere of Spartan strictness by his father. He refused to allow Creighton to enter show business, wanting his son to prepare for a more "practical" profession; so young Chaney trained to be plumber, and worked a variety of relatively menial jobs despite his father's fame. After Lon Sr. died in 1930, Creighton entered movies with an RKO contract, but nothing much happened until, by his own recollection, he was "starved" into changing his name to Lon Chaney Jr. He would spend the rest of his life competing with his father's reputation as The Man With a Thousand Faces, hoping against hope to someday top Lon Sr. professionally. Unfortunately, he would have little opportunity to do this in the poverty-row quickie films that were his lot in the '30s, nor was his tenure (1937-1940) as a 20th Century Fox contract player artistically satisfying.

Hoping to convince producers that he was a fine actor in his own right, Chaney appeared as the mentally retarded giant Lennie in a Los Angeles stage production of John Steinbeck's Of Mice and Men. This led to his being cast as Lennie in the 1939 film version -- which turned out to be a mixed blessing. His reviews were excellent, but the character typed him in the eyes of many, forcing him to play variations of it for the next 30 years (which was most amusingly in the 1947 Bob Hope comedy My Favorite Brunette). In 1939, Chaney was signed by Universal Pictures, for which his father had once appeared in The Hunchback of Notre Dame (1923) and The Phantom of the Opera (1925); Universal was launching a new cycle of horror films, and hoped to cash in on the Chaney name. Billing Lon Jr. as "the screen's master character actor," Universal cast him as Dynamo Dan the Electric Man in Man Made Monster (1941), a role originally intended for Boris Karloff.

That same year, Chaney starred as the unfortunate lycanthrope Lawrence Talbot in The Wolf Man, the highlight of which was a transformation sequence deliberately evoking memories of his father's makeup expertise. (Unfortunately, union rules were such than Lon Jr. was not permitted to apply his own makeup). Universal would recast Chaney as the Wolf Man in four subsequent films, and cast him as the Frankenstein Monster in The Ghost of Frankenstein (1942) and the title role in Son of Dracula (1943). Chaney also headlined two B-horror series, one based upon radio's Inner Sanctum anthology, and the other a spin-off from the 1932 film The Mummy. Chaney occasionally got a worthwhile role in the '50s, notably in the films of producer/director Stanley Kramer (High Noon, Not as a Stranger, and especially The Defiant Ones), and he co-starred in the popular TV series Hawkeye and the Last of the Mohicans.

For the most part, however, the actor's last two decades as a performer were distinguished by a steady stream of cheap, threadbare horror films, reaching a nadir with such fare as Hillbillies in a Haunted House (1967). In the late '60s, Chaney fell victim to the same throat cancer that had killed his father, although publicly he tried to pass this affliction off as an acute case of laryngitis. Unable to speak at all in his last few months, he still grimly sought out film roles, ending his lengthy film career with Dracula vs. Frankenstein(1971). He died in 1973.

Trivia:
His career suffered in his later years due to alcoholism.

Attempted an early career as a songwriter.

Broderick Crawford, who had played Chaney's role of Lennie in "Of Mice and Men" on Broadway in 1937, worked with Chaney at one time and shared a dressing room with him. Apparently, both men were such heavy drinkers that they would get drunk together and take turns beating each other up.

Well-known character actor William Smith started out as a child actor, and in an interview with a horror-film magazine stated that during breaks on the set of The Ghost of Frankenstein (1942), Chaney treated all of the children on the set to ice cream.

"Nothing is more natural to me than horror."

"All the best of the monsters played for sympathy. That goes for my father, [Lon Chaney], myself and all the others. They all won the audience's sympathy. The Wolf Man didn't want to do all those bad things. He was forced into them."

"The trouble with most of the monster pictures today is that they go after horror for horror's sake. There's no motivation for how monsters behave. There's too much of that science-fiction baloney."
Explore the simpler time of yesteryear...
A time when men and women were truly glamorous. A time when you could watch any movie with your children and not have to worry about gratuitous sex or violence – yet enjoy all the lustful inferences and edge-of-your-seat suspense.
Welcome to The Timeless Theater!
We're in the process of identifying which of our films are in the Public Domain, and offering these for sale on DVD.
​Please stay Tuned...!
Check out our new Film Noir Collection:
Coffee Mugs!
Phone Cases!
iPad Cases!
More coming soon!