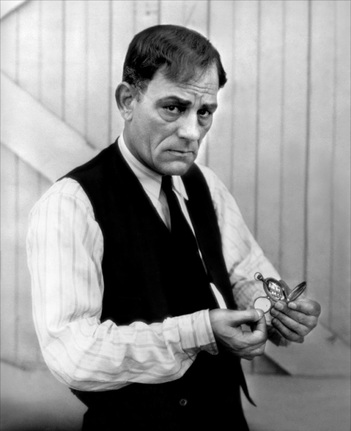 Even after 65 years, the phrase "Man of a Thousand Faces" brings to mind only one name: Lon Chaney Sr. The son of deaf-mute parents, he learned at an early age to rely on pantomime as a communication skill. The stagestruck Chaney worked in a variety of backstage positions at the opera house in his hometown of Colorado Springs; he was eventually allowed to appear on stage, and, before his 17th birthday, was on tour with a play he'd co-written with his brother.

Sensitive about his youth and plain features, Chaney hid behind elaborate makeup when appearing on-stage. Forced into single parenthood after divorcing his first wife Cleva Creighton (the mother of his son Creighton, Lon Chaney Jr.), Chaney had to find a more steady source of income than the theater. He began picking up extra work at Universal Studios in 1912, making himself valuable -- and ultimately indispensable -- with his expertise with character makeup. He rose from featured player to star at Universal between 1913 and 1920, sometimes doubling as director and scriptwriter.

Chaney's breakthrough film was 1919's The Miracle Man, in which he played a phony cripple. It was the first of many films in which he underwent severe physical discomfort to achieve a convincing screen effect; in The Penalty (1920), for example, he not only bound his legs to play a double amputee, but also contrived to jump from great heights and land on his knees. As Quasimodo in The Hunchback of Notre Dame (1923), Chaney wore a rubber hump weighing as much as 70 pounds, and the film made him a bona fide star.

After Universal's Phantom of the Opera (1925), the actor moved to MGM, where he starred in several highly successful Grand Guignol horror films directed by Tod Browning. Some of Chaney's best work during this period was actually done without makeup, in such bread-and-butter vehicles as Tell it to the Marines (1926) and The Big City (1928). Offscreen, he was a loner, preferring to live far from Hollywood with his son and second wife. When sound pictures took hold in 1929, Chaney initially refused to participate, concerned that he'd have to come up with a different voice for each performance; he finally acquiesced with 1930s The Unholy Three (a remake of his 1925 silent film success), in which he not only utilized four different vocal characterizations but also proved to be a superior performer in his natural voice.), but a growth in his throat developed into bronchial cancer.

He died in 1930 at the age of 47; in his last days, his illness rendered him unable to speak, forcing him to rely on the pantomimic gestures of his youth in order to communicate with his friends and loved ones.

Trivia:
A child of deaf mute parents, Chaney became a master of pantomime and understanding people who were born different.

Were it not for his death, Chaney, rather than Bela Lugosi, would have been Tod Browning's choice for the starring role in Dracula (1931).

A friend of Afro-American actor Noble Johnson since both were boys in Colorado together, Chaney was responsible for giving his old friend some early breaks in a career that spanned more than four decades. Likewise, Chaney befriended the young Boris Karloff shortly after the latter's arrival in Hollywood. As with Johnson, he helped Karloff gain a foothold in the movies, and until the end of his life, Karloff always spoke kindly of Chaney as a good friend and colleague.

Part of Chaney's makeup for the role of Quasimodo in The Hunchback of Notre Dame (1923) required that his right eye be buried under makeup, simulating a growth over that eye, as specified in the original Victor Hugo novel. The result of looking out of only one eye for weeks at a time left Chaney extremely short-sighted, and he had to wear thick glasses off screen for the rest of his life to correct this.

He carried almost all the make-up he used in films in a small leather case he always had with him when in Hollywood.

His knowledge of make-up was so vast that he wrote the entry on the subject for an edition of the Encyclopedia Britannica.

"My whole career has been devoted to keeping people from knowing me."

"When a makeup is as painful as that which I wore as Blizzard in The Penalty (1920), when I had my legs strapped up and couldn't bear it that way more than 20 minutes at a time - when I have to be a cripple, as in The Miracle Man (1919) or have to keep a certain attitude of body, as I did in Shadows (1922), it sometimes takes a good deal of imagination to forget your physical sufferings. Yet, at that, the subconscious mind has a marvelous way of making you keep the right attitudes and make the right gestures when you are actually acting."

"There's nothing funny about a clown in the moonlight."

[advice to Boris Karloff] "Find something no one else can or will do. The secret of success in movies lies in being different from anyone else."

"One of the most difficult characters I ever played from the make-up standpoint was that of a blind boy. All through that picture in order to look blind I had to roll my eyes clear up in what seemed to me to be the very top of my head. Did you ever try to do that? Try it, and then at the same time try to act naturally. You'll get my idea then."
Explore the simpler time of yesteryear...
A time when men and women were truly glamorous. A time when you could watch any movie with your children and not have to worry about gratuitous sex or violence – yet enjoy all the lustful inferences and edge-of-your-seat suspense.
Welcome to The Timeless Theater!
We're in the process of identifying which of our films are in the Public Domain, and offering these for sale on DVD.
​Please stay Tuned...!
Check out our new Film Noir Collection:
Coffee Mugs!
Phone Cases!
iPad Cases!
More coming soon!