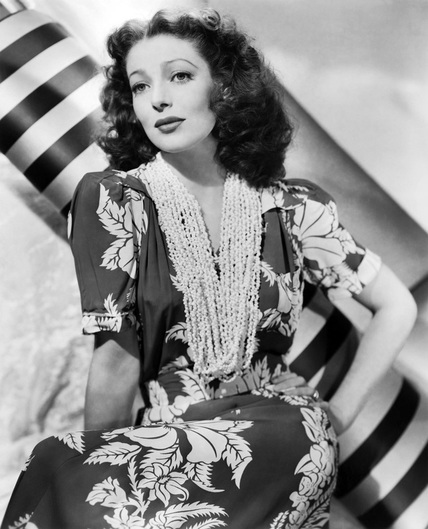 Sweet, sweeter, sweetest. No combination of terms better describes the screen persona of lovely Loretta Young. A&E's Biography (1987) has stated that Young "remains a symbol of beauty, serenity, and grace. But behind the glamor and stardom is a woman of substance whose true beauty lies in her dedication to her family, her faith, and her quest to live life with a purpose."

Loretta Young was born Gretchen Young in Salt Lake City, Utah on January 6, 1913, to Gladys (Royal) and John Earle Young. Her parents separated when Loretta was three years old. Her mother moved Loretta and her two older sisters to Southern California, where Mrs. Young ran a boarding house. When Loretta was 10, her mother married one of her boarders, George Belzer. They had a daughter, Georgianna, two years later.

Loretta was appearing on screen as a child extra by the time she was four, joining her elder sisters, Polly Ann Young and Elizabeth Jane Young (later better known as Sally Blane), as child players. Mrs. Young's brother-in-law was an assistant director and got young Loretta a small role in the film The Only Way (1914). The role consisted of nothing more than a small, weeping child lying on an operating table. Later that year, she appeared in another small role, in The Primrose Ring (1917). The film starred Mae Murray, who was so taken with little Loretta that she offered to adopt her. Loretta lived with the Murrays for about a year and a half. In 1921, she had a brief scene in The Sheik (1921).

Loretta and her sisters attended parochial schools, after which they helped their mother run the boarding house. In 1927, Loretta returned to films in a small part in Naughty But Nice (1927). Even at the age of fourteen, she was an ambitious actress. Changing her name to Loretta Young, letting her blond hair revert to its natural brown and with her blue eyes, satin complexion and exquisite face, she quickly graduated from ingénue to leading lady. Beginning with her role as Denise Laverne in The Magnificent Flirt (1928), she shaped any character she took on with total dedication. In 1928, she received second billing in The Head Man (1928) and continued to toil in many roles throughout the '20s and '30s, making anywhere from six to nine films a year. Her two sisters were also actresses but were not as successful as Loretta, whose natural beauty was her distinct advantage.

Young made headlines in 1930 when she and Grant Withers, who was previously married and nine years her senior, eloped to Yuma, Arizona, with the 17-year-old Loretta. They had both appeared in Warner Bros.' The Second Floor Mystery (1930). The marriage was annulled in 1931, the same year in which the pair would again co-star on screen in a film ironically titled Too Young to Marry (1931). By the mid-'30s, Loretta left First National Studios for rival Fox, where she had previously worked on a loan-out basis, and became one of the premiere leading ladies of Hollywood.

In 1935, she made Call of the Wild (1935) with Clark Gable. They had an affair, and Loretta became pregnant. Because of the strict morality clauses in their contracts - and the fact that Clark Gable was married - they could not tell anybody except Loretta's mother. Loretta and her mother left for Europe where Loretta delivered a healthy baby girl on November 6, 1935, whom she named Judith.

In 1938, Loretta starred as Sally Goodwin in Kentucky (1938), an outstanding success. Her co-star Walter Brennan won the Academy Award for Best Supporting Actor for his role as Peter Goodwin.

In 1940, Loretta married businessman Tom Lewis, and from then on her child was called Judy Lewis, although Tom Lewis never adopted her. Judy was brought up thinking that both parents had adopted her and did not know, until years later, that she was actually the biological daughter of Loretta and Clark Gable. Four years after her marriage to Tom Lewis, Loretta had a son, Christopher Lewis, and later another son, Peter Charles.

In the 1940s, Loretta was still one of the most beautiful ladies in Hollywood. She reached the pinnacle of her career when she won the Academy Award for Best Actress in The Farmer's Daughter (1947), the tale of a farm girl who rises through the ranks and becomes a congresswoman. It was a smash and today is her best remembered film. The same year, she starred in the delightful fantasy The Bishop's Wife (1947) with David Niven and Cary Grant. It was another box office success and continues to be a TV staple during the holiday season. In 1949, Loretta starred in the well-received film, Mother Is a Freshman (1949) with Van Johnson and Rudy Vallee and Come to the Stable (1949). The latter garnered Loretta her second Oscar nomination, but she lost to Olivia de Havilland in The Heiress (1949). In 1953, Loretta made It Happens Every Thursday (1953), which was to be her final big screen role.

She retired from films in 1953 and began a second, equally successful career as hostess of The Loretta Young Show (1953), a half-hour television drama anthology series which ran on NBC from September 1953 to September 1961. In addition to hosting the series, she frequently starred in episodes. Although she is most remembered for her stunning gowns and swirling entrances, over the broadcast's eight-year run she also showed again that she could act. She won Emmy awards for best actress in a dramatic series in 1954, 1956 and 1958.

After the show ended, she took some time off before returning in 1962 with The New Loretta Young Show (1962), which was not so successful, lasting only one season. For the next 24 years, Loretta did not appear in any entertainment medium. Her final performance was in a made for TV film Lady in the Corner (1989).

By 1960, Loretta was a grandmother. Her daughter Judy Lewis had married about three years before and had a daughter in 1959, whom they named Maria. Loretta and Tom Lewis divorced in the early 1960's. Loretta enjoyed retirement, sleeping late, visiting her son Chris and daughter-in-law Linda, and traveling. She and her friend Josephine Alicia Saenz, ex-wife of John Wayne, traveled to India and saw the Taj Mahal. In 1990, she became a great-grandmother when granddaughter Maria, daughter of Judy Lewis, gave birth to a boy.

Loretta lived a quiet retirement in Palm Springs, California until her death on August 12, 2000 from ovarian cancer at the home of her sister Georgiana and Georgiana's husband, Ricardo Montalban.

Trivia:
Had an illegitimate daughter by Clark Gable. For years, this was covered up in Hollywood, and was presented as an adoption. The daughter's resemblance to both parents is uncanny. The daughter Judy Lewis later dabbled in acting before becoming a psychologist. Judy Lewis wrote a book "Uncommon Knowledge" with the truth of her parentage.

She died at the home of her sister Georgiana Montalban and Georgiana's husband, actor Ricardo Montalban, in the early morning of August 12, 2000.

In her posthumously published autobiography, she admitted that her "adopted" daughter, Judy Lewis, was her biological daughter by Clark Gable.

Marlene Dietrich said of her: "Every time she 'sins,' she builds a church. That's why there are so many Catholic churches in Hollywood.".

Turned down the part of Ellie Andrews in It Happened One Night (1934). Claudette Colbert was then given the role and won a Best Actress Oscar for her performance.

"A face that is really lovely in repose can fall apart if, when its owner stars to talk, she distorts every feature."

"A pleasant voice, which has to include clear enunciation, is not only attractive to those who hear it... its appeal is permanent."

On strategy: "The trick to life, I can say now in my advanced age, is to stop trying to make it so important."

[when offered the role of Miriam in Hush...Hush, Sweet Charlotte (1964) after Joan Crawford became ill] "I don't believe in horror stories for women and I wouldn't play a part like that if I were starving."

"No. They're all better than I was. We had our favorites in our period, too. Bette Davis and Ingrid Bergman were the two best actresses. They were both so honest, full of integrity, both of them. Both of them so vulnerable. I don't I think you'll ever see a better performance on film than Bette Davis in The Little Foxes (1941) or Now, Voyager (1942). Bette really really really was talented. Had the energy of a bull. And there wasn't a mean bone in her body."