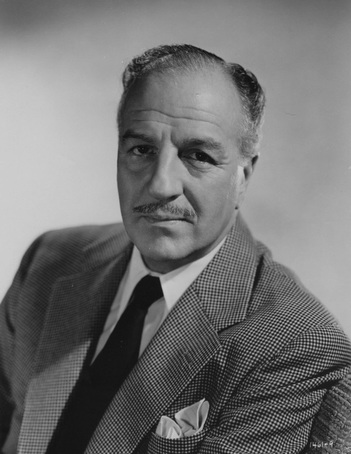 Born in New York City, Louis Calhern moved to St. Louis with his family as a child. There he played high-school football, and while engaged in gridiron activity he was spotted by a theatrical manager and hired as a supernumerary in a local stage troupe. Borrowing money from his father, Calhern headed to New York to pursue acting.

Because World War I was going on at the time, the young actor thought it expedient to change his Teutonic given name of Carl Henry Vogt ("Calhern" was a rearrangement of the letters in his first and second names). After his first Broadway break in the 1923 George M. Cohan production Song and Dance Man, the tall, velvet-voiced Calhern became a matinee idol by virtue of a play titled The Cobra. In films from 1921, Calhern thrived in the early talkie era as a cultured, saturnine villain.

For a time, Calhern battled alcoholism and lost several important stage and screen assignments because of his personal problems, but by the late 1940s, Calhern had gone cold turkey and completely cleaned up his act. He was brilliant as Oliver Wendell Holmes in both the Broadway and film versions of The Magnificent Yankee, and from 1950 onward made several well-reviewed appearances as Shakespeare's King Lear (his favorite role).

An MGM contract player throughout the 1950s, Calhern was seen as Buffalo Bill in Annie Get Your Gun (1950), the above-suspicion criminal mastermind (and "uncle" of kept woman Marilyn Monroe) in The Asphalt Jungle (1950), and the title character in Julius Caesar (1953). Louis Calhern died of a sudden heart attack while filming The Teahouse of the August Moon in Japan; he was replaced by character actor Paul Ford.

In Executive Suite (1954) he plays an unscrupulous businessman who tries to take advantage of the situation after the president of a corporation dies unexpectedly of a heart attack. Calhern also died suddenly from the same cause.

Appeared as a character in Gore Vidal's 1974 novel "Myron," his sequel to Myra Breckinridge (1970), co-starring with Maria Montez and Bruce Cabot in the apocryphal movie "Siren of Babylon" that is being shot on the Metro-Goldwyn-Mayer lot in 1948 in the novel. In the "movie," Calhern "played" the role of the Babylonian King Nebuchadnezzar.
Explore the simpler time of yesteryear...
A time when men and women were truly glamorous. A time when you could watch any movie with your children and not have to worry about gratuitous sex or violence – yet enjoy all the lustful inferences and edge-of-your-seat suspense.
Welcome to The Timeless Theater!
We're in the process of identifying which of our films are in the Public Domain, and offering these for sale on DVD.
​Please stay Tuned...!
Check out our new Film Noir Collection:
Coffee Mugs!
Phone Cases!
iPad Cases!
More coming soon!