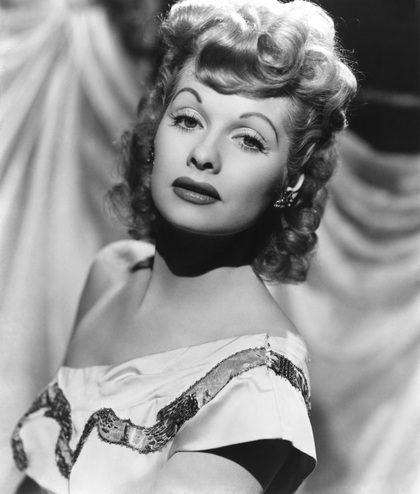 The woman who will always be remembered as the crazy, accident-prone, lovable Lucy Ricardo was born Lucille Desiree Ball on August 6, 1911 in Jamestown, New York. Her father died before she was four, and her mother worked several jobs, so she and her younger brother were raised by their grandparents. Always willing to take responsibility for her brother and young cousins, she was a restless teenager who yearned to "make some noise".

She entered a dramatic school in New York City, but while her classmate Bette Davis received all the raves, she was sent home; "too shy". She found some work modeling for Hattie Carnegie's and, in 1933, she was chosen to be a "Goldwyn Girl" and appear in the film Roman Scandals (1933).

She was put under contract to RKO Radio Pictures and several small roles, including one in Top Hat (1935), followed. Eventually, she received starring roles in B-pictures and, occasionally, a good role in an A-picture, like in Stage Door (1937) or The Big Street (1942). While filming Too Many Girls (1940), she met and fell madly in love with a young Cuban actor-musician named Desi Arnaz. Despite different personalities, lifestyles, religions and ages (he was six years younger), he fell hard, too, and after a passionate romance, they eloped and were married in November 1940.

Lucy soon switched to Metro-Goldwyn-Mayer, where she got better roles in films such as Du Barry Was a Lady (1943); Best Foot Forward (1943) and the Katharine Hepburn-Spencer Tracy vehicle Without Love (1945). In 1948, she took a starring role in the radio comedy "My Favorite Husband", in which she played the scatterbrained wife of a Midwestern banker. In 1950, CBS came knocking with the offer of turning it into a television series. After convincing the network brass to let Desi play her husband and to sign over the rights to and creative control over the series to them, work began on the most popular and universally beloved sitcom of all time.

With I Love Lucy (1951), she and Desi pioneered the 3-camera technique now the standard in filming sitcoms, and the concept of syndicating television programs. She was also the first woman to own her own studio as the head of Desilu Productions. Lucille Ball died at home, age 77, of an acute aortic aneurysm on April 26, 1989 in Beverly Hills, California.

Trivia:
A comment from a member of the preview audience of Follow the Fleet (1936) about bit-player Ball: "You might give the tall gum chewing blonde more parts and see if she can't make the grade - a good gamble."

Ball and Barbara Pepper met early in their careers when they were both "Goldwyn Girls" and remained lifelong friends.

During a Barbara Walters interview, Jane Fonda claimed that her father, Henry Fonda, was deeply in love with Lucille Ball and that the two were "very close" during the filming of Yours, Mine and Ours (1968).

Was the first woman to own her own film studio as the head of Desilu Productions.

Died the morning of April 26, 1989, the fifty-sixth birthday of her friend Carol Burnett. That afternoon Burnett received the flowers that Ball had ordered for her birthday.

During the 1933 filming of Roman Scandals (1933), young Lucille Ball, portraying a slave girl, needed to have her eyebrows entirely shaved off. They never grew back.

Lucy and Desi Arnaz began I Love Lucy (1951) in the hopes of saving their crumbling marriage.

She was fired from working at an ice cream store because she kept forgetting to put bananas in banana splits.

Was one of the 20 original "Goldwyn Girls", along with Virginia Bruce; Ann Dvorak; Paulette Goddard and Betty Grable.

Her favorite movie she made was The Big Street (1942). Up to her dying day, she resented AMPAS for not recognizing her performance in the movie by including her for an Academy Award nomination.

Felt that she did not deserve the title of "Queen of Comedy" and felt that it belonged to her idol, Carole Lombard.

While still contemplating whether to do the I Love Lucy (1951) shows, she claimed that in her dream, Carole Lombard came to her and told her to "Give it a whirl".

Had a superstition about the letters A and R, which is why her character was named Lucy RicARdo in I Love Lucy (1951); Lucy CARmichael in The Lucy Show (1962); Lucy CARter in Here's Lucy (1968) and Lucy BARker in Life with Lucy (1986) (she was also married to 'Desi ARnaz'). She believed she didn't have luck in her career until she changed her name to Arnaz.

Was offered the role of Angel in The Greatest Show on Earth (1952), but was forced to turn it down due to pregnancy. Gloria Grahame was later cast instead.

Became very good friends with Maureen O'Hara during the making of Dance, Girl, Dance (1940) and continued being friends until Ball's death. O'Hara was with Lucille when Lucille first met her first husband, Desi Arnaz.

"I don't know anything about luck. I've never banked on it, and I'm afraid of people who do. Luck to me is something else: hard work and realizing what is opportunity and what isn't."

"The secret of staying young is to live honestly, eat slowly, and lie about your age."

"Once in his life, every man is entitled to fall madly in love with a gorgeous redhead."

"A man who correctly guesses a woman's age may be smart, but he's not very bright."

"Desi (Desi Arnaz) was the great love of my life. I will miss him until the day I die."

[About Edith Head]: "Edie knew the truth about all of us. She knew who had flat fannies and who didn't -- but she never told."

[on Audrey Hepburn] "She's a tomboy and a fine comedienne. You'd never think of her being able to do my type of comedy. But she can. She has great energy, frail as she looks. But, well, she's so beautiful, so ethereal, it would be sacrilege to put her through it."

[on Buster Keaton] "He taught me most of what I know about timing, how to fall and how to handle props and animals."

[on Vivian Vance] "I find that now I usually spend my time looking at Viv. Viv was sensational. And back then, there were things I had to do-I was in the projection room for some reason, and I just couldn't concentrate on it. But now I can. And I enjoy every move that Viv made. She was something."

"I died my hair this crazy red to bid for attention. It has become a trademark and I've got to keep it this way."

[About her drama school experience in 1926] "I was a tongue-tied teenager spellbound by the schools star pupil - Bette Davis."

[on Desi Arnaz] "He did make me happy, and I really want people to know that."
Explore the simpler time of yesteryear...
A time when men and women were truly glamorous. A time when you could watch any movie with your children and not have to worry about gratuitous sex or violence – yet enjoy all the lustful inferences and edge-of-your-seat suspense.
Welcome to The Timeless Theater!
We're in the process of identifying which of our films are in the Public Domain, and offering these for sale on DVD.
​Please stay Tuned...!
Check out our new Film Noir Collection:
Coffee Mugs!
Phone Cases!
iPad Cases!
More coming soon!