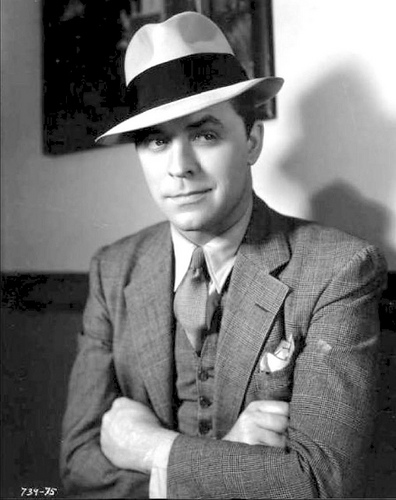 Born into a family of travelling show folk, Lyle Talbot toured the hinterlands as a teen-aged magician. Talbot went on to work as a regional stock-company actor, pausing long enough in Memphis to form his own troupe, the Talbot Players. Like many other barnstorming performers of the 1920s, Talbot headed to Hollywood during the early-talkie era.

Blessed with slick, lounge-lizard good looks, he started out as a utility lead at Warner Bros. Talbot worked steadily throughout the 1930s, playing heroes in B pictures and supporting parts in A pictures. During a loanout to Monogram Pictures in 1932, he was afforded an opportunity to co-star with Ginger Rogers in a brace of entertaining mysteries, The 13th Guest and The Shriek and the Night, which were still making the double-feature rounds into the 1940s. In 1935, Talbot and 23 other film players organized the Screen Actors Guild; to the end of his days, he could be counted upon to proudly display his SAG Card #4 at the drop of a hat.

As his hairline receded and his girth widened, Talbot became one of Hollywood's busiest villains. He worked extensively in serials, playing characters on both sides of the law; in 1949 alone, he could be seen as above-suspicion Commissioner Gordon in Batman and Robin and as duplicitous Lex Luthor in Atom Man Vs. Superman. He remained in harness in the 1950s, appearing on Broadway and television. Two of his better-known assignments from this period were Joe Randolph on TV's The Adventures of Ozzie and Harriet and as Bob Cummings' lascivious Air Force buddy Paul Fonda on Love That Bob.

Seemingly willing to work for anyone who met his price, Talbot had no qualms about appearing in the dregs of cheapo horror films of the fifties. He was prominently cast in two of the estimable Edward D. Wood's "classics," Glen or Glenda (1953) and Plan Nine From Outer Space (1955). When asked what it was like to work for the gloriously untalented Wood, Talbot would recall with amusement that the director never failed to pay him up front for each day's work with a handful of stained, crinkly ten-dollar bills. Though he made his last film in 1960, Lyle Talbot continued touring in theatrical productions well into the late 1970s, regaling local talk-show hosts with his bottomless reserve of anecdotes from his three decades in Hollywood.

Trivia:
Father of public television producer Stephen Talbot, a former child actor who was best known as Beaver's friend Gilbert on Leave It to Beaver (1957).

In the mid to late 1950s he was featured in two TV series at the same time, playing the recurring roles of the star's "best friend" on The Adventures of Ozzie & Harriet (1952) and The Bob Cummings Show (1955).

"You kids think you invented free love in the Sixties. You have no idea what it was like to be young and beautiful in the Thirties in Hollywood. Everyone was sleeping with everyone."

[on working for Sam Katzman] "Sam Katzman had a reputation as one of the cheapest guys in the world. I never had any idea that Atom Man vs. Superman (1950) would remain so popular. At the time it was a three-week job. Even so, I loved playing Lex Luthor. I could put on my meanest face. I used to have the attitude that it was better to work than sit home idle, and as a result I did a lot of things that weren't the greatest. But that was my fault."
Explore the simpler time of yesteryear...
A time when men and women were truly glamorous. A time when you could watch any movie with your children and not have to worry about gratuitous sex or violence – yet enjoy all the lustful inferences and edge-of-your-seat suspense.
Welcome to The Timeless Theater!
We're in the process of identifying which of our films are in the Public Domain, and offering these for sale on DVD.
​Please stay Tuned...!
Check out our new Film Noir Collection:
Coffee Mugs!
Phone Cases!
iPad Cases!
More coming soon!