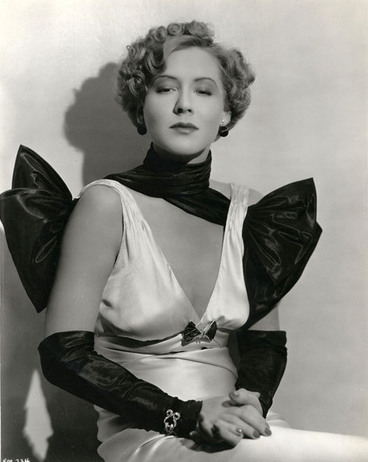 Vivacious, blonde Mae Clarke was exposed to cinema from an early age, her father being an organist in a motion picture theatre. Growing up in Atlantic City, New Jersey, she learned how to dance and, at the tender age of 13, was already performing in nightclubs and amateur theatricals. In 1924 she was one of "May Dawson's Dancing Girls", a New York cabaret act, where she was "discovered" by producer Earl Lindsay and promptly cast in a minor part at the Strand Theatre on Times Square. She then performed as a dancer and burlesque artist at the Strand Roof nightclub, situated above the theatre (which was managed by Lindsay), and at the Everglades Club, earning $40 a week. While there she struck up a lifelong friendship with fellow actress Ruby Stevens, who would later change her name to Barbara Stanwyck.

In 1926 Mae got her first chance in "legitimate" theater, appearing in the drama "The Noose" with Stanwyck and Ed Wynn. This was followed by the musical comedy "Manhattan Mary" (1927). After further vaudeville experience Mae was screen-tested by Fox and landed her first movie role in 1929. While she was top-billed in films like Nix on Dames (1929), she was clearly headed for B-movie status and left Fox just over a year later. This resulted in better roles for her, though she was generally cast in "hard-luck" roles.

She played prostitute Molly Malloy in the hugely successful Lewis Milestone-directed The Front Page (1931)) and, on the strength of this performance, was signed by Carl Laemmle Jr. at Universal and cast to star in Waterloo Bridge (1931) (as a ballerina-turned-streetwalker, a part made famous by Vivien Leigh in the MGM remake, Waterloo Bridge (1940)). Reviewer Mordaunt Hall described Mae's complex performance as "capital" (New York Times, September 5, 1931).

Also in 1931 she had the brief but memorable role for which she will always be known: the hapless girlfriend on the receiving end of a grapefruit pushed into her face by James Cagney in The Public Enemy (1931). She later appeared with Cagney (a close friend in real life) in still more adversarial scenes, in Lady Killer (1933) and Great Guy (1936). Mae also had some feisty comedy roles, in Three Wise Girls (1932) with Jean Harlow, and starring in Parole Girl (1933). She was third-billed in James Whale's Frankenstein (1931), as Elizabeth, the title character's bride-to-be. Her best moment in the film, one of sheer terror, comes when she is confronted by the monster (Boris Karloff) in her own bedroom.

Mae's career suffered several major setbacks, beginning in 1932, from which it never fully recovered. She had a nervous breakdown in June of that year (and another in 1934), most likely caused by overwork and marital problems. This was followed by a serious car accident in March of 1933. In addition to that, her sexy screen personae became limited by the new, strict Hollywood production code. When she returned to the screen, it was to be in B-pictures. She had some rewarding parts in some films for Republic, notably The House of a Thousand Candles (1936) and the civil war romance Hearts in Bondage (1936), with Lew Ayres.

Despite an image change from frizzy blonde to brunette, she had few opportunities to shine after 1938, except, perhaps, as heroine of the Republic serial King of the Rocket Men (1949). By the beginning of the 1950's, Mae was largely reduced to doing cameos and walk-ons, at best playing minor parts in westerns. She did, however, make several notable appearances on television, particularly on The Loretta Young Show (1953).

Mae Clarke, an undeniable star of pre-code Hollywood, fell on hard financial times towards the end of her life. After her last film appearance in Watermelon Man (1970), she retired to the Motion Picture & Television Country House and Hospital and devoted her remaining years to her favorite hobby: painting in the style of Swiss abstract artist Paul Klee. She died there of cancer in April 1992.

Trivia:
Immortal as the recipient of James Cagney's classic grapefruit-in-the-face in The Public Enemy (1931).

In her late 70s she worked in the "Court of Miracles" show at the Universal Studios Tour in Hollywood, not far from where she had filmed her role as Dr. Frankenstein's wife in Frankenstein (1931).

Collaborated on shooting three movies with director James Whale in 1931, when both were under contract to Universal: "Waterloo Bridge," "Frankenstein," and "Impatient Maiden.".

[on Colin Clive] "Colin Clive was the dearest, kindest (in the real meaning of the word 'kind') man, who gave you importance. He was so wonderful, so clever. When he started acting in a scene, I wanted to stop and just watch... I'd think, " Here I am, playing scenes with this marvelous actor! Mr. Whale would say, "Colin's voice is like a pipe organ... I just pull out the stops, and he produces the music." Colin was electric. I was mesmerized by him - so much so that I hoped it didn't show! When he looked at me, I'd flush. He had a wife back in England, and I had my young man (of the "Waterloo Bridge" premiere.) In fact, I was glad my fiancé was at the premiere that night - to be my good anchor against my stormy waves of fancy for Colin. He was the handsomest man I ever saw - and also the saddest. Colin's sadness was elusive; the sadness you see if you contemplate many of the master painters' and sculptors' conceptions of the face of Christ - the ultimate source in my view of all sadness."

[on James Whale] "I knew James Whale was imported as one of England's very best and was aware of the great success of the play and film "Journey's End." I wanted to meet Mr. Whale the way I would have entered college to begin learning... Our relationship was the adoration between a teacher (who was expert) and a pupil (who was most willing.) And our objectives became 'What did the author want? What did he not say and assumed we would? We could forget ourselves.'"
Explore the simpler time of yesteryear...
A time when men and women were truly glamorous. A time when you could watch any movie with your children and not have to worry about gratuitous sex or violence – yet enjoy all the lustful inferences and edge-of-your-seat suspense.
Welcome to The Timeless Theater!
We're in the process of identifying which of our films are in the Public Domain, and offering these for sale on DVD.
​Please stay Tuned...!
Check out our new Film Noir Collection:
Coffee Mugs!
Phone Cases!
iPad Cases!
More coming soon!