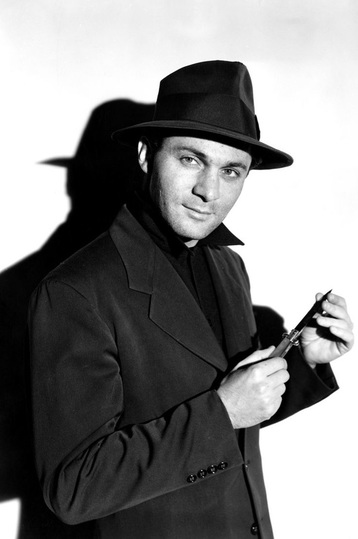 After attending City College of New York, Marc Lawrence studied acting with Eva Le Gallienne. Among the many stage productions in which Lawrence appeared were Sour Mountain and Waiting for Lefty. First signed for films by Columbia in 1932, Lawrence's scarred face and growly voice made him indispensable for gangster parts, though he generally displayed an intelligence far higher than the average goon or gunman.

Though usually limited to villainy, Lawrence was not always confined to urban roles, as witness his successful portrayals of a mountaineer in Shepherd of the Hills (1942) and a western saddle tramp in The Ox-Bow Incident (1943). The actor's own favorite role was Corio in 1947's Captain from Castille. During the House UnAmerican Activities Committee investigations of the 1950s, Lawrence reluctantly offered testimony implicating several of his coworkers as alleged communist sympathizers; the experience virtually destroyed his American career and left him embittered and defensive (he would always refuse to be interviewed by historians of the "Blacklist" era, referring to them as "ghouls").

Lawrence was forced to seek out work in Europe, where he'd emerge in the early 1960s as a director of crime films and spaghetti westerns. Back in the U.S. in the 1980s, Lawrence made several TV appearances and showed up in such films as The Big Easy (1987) and Newsies (1992), typecast once more as gangsters. In 1993, Lawrence privately published his memoirs, in which for the first time in print he addressed his dark days as an HUAC "friendly witness."

Trivia:
Was a victim of the Hollywood blacklist in 1950 and, as a result, was forced to leave the US to continue working as an actor.

Named actor Jeff Corey, a former Communist Party member who had left behind the party and the ideology, as a communist before the House Un-American Activities Committee. Corey, who was subsequently blacklisted from 1951 through 1962, was bitter over Lawrence's action for the rest of his long life.

Columbia Pictures chief Harry Cohn once told Lawrence that Johnny Roselli, a notorious gangster, had said that he was the best hood in films. Lawrence himself was often told by Italian hoods in his native New York that he played them better than anyone else; ironically, Lawrence is Jewish.

He was a friend of legendary mob boss Lucky Luciano. He would visit Luciano in Italy where the mobster had been deported following his prison term for running a prostitution ring. Whenever Lawrence would see the mobster, Lucky would always ask for him to talk in an "exaggerated" New York accent, which Lawrence would do. The reason was that Luciano missed New York and meeting New Yorkers and hearing their accents would always make him feel better.

In spite of a prolific career covering nearly 70 years, consisting hundreds of motion picture appearances and many more television spots, his name was not included in the necrology of deceased film actors in the previous year at the 2006 Academy Awards (Oscar) Show.

"I had this effect on people. I remember walking along the street and seeing Eddie Cantor's name up on one of the theaters, so I stopped by the ticket seller and asked him, 'When does Eddie go on?' He looked at me and went pale and said, 'You-you-you-you're the guy in that picture up the street!' He was petrified of me. So I went and watched that movie again and thought to myself 'Christ Almighty, what an ugly [expletive]!' Holes in my face, black eyes that pierce right through you. Here I thought I looked like Ronald Colman and the ticket seller was right."

"I was typed as the arch gangster. It's this face -- what could I do about it?"
Explore the simpler time of yesteryear...
A time when men and women were truly glamorous. A time when you could watch any movie with your children and not have to worry about gratuitous sex or violence – yet enjoy all the lustful inferences and edge-of-your-seat suspense.
Welcome to The Timeless Theater!
We're in the process of identifying which of our films are in the Public Domain, and offering these for sale on DVD.
​Please stay Tuned...!
Check out our new Film Noir Collection:
Coffee Mugs!
Phone Cases!
iPad Cases!
More coming soon!