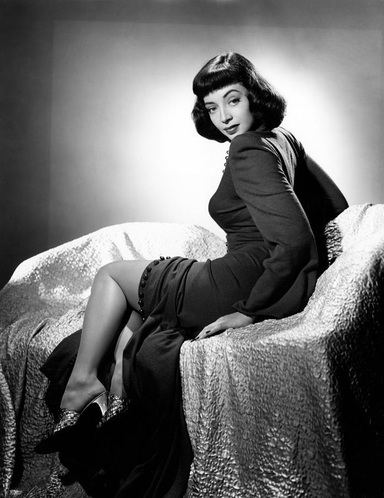 A Utah girl born and bred, actress Marie Windsor attended Brigham Young University and represented her state as Miss Utah in the Miss America pageant. She studied acting under Russian stage and screen luminary Maria Ouspenskaya, supporting herself as a telephone operator between performing assignments. After several years of radio appearances and movie bits, Windsor was moved up to feature-film roles in 1947's Song of the Thin Man.

She was groomed to be a leading lady, but her height precluded her co-starring with many of Hollywood's sensitive, slightly built leading men. (She later noted with amusement that at least one major male star had a mark on his dressing room door at the 5'6" level; if an actress was any taller than that, she was out.) Persevering, Windsor found steady work in second-lead roles as dance hall queens, gun molls, floozies, and exotic villainesses.

She is affectionately remembered by disciples of director Stanley Kubrick for her portrayal of Elisha Cook's cold-blooded, castrating wife in The Killing (1956). Curtailing her screen work in the late '80s, Windsor, who is far more agreeable in person than onscreen, began devoting the greater portion of her time to her sizeable family. Because of her many appearances in Westerns (she was an expert horsewoman), Windsor has become a welcome and highly sought-after presence on the nostalgia convention circuit.

At the beginning of her career in Hollywood, she worked as a stand-in for Bette Davis.

Was a former Miss Utah.

[Stanley Kubrick] "had a part for me in Lolita (1962) as Shelley Winters' best friend, but there was a problem in England with the EADY plan, and there was no way that they could squeeze me in. I haven't seen him in a long time, but we exchange Valentine's cards. I feel people have more time to think about it if they get a Valentine. Christmas is too crazy with other things."

"I'm 5'9" and there were two stars in my life who didn't mind that I was taller than they--George Raft and John Garfield. Raft told me how to walk with him in a scene: We'd start off in a long shot normal, and about the time we got together in a close-up, I'd be bending my knees so I'd be shorter. I had to do a tango with Raft and I learned to dance in ballet shoes with my knees bent."
Explore the simpler time of yesteryear...
A time when men and women were truly glamorous. A time when you could watch any movie with your children and not have to worry about gratuitous sex or violence – yet enjoy all the lustful inferences and edge-of-your-seat suspense.
Welcome to The Timeless Theater!
We're in the process of identifying which of our films are in the Public Domain, and offering these for sale on DVD.
​Please stay Tuned...!
Check out our new Film Noir Collection:
Coffee Mugs!
Phone Cases!
iPad Cases!
More coming soon!