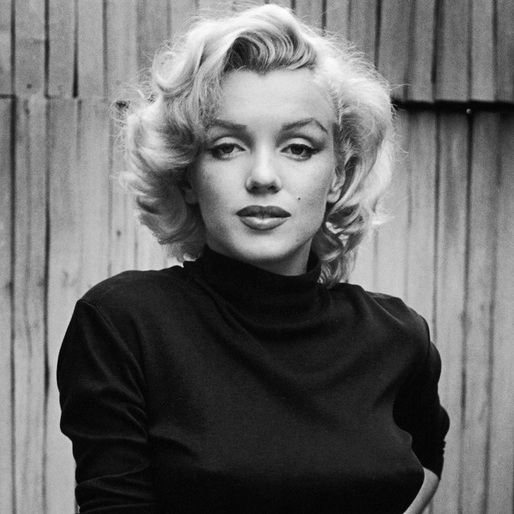 Marilyn Monroe was born Norma Jeane Mortenson. A frequently overlooked detail is that although born June 1, 1926, she was not born in Los Angeles, California but actually in Lemmon, South Dakota. Her mother was an alcoholic and in a custody battle over Norma Jean with her father when she was about 4-5 years old. The mother won and moved from South Dakota later becoming a film-cutter at RKO Studios. Who was widowed and mentally ill, and bandoned her to a sequence of foster homes.

She was almost smothered to death at two, nearly raped at six. At nine, the LA Orphans' Home paid her a nickel a month for kitchen work while taking back a penny every Sunday for church. At sixteen, she worked in an aircraft plant and married a man she called Daddy; he went into the military, she modeled, they divorced in 1946. She owned 200 books (including Tolstoy, Whitman, Milton), listened to Beethoven records, studied acting at the Actors' lab in Hollywood, and took literature courses at UCLA downtown.

20th Century Fox gave her a contract but let it lapse a year later. In 1948, Columbia gave her a six-month contract, turned her over to coach Natasha Lytess and featured her in the B movie Ladies of the Chorus (1948) in which she sang three numbers : "Every Baby Needs a Da Da Daddy", "Anyone Can Tell I Love You" and "The Ladies of the Chorus" with Adele Jergens (dubbed by Virginia Rees) and others. Joseph L. Mankiewicz saw her in a small part in The Asphalt Jungle (1950) and put her in All About Eve (1950), resulting in 20th Century re-signing her to a seven-year contract. Niagara (1953) and Gentlemen Prefer Blondes (1953) launched her as a sex symbol superstar.

When she went to a supper honoring her in the The Seven Year Itch (1955), she arrived in a red chiffon gown borrowed from the studio (she had never owned a gown). That same year, she married and divorced baseball great Joe DiMaggio (their wedding night was spent in Paso Robles, California). After The Seven Year Itch (1955), she wanted serious acting to replace the sexpot image and went to New York's Actors Studio. She worked with director Lee Strasberg and also underwent psychoanalysis to learn more about herself.

Critics praised her transformation in Bus Stop (1956) and the press was stunned by her marriage to playwright Arthur Miller. True to form, she had no veil to match her beige wedding dress so she dyed one in coffee; he wore one of the two suits he owned. They went to England that fall where she made The Prince and the Showgirl (1957) with Laurence Olivier, fighting with him and falling further prey to alcohol and pills. Two miscarriages and gynecological surgery followed. So did an affair with Yves Montand. Work on her last picture The Misfits (1961), written for her by departing husband Miller was interrupted by exhaustion. She was dropped from the unfinished Something's Got to Give (1962) due to chronic lateness and drug dependency.

On August 4, 1962, Marilyn Monroe's day began with threatening phone calls. Dr. Ralph Greenson, Marilyn's physician, came over the following day and quoted later in a document "felt it was possible that Marilyn Monroe had felt rejected by some of the people she had been close to". Apart from being upset that her publicist slept too long, she seemed fine. Pat Newcombe, who had stayed the previous night at Marilyn's house, left in the early evening as did Greenson who had a dinner date. Marilyn was upset he couldn't stay, and around 7:30pm she telephoned him while she was to tell him that her second husband's son had called him. Peter Lawford also called Marilyn, inviting her to dinner, but she declined. Lawford later said her speech was slurred.

As the dark and depressing evening for Marilyn wore on there were other phone calls, including one from Jose Belanos, who said he thought she sounded fine. According to the funeral directors, Marilyn died sometime between 9:30pm and 11:30pm. Her maid unable to raise her but seeing a light under her locked door, called the police shortly after midnight. She also phoned Ralph Greenson who, on arrival, could not break down the bedroom door. He eventually broke in through French windows and found Marilyn dead in bed. The coroner stated she had died from acute barbiturate poisoning, and it was a 'probable suicide'.

Trivia:
Was roommates with Shelley Winters when they were both starting out in Hollywood.

When she died in 1962 at age 36, she left an estate valued at $1.6 million. In her will, Monroe bequeathed 75% of that estate to Lee Strasberg, her acting coach, and 25% to Dr. Marianne Kris, her psychoanalyst. A trust fund provided her mother, Gladys Baker Eley, with $5,000 a year. When Dr. Kris died in 1980, she passed her 25% on to the Anna Freud Centre, a children's psychiatric institute in London. Since Strasberg's death in 1982, his 75% has been administered by his widow, Anna, and her lawyer, Irving Seidman.

Started using the name Marilyn Monroe in 1946, but did not legally change it until 1956.

Appeared on the first cover of Playboy in 1953.

During the filming of Niagara (1953), she was still under contract as a stock actor, thus, she received less salary than her make-up man. This was also the only film in which her character died. The film was reworked to highlight her after Anne Bancroft withdrew.

Often carried around the book, "The Biography of Abraham Lincoln."

Her behavior on the unfinished Something's Got to Give (1962) dimmed her reputation in the industry, but she was still big box office at the time of her death. What a Way to Go! (1964) and The Stripper (1963) were being developed for her.

When she was told that she was not the star in Gentlemen Prefer Blondes (1953) she verbally said "Well whatever I am, I'm still the blonde."

The dress Marilyn Monroe wore to serenade John F. Kennedy, on May 19, 1962 at his birthday celebration was so tight, that it had to be sewn onto her. She had to sit still for approximately an hour.

When budding actresses Shelley Winters and Marilyn were roommates in the late 1940s in Hollywood, Shelley said that one day she had to step out and asked Marilyn to "wash the lettuce" for a salad they were to share for dinner. When Shelley got back to the apartment, (Marilyn was apparently new to the art of cooking) had the leaves of lettuce in a small tub of soapy water and was scrubbing them clean. She had not heard of the phrase before either, or did not know it's true meaning.

Was originally set to play Holly Golightly in Breakfast at Tiffany's (1961), but Audrey Hepburn played the role instead.

Monroe was a stutterer, a little known fact that was easily covered thanks to studio vocal coaches who provided her with diction lessons.

After working with Monroe in As Young as You Feel (1951) jealous co-star Constance Bennett wisecracked, "Now there's a broad with a future behind her!".

"The trouble with censors is they worry if a girl has cleavage. They ought to worry if she hasn't any."

[about Montgomery Clift] "He's the only person I know that is in worse shape than I am."

[on Frank Sinatra] "He is a man at the top of his profession and is a fine actor as well. You know, he got an Oscar for From Here to Eternity (1953). He has helped more people anonymously than anybody else. And the miserable press smears him with lies about his being involved with the Mafia and gangsters. And Frank just takes it."

[on Mae West] "A nice lady even though she turned down making a picture with me. That just shows how smart she is."

[on shooting the famous scene in The Seven Year Itch (1955) where wind from the subway beneath blows her skirt up] "At first it was all innocent and fun, but when Billy Wilder kept shooting the scene over and over the crowd of men kept on applauding and shouting, 'More, more Marilyn - let's see more.' What was supposed to be a fun scene turned into a sex scene."

"Imperfection is beauty, madness is genius, it's better to be absolutely ridiculous than absolutely boring."

"To everyone who thinks they're ugly because they're not a size 0, you're the beautiful one and it's society that's ugly."
Explore the simpler time of yesteryear...
A time when men and women were truly glamorous. A time when you could watch any movie with your children and not have to worry about gratuitous sex or violence – yet enjoy all the lustful inferences and edge-of-your-seat suspense.
Welcome to The Timeless Theater!
We're in the process of identifying which of our films are in the Public Domain, and offering these for sale on DVD.
​Please stay Tuned...!
Check out our new Film Noir Collection:
Coffee Mugs!
Phone Cases!
iPad Cases!
More coming soon!