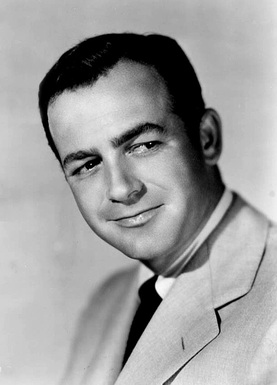 Mark Stevens, a second-tier star during the 1940s and 1950s, was born Richard William Stevens in Cleveland, OH, in 1916 (the dates in reference books vary between 1915-20). Of Scottish and English heritage, the freckle-faced boy with the reddish hair had a father who was an American flyer. His parents divorced while he was young and Mark was sent to England. He resided briefly with his maternal grandparents until a second move to Canada, where he was raised by his older sister. Slight in stature, Mark built himself up through athletics. A back injury, however, kept him from serving in WWII.

His initial interest appeared to be art, which he studied for a time, but a gift for singing led to nightclub work. He began turning to acting as well and performed in musicals and legit plays throughout the various Canadian provinces. Radio broadcasting turned into another creative outlet for Mark. He eventually returned to his Ohio hometown in the early 1940s and won lead roles at the Cleveland Playhouse. Notice here on the stage eventually had him setting his sights on Hollywood. Being young and talented--combined with a 4-F classification--helped gain him a studio contract, first at Warner Brothers where he was groomed in bit roles and briefly billed as Stephen Richards.

That name was quickly changed by Darryl F. Zanuck to Mark Stevens after Mark's move to 20th Century-Fox. The studio darkened his hair and covered up the freckles to enhance his serious good looks. He soon materialized into a prime film noir contender with such films as Within These Walls (1945) and the excellent The Dark Corner (1946) (interestingly starring but fourth-billed!), the latter pairing him up with a cast-against-type Lucille Ball several years before her I Love Lucy (1951) fame. One of his best roles, however, was as an FBI man at odds with Richard Widmark in The Street with No Name (1948). On the musical front, Mark appeared rather colorlessly in such tunefests as I Wonder Who's Kissing Her Now (1947) and Oh, You Beautiful Doll (1949), in which he seemed overshadowed by his leading ladies. Indeed, despite his good looks and abilities, Stevens was constantly (and unfairly) pigeonholed as a lesser version of John Payne or Alan Ladd. In retrospect, many of his capable performances leave viewers thinking he was a producer's casting Plan B.

TV played a big part in his career in the 1950s, with two classic dramatic series coming his way. A move into producing with Mark Stevens Television, Inc. and music publishing with Mark Stevens Music, Inc. prodded him to consider retiring from acting, although he occasionally did guest spots on such TV dramas as Wagon Train (1957) and Playhouse 90 (1956), occasionally directing as well. A jack of all trades, he moved to Europe in the late 1950s and spent a decade operating a restaurant in Spain while writing novels ("This, Then My Mind"; "Run Fast, Run Far"; "The Ex-Patriots").

He was married for some time to Annelle Hayes and had two children, Mark Richard and Arrelle. His rather nomadic existence eventually led to him not only filing for bankruptcy but headed for divorce in 1962. Mark remained content in Europe, however, for most of his later life, but he did work in Hollywood and owned and maintained apartment buildings as well. He married a second time to a Swedish woman named Hilde. He died of cancer in Majores, Spain, at 77 well-lived years old.

Trivia:
An instinctive rebellious nature had him kicked out of every school he ever attended, public or private.

Once prepared for training for the Canadian Olympic Diving Team but seriously hurt his back on the high springboard. This injury later kept him out of the Army and resulted in an operation.

Became a contract player for Warners at $100 a week in 1943 but they changed his looks and his stage name. They darkened and straightened his curly ginger-colored hair and covered his freckles. At first he was billed as Stephen Richards, later changed it to Mark Stevens at the suggestion of Darryl F. Zanuck when he switched to 20th Century-Fox.
Explore the simpler time of yesteryear...
A time when men and women were truly glamorous. A time when you could watch any movie with your children and not have to worry about gratuitous sex or violence – yet enjoy all the lustful inferences and edge-of-your-seat suspense.
Welcome to The Timeless Theater!
We're in the process of identifying which of our films are in the Public Domain, and offering these for sale on DVD.
​Please stay Tuned...!
Check out our new Film Noir Collection:
Coffee Mugs!
Phone Cases!
iPad Cases!
More coming soon!