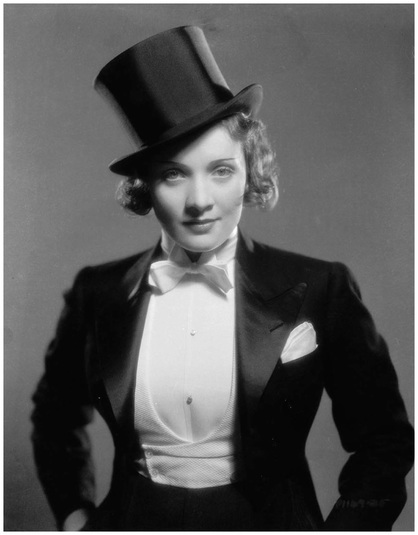 Marie Magdelene Dietrich von Losch (aka Marlene) was born in Berlin, Germany on December 27, 1901. Her father was an army officer who had served in the Franco-Prussian War. Because of his constant absences from the family due to his army duties, Marlene and the rest had to rely on themselves. When he died, while she was 11, Marlene's mother married Eduard von Losch and he adopted the Dietrich children.

Marlene enjoyed music and attended concerts. She was adept at playing the violin and piano. By the time she was in her mid-teens, Marlene had discovered the stage. Acting was to be her vocation. In 1921, Marlene applied for an acting school run by Max Reinhardt. She was accepted. She appeared in several stage production, but never had more than a couple of spoken lines. In short, she wasn't setting the stage world on fire. She attempted films for the first time in 1922 Her first film was The Little Napoleon (1923) which was followed by Love Tragedy (1923).

On this last project, she met Rudolf Sieber and married him in 1924. The union lasted until his death in 1976 although they didn't live together that whole time. The remainder of her early film career was generally filled with bit roles that never amounted to a whole lot. After being seen in the German production of The Blue Angel (1930) in 1930, Marlene was given a crack at Hollywood. Her first US film was Morocco (1930) with Gary Cooper later that year followed, by Dishonored (1931) in 1931. This latter movie had her cast as a street walker who is appointed a spy. The film was a rather boring affair but was a success because of Marlene's presence.

Movie goers were simply attracted to her. In 1932, Marlene filmed Shanghai Express (1932) which proved to be immensely popular raking in $3 million. Once again, she was cast as a prostitute. The next film was Blonde Venus (1932) which turned out to be a horrible production. Her co-star was Cary Grant and once again she was cast as a prostitute. Marlene seemed to be typecast as a woman of low morals and she wanted different parts. Some films such as Desire (1936) in 1936 didn't do that but she wanted to expand. Her chance came in 1939 in Destry Rides Again (1939) when she was cast as "Frenchy", a Western saloon hostess. This began a new direction for Marlene since it shed the typecasting which she was forced to endure during her career.

All through the 1940s, she appeared in well-produced, well-directed films such as Manpower (1942), The Spoilers (1942), The Lady Is Willing (1942) and Pittsburgh (1942) all in 1942. Afterwards the roles came fewer, perhaps one to two films every year. In 1945, Marlene didn't appear in any. She only made seven productions in the 1950's. Her last role of any substance was Judgment at Nuremberg (1961) in 1961.
Despite the lack of theatrical roles, Marlene still made appearances on the stage. However, by 1979, she was a shell of her former self. After breaking her leg in one performance, she never made a go of it in show business again. Spending the last 12 years of her life bed-ridden, Marlene died on May 6, 1992 in Paris, France of natural causes at the age of 90.

Trivia:
Received the U.S. War Department's 'Medal of Freedom', in 1947, for entertaining American troops in WWII and her strong stand against Naziism.

She sucked lemon wedges between takes to keep her mouth muscles tight.

Never worked without a mirror on the set so she could constantly check her makeup and hair.

Her make-up man said she kissed so hard that she needed a new coat of lipstick after every kiss.

She thought of feet to be the ugliest part of the human body, and therefore always tried to hide them in one way or another.

The only show-business friend she ever had was Mae West. However, they never saw one another outside the Paramount lot.

According to daughter Maria Riva, Dietrich had a long-standing dislike of actress Loretta Young.

Was considered for the role of Margo Channing in All About Eve (1950) after Claudette Colbert was forced to pull out of the project due to back injury. However the part was given to Bette Davis, who went on to receive a Best Actress Oscar nomination for her performance.

Campaigned for the role of Mama Hanson in I Remember Mama (1948) but Irene Dunne, who went on to receive a Best Actress Oscar nomination for her performance, was cast instead.

She turned down the role of Charlie in Station West (1948). The part went to Jane Greer.

Became pregnant in 1938 as a result of an affair with James Stewart during the filming of Destry Rides Again (1939) but she underwent an abortion. Stewart did not even know she was pregnant.

"I never enjoyed working in a film."

[in 1964] "I had no desire to be a film actress, to always play somebody else, to be beautiful with somebody constantly straightening out your every eyelash. It was always a big bother to me."

"Careful grooming may take twenty years off a woman's age, but you can't fool a flight of stairs."

"Gary Cooper was neither intelligent nor cultured. Just like the other actors, he was chosen for his physique, which, after all, was more important than an active brain."

"The legs aren't so beautiful. I just know what to do with them."

"The diaphragm is the greatest invention since Pan-Cake makeup."

"Once a woman has forgiven a man, she must not reheat his sins for breakfast."

[on Rock Hudson] "He was one of the gentlest, kindest men in Hollywood--and all those journalists should burn in Hell for the bile they printed about him when he died."

[when Paramount bought the rights to the book, 'Mommie Dearest'] "I am shocked that Paramount bought that filthy book and made the frightful bitch who wrote it rich, and that rhymes. I did not know Joan Crawford but nobody deserves that kind of slaughter. Too bad she did not leave her where she found her, so she could now spit her poison in the slums of some big city. I hate her with a passion and I know the public will."

[on Orson Welles] "When I talk with him, I feel like a tree that has been watered."

[on her preference for trousers] "They are so comfortable. It takes too much time to be a well-dressed woman. I have watched others. Bags, shoes, hats. They must think of them all the time. I cannot waste that time."

"Ernest Hemingway is the most positive life force I have ever encountered. I hate anything negative, and I hate waste. In Hemingway, nothing is wasted."

[after returning to West Germany in 1960] "The Germans and I no longer speak the same language."

[during the war] [Adolf Hitler] "is an idiot."
Explore the simpler time of yesteryear...
A time when men and women were truly glamorous. A time when you could watch any movie with your children and not have to worry about gratuitous sex or violence – yet enjoy all the lustful inferences and edge-of-your-seat suspense.
Welcome to The Timeless Theater!
We're in the process of identifying which of our films are in the Public Domain, and offering these for sale on DVD.
​Please stay Tuned...!
Check out our new Film Noir Collection:
Coffee Mugs!
Phone Cases!
iPad Cases!
More coming soon!