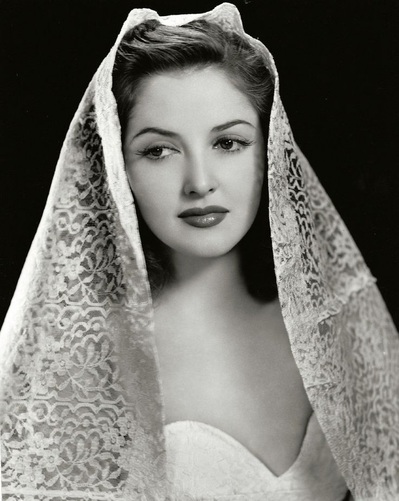 Lovely, auburn-haired Martha Vickers (nee Martha MacVicar) was born in Ann Arbor, Michigan, on May 28, 1925, the daughter of James S. and Frances MacVicar. After attending schools in various states - Florida, Texas and California - she and her family settled on the West Coast. A raving beauty, she broke into the entertainment field as a model for still photographer William Mortenson. This attracted the interest of David O. Selznick and she signed a starlet contract with him, but nothing came of it. Universal took over her contract where she was groomed in inauspicious bit parts such as her corpse/victim in Frankenstein Meets the Wolf Man (1943), and in such low-level entries as Captive Wild Woman (1943) and The Mummy's Ghost (1944). In between assignments, Martha earned WWII pin-up exposure in such magazines as "Yank: The Army Weekly."

RKO gave her some higher-level billing chances with Marine Raiders (1944) and The Falcon in Mexico (1944), but it was Warner Bros. that put her officially on the map. The enticing Martha earned celebrity status and a new stage moniker when she generated some real heat as Lauren Bacall's wild, thumb-sucking sister Carmen in the film noir classic The Big Sleep (1946), which also starred Humphrey Bogart, playing the teenage nymphet "bad girl" for all it was worth. This major success quickly led to other "B" roles and not necessarily all "bad girl" parts. Highly appealing as the second femme lead in the pleasant musical The Time, the Place and the Girl (1946), Martha looked radiant but was overlooked for bigger things. She continued on and disrupted the proceedings again in the atmospheric film noir The Man I Love (1947) with Ida Lupino and finally earned leading lady status in That Way with Women (1947) opposite Dane Clark.

Very much a part of the Hollywood dating scene, which included actor James Stewart and director Frederick De Cordova, Martha finally married producer A.C. Lyles in March of 1948, but the marriage was over within a couple of months. Post-war films included Love and Learn (1947), another film noir piece Ruthless (1948), and the melodrama Bad Boy (1949), which was Audie Murphy's first starring role. She ended the decade top-lining the "Poverty-Row" drama Alimony (1949). Surprisingly, Martha's high-profiled second marriage in 1949 to film star Mickey Rooney (she was his third wife) did not advance her career. In fact, Martha was not seen in films at all during this period. Despite the couple having a son, Teddy Rooney, the next year (1950), Rooney had already hit the nadir of his career and had turned excessively to the bottle. Her marriage to Rooney would be short-lived as well.

Martha married a third time in 1954 to Chilean polo player-turned-actor Manuel Rojas, best known for his co-starring role in The Magnificent Matador (1955), and she finally returned to the screen in The Big Bluff (1955) co-starring with John Bromfield. The momentum, however, was gone and the movie did nothing to generate new interest. She did move, however, into TV and performed effectively in a number of dramatic showcases. She and Rojas had two children, Tina and Tessa. In 1960, Martha did her last filming with the western Four Fast Guns (1960) and after guesting on a couple of episodes of the TV series "The Rebel," ended her career. Not much was heard from this sultry beauty until her death from cancer in 1971 at age 46 in Hollywood, California.

Trivia:
Performed under her real name through 1944.

Enjoyed bowling on the side and taught daughter Tessa. Both daughters live in the Southern California area.

Has two grandchildren by her daughter Tessa: Merek and Lucas Johnson.
Explore the simpler time of yesteryear...
A time when men and women were truly glamorous. A time when you could watch any movie with your children and not have to worry about gratuitous sex or violence – yet enjoy all the lustful inferences and edge-of-your-seat suspense.
Welcome to The Timeless Theater!
We're in the process of identifying which of our films are in the Public Domain, and offering these for sale on DVD.
​Please stay Tuned...!
Check out our new Film Noir Collection:
Coffee Mugs!
Phone Cases!
iPad Cases!
More coming soon!