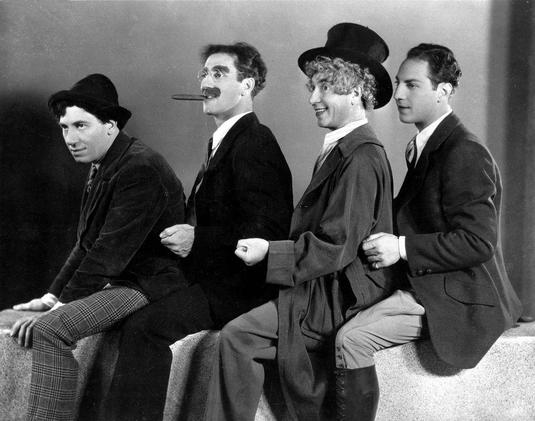 When the four Marx Brothers became an overnight sensation on Broadway in I'll Say She Is in 1924, they had already spent 20 years in show business. Their uncle, character actor Al Shean (of Gallagher and Shean), helped them get started in the business, spurred on by their mother Minnie. The boys toured the vaudeville circuits, first as singers and eventually as comedians, until they slowly improved enough to make it to Broadway. Ultimately, the Marx Brothers revolutionized American comedy with their anarchistic, faster-than-lightning, anything-goes approach.

By the time of their first film, The Cocoanuts, in 1929 -- which was basically a filmed version of their second Broadway hit -- brother Gummo (Milton Marx, 1897-1977) had retired from the act and been replaced by the baby, Zeppo (Herbert Marx, 1901-1979). Ultimately, Zeppo retired from performing as well, leaving the three Marx Brothers best known today: Chico (Leonard Marx, 1886-1961), Harpo (Adolph Arthur Marx, 1888-1964), and the one and only Groucho (Julius Henry Marx, 1890-1977). Each of these three had his own strong screen persona: Chico was the Italian who mangled the English language and played the piano; Harpo never spoke, chased blondes, created general mayhem, and played the harp; Groucho, with his grease paint mustache and tilted walk, was a fast-talking wisecracker often on the dubious side of the law or morality.

The brothers could be just as wild offscreen as they were on, and tended to create chaos wherever they went. Their first five films -- The Cocoanuts; Animal Crackers (1930), based upon their third Broadway hit; Monkey Business (1931); Horse Feathers (1932); and Duck Soup (1933) -- all for Paramount, were particularly anti-social and anti-establishment, which made them well-suited to the mood of the country in the early years of the Depression. By 1935, they were working for Irving Thalberg at MGM (thanks to Chico, who played bridge with the producer and had worked out the deal).
Thalberg insisted on better plot structure and romantic subplots, which made the brothers more popular in their day but, in retrospect, detracted from the inspired anarchy of their earlier comedies. After the first two MGM films, A Night at the Opera (1935) and A Day at the Races (1937), Thalberg died, and the quality of their films began a descent from which they never recovered, culminating in the mostly pathetic Love Happy (1949). The Marx Brothers themselves flourished, however. Even Gummo and Zeppo, who had quit performing years earlier, developed financially successful, albeit tangential, careers in show business. Chico formed his own band in 1942, which included a very young Mel Torme. Harpo made numerous comedy/concert tours, including an early trip to Russia.

Numerous books have been written about the Marx Brothers' often turbulent personal lives and their zany comedies. Their influence has been so widespread that many Marx Brothers routines -- particularly Groucho's -- have slipped into the American vernacular ("I shot an elephant in my pajamas. How he got into my pajamas, I'll never know"). The character of Hawkeye Pierce on M*A*S*H was strongly influenced by Grouchos screen persona, and the role of Banjo in George S. Kaufman's The Man Who Came to Dinner (1941) was based on Harpo.

Trivia:
In alphabetical order, they were Chico Marx, Groucho Marx, Gummo Marx, Harpo Marx, and Zeppo Marx. Gummo appeared in their vaudeville act, but not in any Marx Brothers films.

[Groucho] When talking about Margaret Dumont, the actress who frequently played the dowager who acted as a punching bag for Groucho's verbal insults, he claimed the secret to their chemistry is that she never understood what he was saying.

[Groucho] Shortly after his death, his children found a gag letter written by Groucho that stated that he wanted to be buried on top of Marilyn Monroe.

[Harpo] When he taught himself to play the harp, he later learned that he played it the wrong way. However, when he became famous and wealthy, he on occasion throughout his career, took harp lessons from various harpists and music teachers in both New York City and Los Angeles to better increase his skill. However, due to his natural born talent, many musicians and music teachers ended up approaching him to learn his method of harp playing.

[Harpo] Harpo first using the gag of chasing a screaming girl as a quick prank to throw his brother Groucho Marx's timing off on stage. Groucho wasn't fazed, but Harpo got in trouble when he found out the hard way that the girl had a violent mobster for a boyfriend. He quickly made peace with the man and incorporated the girl chasing for the rest of his career.

[Harpo] At the beginning of the film Monkey Business (1931), The Marx Brothers, playing ship's stowaways concealed in barrels, are first introduced harmonizing unseen, singing the popular song "Sweet Adeline." And although he is cannot be seen, this musical performance marks the only time during one of The Marx Brothers' movie that Harpo's voice -- a clear and pleasant baritone -- is ever heard.

[Chico] Was an avid poker player and is rumored to have had a photographic memory so good, he could memorize the positions of cards in a deck. When a check written by Chico was found in mobster Bugsy Siegel's wallet at the time of his death, Chico was interrogated by police. He insisted the check was payment of a gambling debt from a poker game. When asked about his knowledge of Siegel's criminal activities, Chico stated, "We never discussed business." Groucho Marx later said of this incident, "Chico was lucky that Bugsy was shot. If Bugsy had tried to cash that check, it would have bounced. Then Bugsy would have shot Chico."

[Chico] The oldest of The Marx Brothers, he was a gambling addict and initially joined his brothers' act to pay off debts. However, he became the unofficial manager of the group once he joined (taking over from his mother), using the hustling charms he attained as a gambler to further The Marx Brothers' fortunes.

[Chico] Allegedly, during the opening night party for their Broadway run of 'The Cocoanuts', Groucho informed Chico that Tallulah Bankhead had just walked into the room and wanted to meet him. Chico strode up to Bankhead and introduced himself with, "Miss Bankhead, I would like to fuck you". Bankhead laughed and replied "So you shall darling, so you shall". The story has since become a part of show business lore.
Explore the simpler time of yesteryear...
A time when men and women were truly glamorous. A time when you could watch any movie with your children and not have to worry about gratuitous sex or violence – yet enjoy all the lustful inferences and edge-of-your-seat suspense.
Welcome to The Timeless Theater!
We're in the process of identifying which of our films are in the Public Domain, and offering these for sale on DVD.
​Please stay Tuned...!
Check out our new Film Noir Collection:
Coffee Mugs!
Phone Cases!
iPad Cases!
More coming soon!