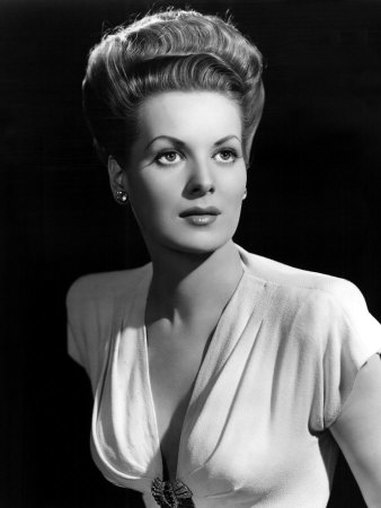 Born in Ranelagh, Ireland, near Dublin, Maureen O'Hara was trained at the Abbey Theatre School and appeared on radio as a young girl before making her stage debut with the Abbey Players in the mid-'30s. She went to London in 1938, and made her first important screen appearance that same year in the Charles Laughton/Erich Pommer-produced drama Jamaica Inn, directed by Alfred Hitchcock. She was brought to Hollywood with Laughton's help and co-starred with him in the celebrated costume drama The Hunchback of Notre Dame, which established O'Hara as a major new leading lady.

Although she appeared in dramas such as How Green Was My Valley with Walter Pidgeon, The Fallen Sparrow opposite John Garfield, and This Land Is Mine with Laughton, it was in Hollywood's swashbucklers that O'Hara became most popular and familiar. Beginning with The Black Swan opposite Tyrone Power in 1942, she always seemed to be fighting (or romancing) pirates, especially once Technicolor became standard for such films. Her red hair photographed exceptionally well, and, with her extraordinary good looks, she exuded a robust sexuality that made her one of the most popular actresses of the late '40s and early '50s.

O'Hara was also a good sport, willing to play scenes that demanded a lot of her physically, which directors and producers appreciated. The Spanish Main, Sinbad the Sailor, and Against All Flags (the latter starring Errol Flynn) were among her most popular action films of the '40s. During this period, the actress also starred as young Natalie Wood's beautiful, strong-willed mother in the classic holiday fantasy Miracle on 34th Street and as John Wayne's estranged wife in the John Ford cavalry drama Rio Grande. O'Hara became Wayne's most popular leading lady, most notably in Ford's The Quiet Man, but her career was interrupted during the late '50s when she sued the scandal magazine Confidential.

It picked up again in 1960, when she did one of her occasional offbeat projects, the satire Our Man in Havana, based on a Graham Greene novel and starring Alec Guinness. O'Hara moved into more distinctly maternal roles during the '60s, playing the mother of Hayley Mills in Disney's popular The Parent Trap. She also starred with Wayne in the comedy Western McLintock!, and with James Stewart in the The Rare Breed, both directed by Andrew V. McLaglen. Following her last film with Wayne, Big Jake, and a 1973 television adaptation of John Steinbeck's The Red Pony, O'Hara went into retirement, although returned to the screen in 1991 to play John Candy's overbearing mother in the comedy Only the Lonely, and later appeared in a handful of TV movies. In 2014, she received an Honorary Academy Award, despite having never been nominated for one previously. O'Hara died the following year, at age 95.

Trivia:
Performed many of her own stunts in her films, rare for an actress at that time.

Brought to Hollywoood by legendary actor, director, producer Charles Laughton, who originally signed her to a personal services performing contract, meaning she was signed to Laughton, instead of to a studio, as was common at that time.

She was having lunch with actress Lucille Ball the moment Lucy first saw Cuban musician Desi Arnaz, whom she later married.

She and John Wayne remained friends until his death. In her home on St. Croix, she had a wing she called the John Wayne Wing because he stayed there when visiting. It was badly damaged by Hurricane Hugo in 1989, some ten years after Wayne's death.

Was John Wayne's favorite actress and he considered her a real friend, the only woman he thought of in that way. When he lay dying in his hospital bed, he watched on television as Maureen petitioned Congress to give him a Congressional Gold Medal, which they did by a unanimous vote.

She was the second actress, after Myrna Loy (in 1991), to receive an honorary Academy Award without ever having been nominated previously.

"Speaking as an actress, I wish all actors would be more like Duke [John Wayne]--and speaking as a person, it would be nice if all people could be honest and as genuine as he is. This is a real man."

"Charles Laughton and his wife, Elsa Lanchester, were never blessed with children. Years after he died, Elsa wrote her autobiography and claimed they never had children because Laughton was homosexual. That's rubbish. Whether or nor Laughton was gay would never have stopped him from having children. He wanted them too badly. Laughton told me the reason they never had children was because Elsa couldn't conceive, the result of a botched abortion she'd had during her earlier days in burlesque. Laughton told me many times that not being a father was his greatest disappointment in life."

[on John Garfield]: "He was my shortest leading man, an outspoken Communist and a real sweetheart."

"I made John Wayne sexy. I take credit for that."

[on Sam Peckinpah, who directed her in The Deadly Companions (1961)] "I didn't enjoy Sam at all. I have to be honest. I didn't think he was a very good director. I think he was lucky that whatever happened in his career happened. I think it was luck, not talent. I'm sorry. You have to forgive me. He was not a good director and if his films turned out successful, that was luck... and people protecting him, like the cameramen and the producers. Different people protecting him made him look good."

[on some of the leading men she worked with] "I enjoyed James Stewart, I enjoyed Brian Keith and I enjoyed Henry Fonda. Jeff Chandler was a nice man but a bad actor."
Explore the simpler time of yesteryear...
A time when men and women were truly glamorous. A time when you could watch any movie with your children and not have to worry about gratuitous sex or violence – yet enjoy all the lustful inferences and edge-of-your-seat suspense.
Welcome to The Timeless Theater!
We're in the process of identifying which of our films are in the Public Domain, and offering these for sale on DVD.
​Please stay Tuned...!
Check out our new Film Noir Collection:
Coffee Mugs!
Phone Cases!
iPad Cases!
More coming soon!