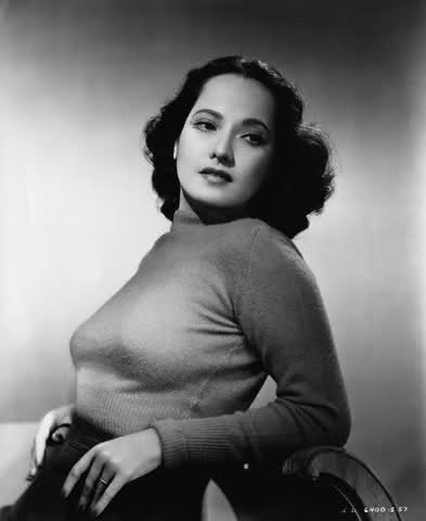 Estelle Merle O'Brien Thompson was born in India on February 19, 1911. She was educated in that country until the age of 17, when she left for London. Merle began her career in British films with mostly forgettable roles or bit parts. She appeared in an uncredited role in Alf's Button (1930), a pattern that would unfortunately repeat itself regularly over the next three years. However, movie moguls eventually saw an an untapped talent in their midst and began grooming Merle for something bigger.

Finally she landed a part with substance: the role of Ysobel d'Aunay in Men of Tomorrow (1932). That was quickly followed by The Private Life of Henry VIII. (1933). After her portrayal of Lady Marguerite Blakeney in The Scarlet Pimpernel (1934), Hollywood beckoned and she left to try her hand in US films. American movie executives already had some idea of her talent because her film Vagabond Violinist (1934) (US title: Vagabond Violinst) was a success in that country. With her nomination for an Academy Award for Best Actress as Kitty Vane in The Dark Angel (1935), Merle became a star in both Britain and the US.

Her work in that film resulted in offers for more quality pictures, and she appeared in several well received films, such as These Three (1936), Over the Moon (1939) and The Divorce of Lady X (1938). Her most critically acclaimed performance--hailed by some critics as "masterful"--was as Cathy Linton in Wuthering Heights (1939). The 1940s proved to be a very busy decade for her, as she appeared in no less than 15 films. After her role in Berlin Express (1948) she would not be seen on the screen again until four years later, as Elizabeth Rockwell in Pardon My French (1951).

She was off the screen again for more than a year, returning in Désirée (1954). Unfortunately, she began appearing in fewer and fewer films over the ensuing years. There were no films for her in 1955, only one in 1956 and then none until Of Love and Desire (1963). In between she did appear on television as host of the TV series Assignment Foreign Legion (1956). Her final film was Interval (1973). After her career finally ended she lived in quiet retirement until her death of a massive stroke on November 23, 1979, in Malibu, California. She was 68 and had kept her beauty to the end.

Trivia:
Was known as "Queenie Thompson" up until 1933 when future husband Alexander Korda changed her name for her role in The Private Life of Henry VIII. (1933).

Lost the role of Domini Enfilden in The Garden of Allah (1936) to Marlene Dietrich.

To hide her half-Indian parentage, she would tell friends and acquaintances that the older woman who lived in her house was her maid; the woman was actually her mother.

[on Ernst Lubitsch in That Uncertain Feeling (1941)] "That was probably the happiest picture I ever made because Lubitsch was such a funny man, such a darling man. He played the piano between every take, and there would be laughs. Then I always ask him to do the scene for me before I did it only to have a laugh."
Explore the simpler time of yesteryear...
A time when men and women were truly glamorous. A time when you could watch any movie with your children and not have to worry about gratuitous sex or violence – yet enjoy all the lustful inferences and edge-of-your-seat suspense.
Welcome to The Timeless Theater!
We're in the process of identifying which of our films are in the Public Domain, and offering these for sale on DVD.
​Please stay Tuned...!
Check out our new Film Noir Collection:
Coffee Mugs!
Phone Cases!
iPad Cases!
More coming soon!