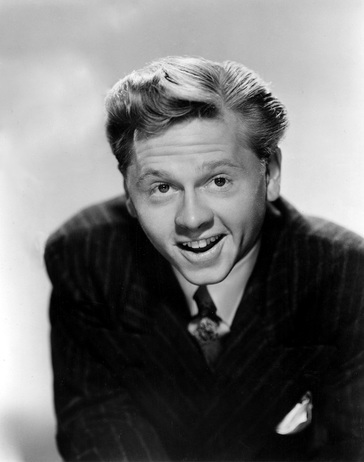 A versatile American screen actor and former juvenile star who made up in energy what he lacked in height, Mickey Rooney was born Joe Yule Jr. on September 23, 1920, in Brooklyn, NY. The son of vaudevillians, Rooney first became a part of the family act when he was 15-months-old, and was eventually on-stage singing, dancing, mimicking, and telling jokes. He debuted onscreen at the age of six in the silent short Not to Be Trusted (1926), playing a cigar-smoking midget. His next film was the feature-length Orchids and Ermine (1927). Over the next six years, he starred in more than 50 two-reel comedies as Mickey McGuire (a name he legally adopted), a series based upon a popular comic strip, "Toonerville Folks." In 1932, he changed his name to "Mickey" Rooney when he began to appear in small roles in feature films. He was signed by MGM in 1934 and gave one of the most memorable juvenile performances in film history as Puck in A Midsummer Night's Dream (1935).

A turning point in Rooney's career came with his 1937 appearance as Andy Hardy, the wise-cracking son of a small-town judge, in the B-movie A Family Affair. The film proved to be such a success that it led to a string of 15 more Andy Hardy pictures over the next twenty years. The films were sentimental light comedies that celebrated small-town domestic contentment and simple pleasures, and the character became the one with which the actor became most identified. Rooney went on to a memorable role in Boys Town (1938) and several high-energy musicals with Judy Garland. Added to his Andy Hardy work, these performances caused his popularity to skyrocket, and, by 1939, he was America's biggest box-office attraction.

Rooney was awarded a special Oscar (along with Deanna Durbin) in 1939 for his "significant contribution in bringing to the screen the spirit and personification of youth, and, as a juvenile player, setting a high standard of ability and achievement." His popularity peaked in the early '40s with his appearances in such films as The Human Comedy (1943) and National Velvet (1944), the latter with a young Elizabeth Taylor. After his World War II service and subsequent military discharge, however, his drawing power as a star decreased dramatically, and was never recovered; suddenly he seemed only acceptable as a juvenile, not a grown man.

In the late '40s Rooney formed his own production company, but it was a financial disaster and he went broke. To pay off his debts, he was obliged to take a number of low-quality roles. By the mid-'50s, though, he had reinvented himself as an adult character actor, starring in a number of good films, including the title role in Baby Face Nelson (1957). Rooney continued to perform in both film, television, stage, and even dinner theater productions over the next four decades, and debuted on Broadway in 1979 with Sugar Babies. Although his screen work was relatively erratic during the '90s, he managed to lend his talents to diverse fare, appearing in both Babe: Pig in the City (1998) and the independent Animals (And the Tollkeeper) (1997). In 2006 Rooney was back on the big screen in the comedy hit A Night at the Museum, with a slew of subsequent roles on low-budget fare preceding an appearance in 2011's The Muppets. That same year, Rooney made headlines when he testified before Congress on the issue of elder abuse, and revealing himself as one of many seniors who had been victimized as a result of their age. Rooney continued working until his death in 2014 at age 93.

During the course of his career, Rooney received two Best Actor and two Best Supporting Actor Oscar nominations, the last of which for his work in 1979's The Black Stallion. He also won a Golden Globe for the 1981 TV movie Bill. In 1983, while undergoing a well-publicized conversion to Christianity, he was awarded a special Lifetime Achievement Oscar "in recognition of his 60 years of versatility in a variety of memorable film performances." Rooney published his autobiography, Life Is Too Short, in 1991. His eight wives included actresses Ava Gardner and Martha Vickers.

Was considered for the role of Archie Bunker on All in the Family (1971).

Liza Minnelli wanted Rooney to do the eulogy at the funeral for her mother, Judy Garland in June of 1969, but decided against it because she felt that Rooney might not be able to get through it, given his and Garland's long and close friendship.

Originally came to Hollywood to audition for "Our Gang" (aka The Little Rascals (1955)), unfortunately Mickey's mother declined over a dispute over salary.

In 1938, he was severely reprimanded by MGM studio head Louis B. Mayer for having a torrid affair with Norma Shearer. The affair was causing quite a commotion on the set of her film Marie Antoinette (1938), where the two would hole up in her trailer. Mickey was 18 at the time. Shearer was 38 and her husband, MGM studio exec Irving Thalberg, had recently died. Mayer managed to keep the story from going public and it was not revealed until many years later, when Rooney gave the explicit details in his autobiography.

"People say, "How can you be married eight times?" But I played the hand dealt me the way I was supposed to. I was friendly with most of my ex-wives. My God, there's a Mickey Rooney's Former Wives Marching Band!"

[on his lifelong friend and frequent co-star, Judy Garland] "Judy turned to drugs because she was in pain and because drugs made her feel good. As one of the MGM kids, she'd been treated for most of her life to magical, instant solutions to everything... She could never accept herself, so she was always on the run."

[on his feud with Ernest Borgnine] "All the Oscars in the world can't buy him dignity, class and talent. I don't know why he is famous and why he is a star. Talk about a lucky jerk."

[In a 1970 David Frost interview] "I have nine kids, seven wives, and the American Bar Association to support. I'm a very quiet person, a fellow who believes in the Ten Commandments, the Golden Rule, and bacon, lettuce, and tomato with a lot of mayonnaise."

[2008, on the controversy surrounding his Breakfast at Tiffany's (1961) role] "Blake Edwards wanted me to do it because he was a comedy director. They hired me to do this overboard, and we had fun doing it... Never in all the more than 40 years after we made it - not one complaint. Every place I've gone in the world people say, 'God, you were so funny.' Asians and Chinese come up to me and say, 'Mickey, you were out of this world.' [Had I known people would get offended] I wouldn't have done it. Those that didn't like it, I forgive them and God bless America, God bless the universe, God bless Japanese, Chinese, Indians, all of them and let's have peace."
Explore the simpler time of yesteryear...
A time when men and women were truly glamorous. A time when you could watch any movie with your children and not have to worry about gratuitous sex or violence – yet enjoy all the lustful inferences and edge-of-your-seat suspense.
Welcome to The Timeless Theater!
We're in the process of identifying which of our films are in the Public Domain, and offering these for sale on DVD.
​Please stay Tuned...!
Check out our new Film Noir Collection:
Coffee Mugs!
Phone Cases!
iPad Cases!
More coming soon!