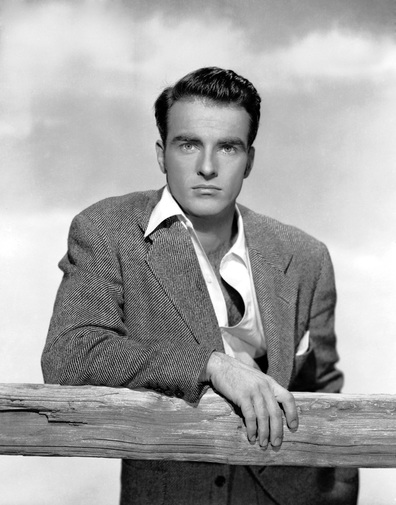 Along with Marlon Brando, Montgomery Clift typified the emergence of a new breed of Hollywood star: Prodigiously talented, intense, and defiantly non-conformist, he refused to play by the usual rules of celebrity, actively shunning the spotlight and working solely according to his own whims and desires. A handsome and gifted actor, he channeled the pain and torment so rampant in his private life into his screen and stage roles, delivering remarkably poignant and sensitive performances which influenced generations of actors to come. Born October 17, 1920, in Omaha, NE, Clift began performing in summer stock at the age of 14 in a production of Fly Away Home. Within seven months, the play was running on Broadway, and throughout the remainder of his teen years he remained a fixture on the New York stage. Next, in 1935, was Cole Porter's Jubilee. In 1940, Clift also appeared with the Lunts in There Shall Be No Night, and in 1942 performed in The Skin of Our Teeth. His work in the Lillian Hellman smash The Searching Wind brought any number of offers from Hollywood, but he rejected them to appear in The Foxhole in the Parlor; finally, after earning acclaim for Tennessee Williams' You Touched Me, Clift agreed to make his film debut in the classic 1948 Howard Hawks Western Red River.

From the outset, Clift refused to play the studio game: He did not sign any long-term contracts and chose to work only on projects which intrigued him, like Red River. However, the film was so long in post-production that screen audiences instead got their first glimpse of him in Fred Zinneman's The Search, where unanimous praise for his sensitive, unsentimental, and Oscar-nominated performance made Clift among the hottest commodities in the business. He agreed to appear in three films for Paramount (only completing two): The first was William Wyler's 1949 adaptation of Henry James' The Heiress, with Billy Wilder's Sunset Boulevard scheduled to follow. At the last minute, Clift backed out of the project, however, to star in 20th Century Fox's 1950 war drama The Big Lift. Upon returning to Paramount, he starred in George Stevens' classic A Place in the Sun, earning a second Academy Award nomination for his performance opposite Elizabeth Taylor, who became his real-life confidante. Clift then disappeared from view for two years, coaxed out of self-imposed exile by Alfred Hitchcock to star in the 1953 thriller I Confess.

For Zinnemann, Clift next starred in the war epic From Here to Eternity; the film was the biggest success of his career, earning him another Best Actor bid (one of the movie's 13 total nominations; it took home eight, including Best Picture). After headlining Vittorio De Sica's Stazione Termini, Clift returned to Broadway to appear in The Seagull; in order to commit to the project, he needed to turn down any number of screen offers, including On the Waterfront and East of Eden. In total, he was away from cinema for four years, not resurfacing prior to the 1957 smash Raintree County; its success re-established him among Hollywood's most popular stars, but offscreen Clift's life was troubled. Tragedy struck when a horrific auto accident left him critically injured. He gradually recovered, but his face was left scarred and partially paralyzed. Still, Clift continued performing, delivering performances informed by even greater depth and pathos than before. His first project in the wake of the accident was 1958's The Young Lions, his first and only collaboration with Marlon Brando.

In 1959, Clift next reunited with Taylor for Suddenly, Last Summer, then starred in Elia Kazan's Wild River. In 1961, he co-starred in The Misfits (the final completed film from another Hollywood tragedy, Marilyn Monroe), then delivered a stunning cameo as a witness in the Stanley Kramer courtroom drama Judgment at Nuremburg. He then starred as Freud for director John Huston. The film was a box-office disaster, suffering a lengthy delay in production when Clift was forced to undergo surgery to remove cataracts from both eyes.

He later sued Universal to recover his $200,000 fee for the project; the studio countersued for close to $700,000, alleging his excessive drinking had doomed the picture's success. The matter was settled out of court, but it crippled Clift's reputation, and because of this, and his increasing health problems, he did not work for another four years until director Raoul Levy offered him the lead in the 1966 thriller Lautlose Waffen. At the insistence of star Elizabeth Taylor, he was then offered a supporting role in Reflections of a Golden Eye, but before filming began, he died of a heart attack at his New York City home on July 23, 1966. He was just 45 years old.

Trivia:
He had so many health problems on the set of Freud (1962) that Universal sued him for the cost of the film's production delays. During the trial, the film opened and was such a huge hit that Clift's lawyers brought up the point that the film was doing well because of Clift's involvement. Clift won a lucrative settlement.

Was Elizabeth Taylor's choice to play her husband, the closeted homosexual Major Weldon Penderton, in Reflections in a Golden Eye (1967). He died before the film began shooting and was replaced by Marlon Brando, who at one time was considered his only rival as an attractive leading man who was also a great actor.

Marlon Brando, who calls him a "friend" in his autobiography, says that Clift was a tormented soul addicted to alcohol and chloral hydrate, a depressant and sedative which he drank. On the set of The Young Lions (1958), he warned Clift that he was destroying himself like Brando's own alcoholic mother had. For his part, Clift was always supportive of Brando as an actor, even when his career began faltering after Mutiny on the Bounty (1962).

Turned down Dean Martin's role in Rio Bravo (1959), which would have reunited him with his Red River (1948) co-star John Wayne.

On the advice of his close friend Libby Holman, he turned down William Holden's role in Sunset Boulevard (1950) and Gary Cooper's role in High Noon (1952).

[on Marilyn Monroe] "Marilyn was an incredible person to act with, the most marvelous I ever worked with and I have been working for 29 years."

[on Elizabeth Taylor] "Liz is the only woman I have ever met who turns me on. She feels like the other half of me."

"Noah, from The Young Lions (1958), was the best performance of my life. I couldn't have given more of myself. I'll never be able to do it again. Never."
Explore the simpler time of yesteryear...
A time when men and women were truly glamorous. A time when you could watch any movie with your children and not have to worry about gratuitous sex or violence – yet enjoy all the lustful inferences and edge-of-your-seat suspense.
Welcome to The Timeless Theater!
We're in the process of identifying which of our films are in the Public Domain, and offering these for sale on DVD.
​Please stay Tuned...!
Check out our new Film Noir Collection:
Coffee Mugs!
Phone Cases!
iPad Cases!
More coming soon!