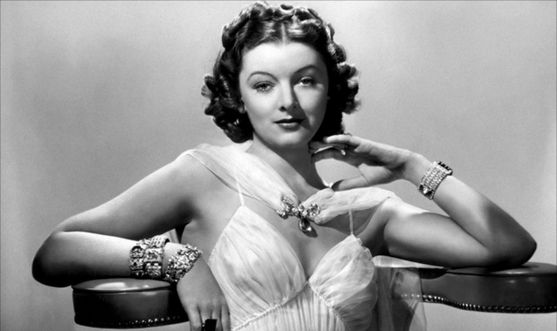 Myrna Loy was born Myrna Adele Williams on August 2, 1905 in Helena, Montana, to Adelle Mae (Johnson) and David Franklin Williams. Her paternal grandparents were Welsh, and her mother was of Scottish and Swedish descent. Myrna was raised in Helena and nearby Radersburg. Her father, a rancher, was the youngest person ever elected to the Montana State legislature.

At the age of thirteen, Myrna's father died of influenza, and the rest of the family moved to Los Angeles. She was educated in L.A. and the Westlake School for Girls where she caught the acting bug. She started at the age of 15 when she appeared in local stage productions in order to help support her family. Some of the stage plays were held in the now famous Grauman's Theater in Hollywood. Mrs. Rudolph Valentino happened to be in the audience one night who managed to pull some strings to get Myrna some parts in the motion picture industry.

Her first film was a small part in the production of What Price Beauty? (1925). Later, she appeared the same year in Pretty Ladies (1925) along with Joan Crawford. She was one of the few stars that would start in the silent movies and make a successful transition into the sound era. In her silent films, Myrna would appear as a Theda Bara-like, exotic, femme fatale. Later in the sound era, she would become a refined, wholesome character. Unable to land a contract with MGM, she continued to appear in small, bit roles, nothing that one could really call acting. In 1926, Myrna appeared in the Warner Brothers film called Satan in Sables (1925) which, at long last, landed her a contract. Her first appearance as a contract player was The Caveman (1926) where she played a maid. Although she was typecast over and over again as a vamp, Myrna continued to stay busy with small parts. Finally, in 1927, she received star billing in Bitter Apples (1927). The excitement was short lived as she returned to the usual smaller roles afterward.

Myrna would take any role that would give her exposure and showcase the talent she felt was being wasted. It seemed that she would play one vamp after another. She wanted something better. Finally her contract ran out with warner and she signed with MGM where she got two meaty roles. One was in the The Prizefighter and the Lady (1933), and the other as Nora Charles in The Thin Man (1934) with William Powell. Most agreed that the Thin Man series would never have been successful without Myrna. Her witty perception of situations gave her the image that one could not pull a fast one over on the no-nonsense Mrs. Charles. After The Thin Man (1934), Myrna would appear in five more in the series. Myrna was a big box-office draw. She was popular enough that, in 1936, she was named Queen of the Movies and Clark Gable the king in a nationwide poll of movie goers. Her popularity was at its zenith. She continued to make films through the 40s and 50s but the roles were fewer and fewer. By the 1960's the parts had all but dried up as producers and directors looked elsewhere for talent.

Trivia:
One of a handful of great movie stars never nominated for an acting Oscar, she received an honorary Academy Award in 1991.

In 1937, Myrna had a narrow escape when her horse bolted during the filming of The Rains Came (1939) with Tyrone Power; she was nearly killed.

In 1936 Myrna was named Queen of the Movies and Clark Gable King in a national poll, winning a crown of tin and purple velvet. in her autobiography, she says that she did not get on with Gable in her earlier films with him. However, in her later films he developed a respect for Loy and they became good friends.

Was supposedly the favorite star of famed outlaw John Dillinger. He came out of hiding to see Manhattan Melodrama (1934), in which she starred, and was gunned down by police upon leaving the theater.

Turned down the role of Ellie Andrews in It Happened One Night (1934). Claudette Colbert was given the part and went on to win the Best Actress Oscar for her performance.

[on William Powell] "The later ones [the "Thin Man" pictures] were very bad indeed, but it was always a joy to work with Bill Powell. He was and is a dear friend and, in the early Thin Man films with [director W.S. Van Dyke], we managed to achieve what for those days was an almost pioneering sense of spontaneity."

[Challenging MGM bosses in the 1930s] "Why does every black person in the movies have to play a servant? How about a black person walking up the steps of a courthouse carrying a briefcase?"

[on Clark Gable] "He happened to be an actor, a damned good one, and nobody knew it--least of all Clark. Oh, he wanted to be an actor, but he always deprecated his ability, pretended it didn't matter. He was a really shy man with a terrible inferiority in there somewhere. Something was missing that kept him from doing the things he could have done."

[on Burt Reynolds] "It's the man's tremendous wit that just keeps coming across. Listen, there is no acting style. Most people just play themselves. Spencer Tracy used to say to me after a scene, "Did I ham that one up?" If I said yes, he'd say, "Okay, let's do it again". There's that same honesty in Burt Reynolds. He's a throwback to the old school."

[on Doris Day] "I have nothing but the best to say about Doris Day. She was wonderful to me, really lovely. She sent flowers when I started and remained friendly and attentive. As I've said, it's difficult when you start stepping down. You fight so hard to get to the top and then you realize it's time to gracefully give in a little. Doris, who was riding high then, never played the prima dona. I appreciated her attitude enormously."

[on Montgomery Clift] "Monty was a great talent, whose acting I always admired. He had extraordinary instincts. His observations about the script were always astute and correct. He would have made a great director, which eventually he wanted to be. "Would you ever direct yourself?", I once asked him. "Are you kidding", he replied. "As a director, I simply wouldn't put up with all that crap from me". Monty was having problems then. He was full of all kinds of problems, many of them imaginary."

[In 1981, on her friend Joan Crawford] "Joan and I approached being movie stars in a different way. She liked to take limos everywhere; she was much "grander", for lack of a better word, and maybe I was much more down to earth, but so what? Joan certainly wasn't the only movie star who liked the champagne and limousine treatment. I can tell you that when you made a friend in Joan you had a friend for life. She never forgot your birthday, and you'd get a congratulatory note from her when good things happened in your life. She cared about people and her friends, no matter what anybody says. I liked her, and I miss her, and I think her daughter's stories are pure bunk. Even if they were true, if ever there was a girl who needed a good whack it was spoiled, horrible Christina [Christina Crawford]. Believe me, there were many times I wanted to smack her myself."

[on her character "Nora Charles" from the "Thin Man" films] "Nora of "The Thin Man" was different . . . Nora had a gorgeous sense of humor; she appreciated the distinctive grace of her husband's wit. She laughed . . . at him and with him when he was funny. What's more, she laughed at herself. Besides having tolerance, she was a good guy. She was courageous and interested in living and she enjoyed doing all the things she did. You understand, she had a good time, always."

[on Ronald Reagan] "I never worked with Ronald Reagan. I'm not happy that he's President. I was willing to give him a chance. But he's destroying everything now I've lived my life for."

[on Joan Crawford] "Joan never complained about her difficult children. Christina and Christopher made me glad I didn't have children."

[on "The Thin Man" series ending] "It was the drinking. The characters drank too much, and for a while the public didn't seem to mind all the martinis and all the hangovers, but then, after a while, they did, or at least the studio maintained that was what happened."
Explore the simpler time of yesteryear...
A time when men and women were truly glamorous. A time when you could watch any movie with your children and not have to worry about gratuitous sex or violence – yet enjoy all the lustful inferences and edge-of-your-seat suspense.
Welcome to The Timeless Theater!
We're in the process of identifying which of our films are in the Public Domain, and offering these for sale on DVD.
​Please stay Tuned...!
Check out our new Film Noir Collection:
Coffee Mugs!
Phone Cases!
iPad Cases!
More coming soon!