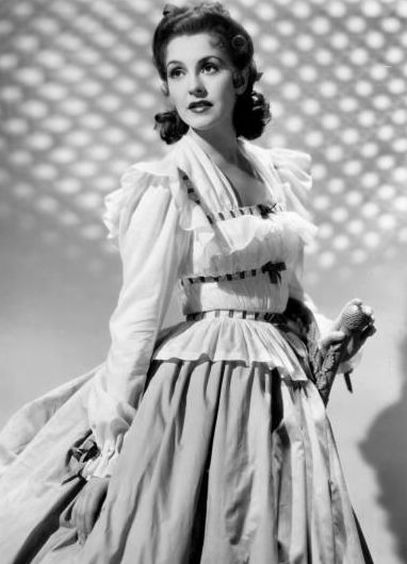 Coached by her show-business mother, a former actress, brunette Nancy Kelly started her career as a one-year-old model for James Montgomery Flagg. While receiving her education at the Bentley School for Girls she also trained as an actress. From 1926, the precociously talented Nancy became one of the most prolific of Hollywood child actresses with performances opposite established stars like Gloria Swanson and Jean Hersholt.

In 1929, she appeared on Broadway in a revival of "Macbeth". As an adult actress she displayed a greater flair for drama than comedy. Nancy gave a strong performance as an aviatrix in Tail Spin (1939), co-starring with Alice Faye. She was also a leading lady to Tyrone Power in the A-grade western Jesse James (1939). She had a pleasing supporting role in the lavish musical Show Business (1944) and the lead in an intelligent low-budget horror movie, Woman Who Came Back (1945), in which she portrayed a woman who believed herself to be the reincarnation of a witch burned at the stake 300 years prior.

Walter Kerr of the New York Herald Tribune wrote of her Tony Award-winning stage performance: "Though Miss Kelly has done attractive work on Broadway before, she has never really prepared us for the brilliance of the present portrait" (New York Times, January 14 1995). Nancy was also nominated for an Academy Award as Best Actress for her film role, but ultimately lost out to Ingrid Bergman in Anastasia (1956). Following "The Bad Seed", Nancy appeared almost exclusively on the small screen. She died from diabetes-related complications in January 1995.