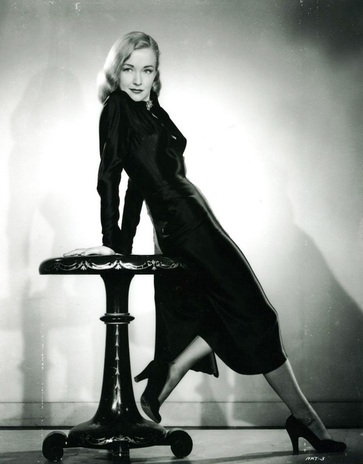 A tall, cool drink of water best sums up this confidant blonde actress of 40s "B" mysteries, melodrama, film, and the occasional sparkling comedy at Columbia Studios. Nina was born with the unusually multi-ethnic name of Nina Consuelo Maud Fock, her father being the renowned Dutch composer and conductor Dirk Fock, and her mother the stage and silent film actress Consuelo Flowerton, who once worked in a Valentino movie. Her parents divorced while she was a toddler and she and her mother moved to New York where Nina was encouraged to indulge in her creative and artistic leanings. A teen concert pianist, Nina also excelled at painting and sculpture, but it was acting that captured her heart. With that, she trained at the American Academy of Dramatic Arts and became an enthusiastic exponent of the "Method" technique after studying with acting gurus Lee Strasberg and Stella Adler.

Revising her last name to a classier sounding "Foch", Nina appeared briefly on the regional stage before earning a starlet contract with Columbia at age 19. Her debut in Bela Lugosi's The Return of the Vampire (1943) was followed by featured roles in other more or less modest efforts. She had her first standout role in the popular Chopin biopic A Song to Remember (1945) starring Cornel Wilde, which led to Nina's title role in one of her best films My Name Is Julia Ross (1945), earning major plaudits as a heroine on the brink of madness. Despite her obvious capabilities, she became inextricably entrenched in secondary movie fare, some of them nevertheless achieving near cult status such as I Love a Mystery (1945), The Guilt of Janet Ames (1947), The Dark Past (1948), and her last for Columbia, Johnny Allegro (1949) with George Raft.

Nina relieved some of the disappointment of her film career by actively pursuing the stage, where she scored a Broadway hit with the classy comedy "John Loves Mary" in 1947, followed by productions of "The Respectful Prostitute" and "Twelfth Night". A one-time member of the American Shakespeare Festival at Stratford, she performed as Isabella in "Measure for Measure" and Katharine in "The Taming of the Shrew". She wasted no time securing early TV drama work and numerous summer stock roles also added to her enjoyment. MGM utilized her in a supporting capacity for some of their films, notably the ritzy patron and paramour-in-waiting of artist Gene Kelly whom she loses to Leslie Caron in An American in Paris (1951). The studio also handed her the Oscar-nominated role of the lonely but altruistic executive secretary in the all-star ensemble drama Executive Suite (1954). While Nina customarily lent poise and class to her on-camera roles in the late 50s and 60s, she seldom was given the chance to truly shine in the ensuing years. Nothing underscored this problem better than her standard featured parts in The Ten Commandments (1956) and Spartacus (1960).

In later years Nina was seen less and less, but became a widely respected acting teacher in the Los Angeles area (notably USC) and has directed on stage. She also has been a senior faculty member at the American Film Institute. Recent recurring stints on TV in such shows as "Bull" and "Navy CIS" confirms the octogenarian is still a lovely and vibrant talent. She also has been given credit as an acting coach from time to time in such films as Encino Man (1992). Married and divorced three times, one of her ex-husbands is the bearded academic and host James Lipton of Inside the Actors Studio (1994) fame on the Bravo cable station. She divorced her third husband, stage producer Michael Dewell, in 1993. Nina has lived in Beverly Hills for the past forty years, and has one child, a son, Dr. Dirk de Brito.

Trivia:
Played the first person whose murder was investigated by the TV detective Lt. Columbo; killed in the pilot episode/TV movie Prescription: Murder (1968).

Fell ill while teaching "Directing the Actor," a popular course at USC's School of Cinematic Arts, where she taught for 40 years. She died a day later at the Ronald Reagan UCLA Medical Center of complications from long-term myelodysplasia, a blood disorder.

Nina and her husband James Lipton became lifelong friends with Diana Ross after co-starring with her in Mahogany (1975).

Although she played Charlton Heston's adoptive mother, Yul Brynner's aunt and Cedric Hardwicke's sister in The Ten Commandments (1956), she was a year younger than Heston, four years younger than Brynner and 31 years younger than Hardwicke.
Explore the simpler time of yesteryear...
A time when men and women were truly glamorous. A time when you could watch any movie with your children and not have to worry about gratuitous sex or violence – yet enjoy all the lustful inferences and edge-of-your-seat suspense.
Welcome to The Timeless Theater!
We're in the process of identifying which of our films are in the Public Domain, and offering these for sale on DVD.
​Please stay Tuned...!
Check out our new Film Noir Collection:
Coffee Mugs!
Phone Cases!
iPad Cases!
More coming soon!