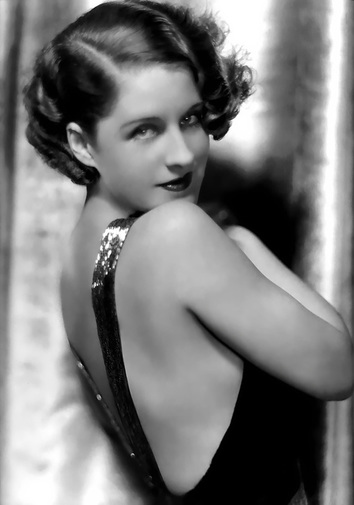 The winner of a beauty contest at 14, she was born into a wealthy family that lost everything in the 1910s. Her mother brought her to New York in the hope that show business might provide the family with money. Shearer failed an audition with Florenze Ziegfeld but found some work as a model. She began appearing in bit roles in New York-shot films in 1920; in one of these, The Stealers (1920), she was spotted by talent scout Irving Thalberg, who couldn't track her down until 1923.

Signed to a long-term screen contract in 1925, she began playing leads in numerous films. Meanwhile, Thalberg rose to a position of authority at MGM; she married him in 1927 and started getting the best roles the studio had to offer, leading her to stardom. Shearer got her pick of directors and scripts, and made sure to vary her work so she would avoid being typecast. She received five Oscar nominations, winning for The Divorcee (1930). Soon she was billed by MGM as "the First Lady of the Screen."

Thalberg died at age 37 in 1936, after which Shearer showed bad judgment in her choice of films; she turned down the leads in Gone with the Wind and Mrs. Miniver and instead appeared in two consecutive flops, We Were Dancing and Her Cardboard Lover (both 1942). After that she retired from the screen, meanwhile marrying a ski instructor 20 years her junior.

Trivia:
Even after retirement, Norma maintained her interest in the film industry. While staying at a ski lodge, she noticed a photo of the receptionist's daughter and recommended her to MGM - that girl, became the star known as Janet Leigh. She also discovered a handsome young businessman beside a swimming pool - now actor/producer Robert Evans.

Six years after the death of first husband Irving Thalberg, she married a ski instructor 11 years her junior and retired from the screen forever.

Was meticulous about her appearance. Early in her career, she spent money she could barely afford on the services on an eye doctor, who trained her to strengthen a weak eye. She swam everyday, had massages to firm her figure, and dieted religiously. She experimented with make-up until she decided on a light tone that would illuminate her face on screen.

Was offered the role of Norma Desmond in Sunset Boulevard (1950), but she turned it down. Gloria Swanson, who went on to receive a Best Actress Oscar nomination for her performance, was cast instead.

Norma Shearer was considered by her peers as the Queen of MGM Studios.

"Scarlett O'Hara is going to be a thankless and difficult role. The part I'd like to play is Rhett Butler."

"I get whatever placidity I have from my father. But my mother taught me how to take it on the chin."

"It is impossible to get anything made or accomplished without stepping on some toes; enemies are inevitable when one is a doer."

"The morals of yesterday are no more. They are as dead as the day they were lived. Economic independence has put woman on exactly the same footing as man."

"Never let them see you in public after you've turned 35. You're finished if you do!"
Explore the simpler time of yesteryear...
A time when men and women were truly glamorous. A time when you could watch any movie with your children and not have to worry about gratuitous sex or violence – yet enjoy all the lustful inferences and edge-of-your-seat suspense.
Welcome to The Timeless Theater!
We're in the process of identifying which of our films are in the Public Domain, and offering these for sale on DVD.
​Please stay Tuned...!
Check out our new Film Noir Collection:
Coffee Mugs!
Phone Cases!
iPad Cases!
More coming soon!