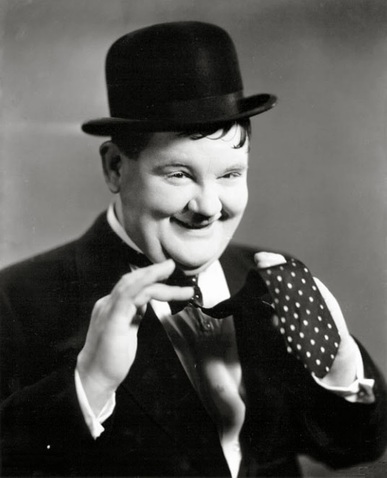 Although his parents were never in show business, as a young boy Oliver Hardy was a gifted singer and, by age eight, was performing with minstrel shows. In 1910 he ran a movie theatre, which he preferred to studying law. In 1913 he became a comedy actor with the Lubin Company in Florida and began appearing in a long series of shorts; his debut film was Outwitting Dad (1914). He appeared in he 1914-15 series of "Pokes and Jabbs" shorts, and from 1916-18 he was in the "Plump and Runt" series.

From 1919-21 he was a regular in the "Jimmy Aubrey" series of shorts, and from 1921-25 he worked as an actor and co-director of comedy shorts for Larry Semon. In addition to appearing in two-reeler comedies, he found time to make westerns and even melodramas in which he played the heavy. He is most famous, however, as the partner of British comic Stan Laurel, with whom he had played a bit part in The Lucky Dog (1921). in the mid-1920s both he and Laurel wee working for comedy producer Hal Roach, although not as a team. In a moment of inspiration Roach teamed them together, and their first film as a team was 45 Minutes from Hollywood (1926).

Their first release for Roach through MGM was Sugar Daddies (1927) and the first with star billing was From Soup to Nuts (1928). They became a huge hit as a comedy team, and after several years of two-reelers, Roach decided to star them in features, their first of which was Pardon Us (1931). They clicked with audiences in features, too, and starred in such classics as Way Out West (1937), Babes in Toyland (1934) and Block-Heads (1938). They eventually parted ways with Roach and in the mid-1940s signed on with Twentieth Century-Fox.
Unfortunately, Fox did not let them have the autonomy they had at Roach, where Laurel basically wrote and directed their films, though others were credited, and their films became more assembly-line and formulaic. Their popularity waned and less popular during the war years, and they made their last film for Fox in 1946. Several years later they made their final appearance as a team in a French film, a troubled and haphazard production eventually, after several name changes, called Utopia (1951), generally regarded to be their worst film.

Hardy appeared without Laurel in a few features, such as Zenobia (1939) with Harry Langdon, The Fighting Kentuckian (1949) in a semi-comedic role as a frontiersman alongside John Wayne and Riding High (1950), in a cameo role. He died in 1957.

Every puddle his character stepped in appeared to be endlessly deep (He would step into a small puddle and would suddenly be over his head in water).

When Ollie died in 1957, his partner, Stan Laurel, pledged he would never perform again. Despite offers, he never did.

Used Babe Hardy for a screen name until convinced by a numerologist that the longer screen name, Oliver Hardy, would bring him success.

Despite rumors over the years, he did not die from the effects of obesity--quite the contrary. Dieting on doctor's orders, he took off too much weight too fast, going from 300+ pounds to 150 in a matter of a few weeks, weakening his constitution well past the danger point. It was becoming dangerously underweight in this manner that brought about his final illness and death.

A man of many interests, Hardy was an excellent cook, card player, golfer, singer and dancer, and unlike "Ollie", was always impeccably tailored. Off camera, he and Laurel both combed their hair straight back, as was the fashion of their time.

While he and Stan Laurel were between contracts with Hal Roach, John Wayne asked him to co-star in The Fighting Kentuckian (1949), a film Wayne was producing. Wayne and Hardy had previously appeared together on stage for a wartime benefit, and Wayne knew the value of comedy in his pictures. Hardy at first refused, fearing rumors of a breakup with Stan; but Laurel encouraged his partner to take the role and Hardy delivered a memorable light comedy performance.

Hardy's favorite restaurant meal was a 32-ounce steak medium well, potatoes fried in pure lard, a salad, and a pot of coffee.

"I don't know much, but I know a little about a lot of things."

[explaining his and Stan Laurel's success] "The world is full of Laurel and Hardys. I saw them all the time as a boy at my mother's hotel. There's always the dumb, dumb guy, who never has anything bad happen to him, and the smart guy who's even dumber than the dumb guy, only he doesn't know it."

[his usual response when asked about how they made the films] "You better ask Stan."

[on his physical grace and athleticism]: "I hate to see big men lurching around all over the place."