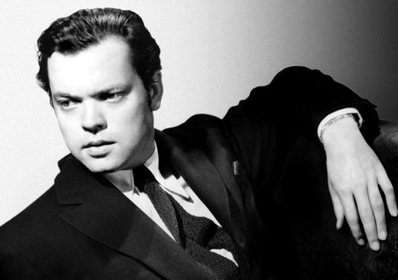 The most well-known filmmaker to the public this side of Alfred Hitchcock, Orson Welles was the classic example of the genius that burns bright early in life only to flicker and fade later. The prodigy son of an inventor and a musician, Welles was well-versed in literature at an early age -- particularly Shakespeare -- and, through the unusual circumstances of his life (both of his parents died by the time he was 12, leaving him with an inheritance and not many family obligations), he found himself free to indulge his numerous interests, which included the theater.

He was educated in private schools and traveled the world, even wangling stage work with Dublin's Gate Players while still a teenager. He found it tougher to get onto the Broadway stage, and traveled the world some more before returning to get a job with Katharine Cornell, with help from such notables as Alexander Woollcott and Thornton Wilder. He later became associated with John Houseman, and, together, the two of them set the New York theater afire during the 1930s with their work for the Federal Theatre Project, which led to the founding of the Mercury Theater.

The Mercury Players later graduated to radio, and their 1938 "War of the Worlds" broadcast made history when thousands of listeners mistakenly believed aliens had landed on Earth. In 1940, Hollywood beckoned, and Welles and company went west to RKO, where he began his short-lived reign over the film world. Working as director, producer, co-author, and star, he made Citizen Kane (1941), the most discussed -- if not the greatest -- American movie ever created. It made striking use of techniques that had been largely forgotten or overlooked by other American filmmakers, and Welles was greatly assisted on the movie by veteran cinematographer Gregg Toland. Kane, himself, attracted more attention than viewers, especially outside the major cities, and a boycott of advertising and coverage by the newspapers belonging to William Randolph Hearst -- who had served as a major model for the central figure of Charles Foster Kane -- ensured that it racked up a modest loss.

Welles second film, The Magnificent Ambersons, ran into major budget and production problems, which brought down the studio management that had hired him. With the director overextending himself, the situation between Welles and RKO deteriorated. Faced with a major loss on a picture that was considered unreleasable, RKO gained control of the film and ordered it recut without Welles' consent or input, and the result is considered a flawed masterpiece. However, it was a loss for RKO, and soon after the Mercury Players were evicted from RKO, word quickly spread through the film community of Welles' difficulty in adhering to shooting schedules and budgets. His career never fully recovered, and, although he directed other films in Hollywood, including The Stranger (1946), Macbeth (1948), and Touch of Evil (1958), he was never again given full control over his movies.

European producers, however, were more forgiving, and with some effort and help from a few well-placed friends, Welles was able to make such pictures as Othello (1952), Chimes At Midnight (1967), and The Trial (1963). He also remained highly visible as a personality -- he discovered in the mid-'40s that, for 100,000 dollars a shot, he could make money as an actor to help finance his films and his fairly expensive lifestyle, which resulted in Welles' appearances in The Third Man (1949), The Roots of Heaven (1958), and Catch-22 (1970), among other pictures. He also made television appearances, did voice-overs and recordings, and occasional commercials until his death in 1985.

Despite his lack of commercial success, Welles remains one of the most well-known, discussed, and important directors in the history of motion pictures.

Frank Sinatra was the godfather of his and Rita Hayworth's daughter, Rebecca Welles.

Has the distinction of appearing in both the American Film Institute and British Film Institute's #1 movie. For AFI, it was Citizen Kane (1941). For BFI, it was The Third Man (1949). Welles shares this distinction with Joseph Cotten, who also starred in both movies.

Was suggested as a possible suspect by author Mary Pacios, in the mutilation murder of actress Elizabeth Short, known as "The Black Dahlia" case, in Los Angeles in 1947. Among other reasons, Pacios suggested Welles as a suspect because Welles' artwork for the surreal bizarre funhouse set in The Lady from Shanghai (1947) was similar in many ways to the mutilation and bisection of Elizabeth Short. Harry Cohn, the head of Columbia Pictures--the studio that produced The Lady from Shanghai--ordered the footage cut before release because of its disturbing resemblance to the murder.

Lobbied to get the role of Don Vito Corleone in The Godfather (1972), even offered to lose a good deal of weight in order to get the role. Francis Ford Coppola, a huge fan of his, had to turn him down because he already had Marlon Brando in mind for the role and felt Welles would not be right for the role.

He made The Lady from Shanghai (1947) towards the end of his marriage to Rita Hayworth. They were constantly fighting at the time and (some say as a comeuppance to Hayworth) he made her cut off most of her long, luxurious red hair and dye it bright platinum blonde.

John Ford, whom Welles admired as the greatest American director and who, in turn, admired Welles as a director and actor, wanted to cast him as Mayor Frank Skeffington in his movie adaption of Edwin O'Connor's novel The Last Hurrah (1958). Welles was unable to accept the role due to scheduling conflicts, and Spencer Tracy was cast instead.

Was George Lucas' first choice as the voice for Darth Vader, but he thought the voice would be too recognizable.

"I started at the top and worked down.

"I'm not bitter about Hollywood's treatment of me, but over its treatment of D.W. Griffith, Josef von Sternberg, Erich von Stroheim, Buster Keaton and a hundred others."

[on Citizen Kane (1941) being colorized] "Keep Ted Turner and his goddamned Crayolas away from my movie."

"My doctor told me to stop having intimate dinners for four. Unless there are three other people."

"I have the terrible feeling that, because I am wearing a white beard and am sitting in the back of the theater, you expect me to tell you the truth about something. These are the cheap seats, not Mount Sinai."

[on James Cagney] "No one was more unreal and stylized, yet there is no moment when he was not true."

[asked about the rumor that he directed part of Compulsion (1959), credited to Richard Fleischer] "Dick Fleischer is a director who doesn't need and wouldn't welcome any help from me."

[on his friend William Faulkner] "I never saw him anything but wildly drunk through the years. He must have been sober to produce that great body of work."
Explore the simpler time of yesteryear...
A time when men and women were truly glamorous. A time when you could watch any movie with your children and not have to worry about gratuitous sex or violence – yet enjoy all the lustful inferences and edge-of-your-seat suspense.
Welcome to The Timeless Theater!
We're in the process of identifying which of our films are in the Public Domain, and offering these for sale on DVD.
​Please stay Tuned...!
Check out our new Film Noir Collection:
Coffee Mugs!
Phone Cases!
iPad Cases!
More coming soon!