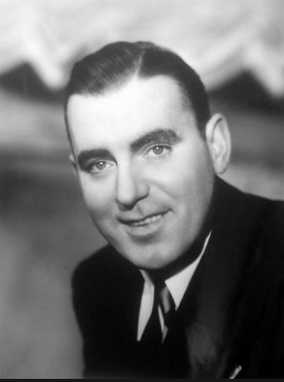 American actor Pat O'Brien could never remember just why he wanted to go on stage; it just sort of happened naturally, just as his college football activities at Marquette University and his enlistment in the Navy for World War I. In the company of college chum Spencer Tracy, O'Brien moved to New York in the early twenties, where, while studying at Sargent's Academy, they were cast as robots in the theatrical production RUR. O'Brien spent several years with numerous stock companies, forming lasting friendships with such future Hollywood notables as Frank McHugh, James Gleason and Percy Kilbride. He also met his wife, actress Eloise Taylor, with whom he remained for the next five decades.

In 1930, O'Brien was brought to Hollywood to play ace reporter Hildy Johnson in The Front Page (1931); this came about because the director mistakenly believed O'Brien had played the role on Broadway, when in fact he'd played managing editor Walter Burns in a Chicago stock-company version. This misunderstanding was forgotten when O'Brien scored a success in Front Page, which led to a long term contract with Warner Bros. Casual film fans who believe that O'Brien played nothing but priests and football coaches might be surprised at the range of roles during his first five years at Warners. Still, the performances for which Pat O'Brien is best remembered are Father Jerry in Angels with Dirty Faces (1938), in which he begs condemned killer Jimmy Cagney to "turn yellow" during the Last Walk so Cagney won't be a hero to the neighborhood kids, and, of course, the title role in Knute Rockne, All American (1940), wherein he exhorted his flagging team to "win just one for the Gipper."

Too old to serve in World War II, O'Brien tirelessly did his bit with several hazardous USO tours in the thick of the action. Following the war, O'Brien continued to play leads in a good series of RKO films, but he'd put on weight and lost a few hairs in the years since his Warner Bros. heyday, thus was more effectively cast in character roles like Dean Stockwell's vaudeville dad in The Boy With Green Hair (1949). Then, inexplicably, the roles dried up. O'Brien always believed that he was the victim of a blacklist -- not for being a Communist, but for being such a right winger that he was frozen out by Hollywood's liberal contingent. The diminishing box office for his films and an overall slump in the movie industry may also have played a part in O'Brien's fall from grace, but the fact was he found the going rough in the '50s. Fortunately, he had an aggresive agent and several loyal friends -- notably Spencer Tracy, who refused to star in MGM's The People Against O'Hara unless the studio set aside a big part for O'Brien.

Television and summer stock kept O'Brien busy throughout most of the 1950s, with a brief comeback to stardom via a good part in Billy Wilder's Some Like It Hot (1959) and a weekly TV sitcom, "Harrigan and Son" (1960). O'Brien also worked up a well-received nightclub act, in which he described himself as "an Irish Myron Cohen" (Cohen was a popular Jewish dialect comedian of the era). Unlike his close friend James Cagney, O'Brien never stopped working, touring with his wife Eloise in straw hat productions of Never too Late and On Golden Pond. His performances proved that this was no pathetic oldster clinging desperately to the past, but a vibrant, up-to-date talent who could still deliver the goods. Nor was Pat O'Brien falsely modest. In answer to an interviewer's query if he felt that he'd been underrated by Hollywood, the seventy-plus O'Brien mustered all his Irish pugnacity and snapped "I'm damn good and I know it." As did everyone who saw Pat O'Brien's feisty final film performances in The End (1978) and Ragtime (1981).

Available Films:
Trivia:
Pat was a great personal friend of fellow Irish-American actor James Cagney, from the early days of their career right up to Pat's death in 1983. They also starred in seven films together, Pat often playing the role of a Catholic priest.

[on Knute Rockne] "He was not only a great coach but also an extraordinary human being, and I felt privileged, humble, trying to convey the glory and the humanness that was 'Rock'. And there were frightening moments when I briefly felt as if I were Knute Rockne."

"John Ford, the old master, is the orderly type. Working for him is like being part of a ballet. He hardly ever moves the camera, but composes his shots like a master painter, a Rembrandt or Degas. The actor becomes part of the scene. Ford lets the action swirl past his lens. But the reality of his seamen, miners, dust-bowlers, horse soldiers, or Wesrern heroes, when he is at his best, is a literature that the screen rarely gets. Working for him one feels a special pride. Lewis Milestone is a bouncing camera mover. For him the seeing eye is all. He stands the camera on its head, rolls it, rushes it, brings it in on the run. The actors are part of the scenery, and they must fight to survive, come alive while he catches them on the run. Neither men are static directors. They don't care for too much talk in their script, or stage business over meaningless chatter."
Explore the simpler time of yesteryear...
A time when men and women were truly glamorous. A time when you could watch any movie with your children and not have to worry about gratuitous sex or violence – yet enjoy all the lustful inferences and edge-of-your-seat suspense.
Welcome to The Timeless Theater!
We're in the process of identifying which of our films are in the Public Domain, and offering these for sale on DVD.
​Please stay Tuned...!
Check out our new Film Noir Collection:
Coffee Mugs!
Phone Cases!
iPad Cases!
More coming soon!