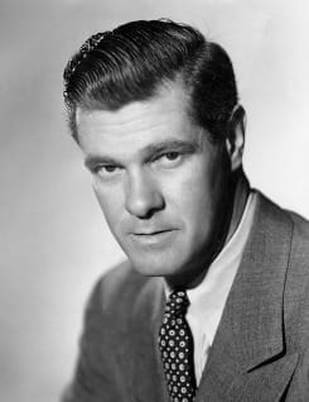 In retrospect, actor Paul Kelly may have had more high drama in his off-camera life than he did in his rich stage and screen life. How many Broadway and/or Hollywood actors have survived career-wise after serving a prison term for manslaughter? Kelly, whose drive, ambition and talent were undeniably strong, managed to do just that.

Lean, reddish-haired, athletically-inclined Irish-Catholic Paul Michael Kelly grew up on the tough streets of Brooklyn, New York, born August 9, 1899, the ninth of ten children. Father Michael owned a bar called Kelly's Cafe. He died while Paul was still quite young and the entire clan was required to pitch in financially. Young Paul, who wound up making his Broadway debut at age 8 in "The Grand Army Man", did quite well for his family. His father's establishment was located very close to the Vitagraph Studios and the studio used to borrow furniture from the saloon for their sets. As partial repayment (at the request of his mother), the studio would use Paul for some of their one-reel silents. The boy eventually became the resident moppet at the studio (from 1911 on), appearing with such top matinée heavyweights as Maurice Costello and Constance Talmadge. He went on to play the son in "The Jarr Family" series of one-reel adventures starring Harry Davenport as the patriarch.

Paul managed to transition into teen and young adult roles alternating between theater and movie assignments. Hit Broadway shows included "Little Women" (1916), Booth Tarkington's "Seventeen" (1918) and the highly popular "Penrod" starring Helen Hayes (also 1918). On celluloid he was romantically paired with Mary Miles Minter in the silent classic Anne of Green Gables (1919) and the success of that film moved him into even higher contention. The early 20s continued to be fruitful for Paul especially behind the theater footlights where he joined such esteemed leading ladies as Doris Kenyon in "Up the Ladder" (1922) and Blanche Yurka in "The Sea Woman" (1925). Movies also beckoned with The Great Adventure (1921), The New Klondike (1926), Slide, Kelly, Slide (1927) and Special Delivery (1927). Paul was certainly on the right track as he broached out-and-out stardom.

It was the love of a woman in the form of actress Dorothy Mackaye, however, that temporarily proved his undoing. Paul met Dorothy and her husband, Ziegfeld Follies song-and-dance man Ray Raymond (1888-1927), while playing in New York and the three became fast friends and party-hearty cronies. They reconnected again years later when all had moved to Hollywood to pursue film. Dorothy's shaky marriage, primarily due to Raymond's chronic drinking and prone to violence, put Paul in a sympathetic mode with the battered Dorothy, which abruptly evolved into a torrid love affair. By April 16, 1927, the couple's cover had been blown wide open and, on that day, escalated into violence when the two men duked it out for the affections of Dorothy. The inebriated Ray came out the definite loser in the fight and died a few days later of a brain hemorrhage reportedly from his pummeling; his acute alcoholism was later figured in as a contributing factor to his death. The tabloids had a field day. Paul was convicted of manslaughter and sentenced to one to ten years in prison; Dorothy was also sentenced as an accessory after the fact and for alleged concealment of facts involving her husband's death (she tried to convince police that he died of "natural causes"). She was eventually released on bond after serving ten months; Paul was paroled in August of 1929 for "good behavior" after serving 25 months.

Paul and Dorothy's strong bond survived the entire ordeal and in 1931 they married after Paul's parole board permitted it. Surprisingly, Paul was not shunned by Broadway. He took his first post-prison Broadway curtain call in a 1930 musical revue and went on to appear in the short-lived play "Bad Girl" (1930) opposite Sylvia Sidney. Within the next two years he appeared in "Hobo", "Just to Remind You", "Adam Had Two Sons", and "The Great Magoo". Although none were hits, he was firmly establishing himself once again. Hollywood didn't desert him either although he was now relegated to "B" supporting roles with an occasional starring part thrown in for good measure. The virile, thin-lipped actor with trademark jut jaw and iron resolve received consistently good notices for his hard-boiled parts, including Broadway Thru a Keyhole (1933), The President Vanishes (1934) and Song and Dance Man (1936).

More high drama entered the picture when wife Dorothy was killed in a car accident in January of 1940. The grieving widower with one child in tow (he adopted Dorothy's child, Valerie Raymond, whose name was changed to Mimi Kelly) and became quite a workaholic to quell the pain. In such films as The Flying Irishman (1939), The Roaring Twenties (1939), Invisible Stripes (1939), Queen of the Mob (1940), The Howards of Virginia (1940), Wyoming (1940), Mystery Ship (1941), Mr. and Mrs. North (1942), Tarzan's New York Adventure (1942), The Story of Dr. Wassell (1944), San Antonio (1945), The Cat Creeps (1946) and Crossfire (1947), Paul gave a number of sharp, potent portrayals, freelancing often as either an unyielding police official or sadistic bad guy. He found love again on the film set of Flight Command (1940) and married one of the film's bit part players Claire Owen (née Zona Mardelle Zwicker) in January of 1941. She subsequently retired from acting and went on to survive him.

Career satisfaction came with his work on Broadway. During the 1947-1948 season, he was nominated and won a Tony Award (tying with Henry Fonda and Basil Rathbone) for his performance in "Command Decision", and earned the Donaldson and Variety Critic's awards to boot. In 1950 he went on to earn further acclaim for originating the part of Frank Elgin, the alcoholic actor in Clifford Odets' classic drama "The Country Girl" also starring Uta Hagen. Not a big enough movie draw, he lost both of these prestigious parts on film to Clark Gable and Bing Crosby, respectively. Paul made do by also finding plentiful work on standard TV drama in the 1950s. After suffering a heart attack in 1953, the 57-year-old character actor was stricken again on Election Day, November 6, 1956, this time fatally, just after returning home from voting.
- IMDb Mini Biography By: Gary Brumburgh / gr-home@pacbell.net

Available Films:
Trivia:
In 1927, he spent 25 months in California's infamous San Quentin prison for beating to death Ray Raymond, the former husband of Dorothy Mackaye, an actress who would later become his wife (judged an accomplice for withholding information, she herself was briefly imprisoned).

Won Broadway's 1948 Tony Award as Best Actor (Dramatic) for "Command Decision." The award was shared with Henry Fonda for "Mister Roberts" and Basil Rathbone for "The Heiress.".

In an episode of the popular TV series "History's Mysteries" entitled "Five Points Gangs," which chronicled the infamous New York gangster-ridden slum, a picture of Kelly in character from "The Roaring Twenties" is used to represent notorious racketeer Paolo Antonio Vaccarelli (AKA Paul Kelly 1876-1936).

Kelly's last film before the manslaughter charge was The Poor Nut (1927) which was not released until the following August, by which time Kelly was behind bars. As a result, the film's distributors opted to remove Kelly's name from the credits, even though he played a prominent supporting role.
Explore the simpler time of yesteryear...
A time when men and women were truly glamorous. A time when you could watch any movie with your children and not have to worry about gratuitous sex or violence – yet enjoy all the lustful inferences and edge-of-your-seat suspense.
Welcome to The Timeless Theater!
We're in the process of identifying which of our films are in the Public Domain, and offering these for sale on DVD.
​Please stay Tuned...!
Check out our new Film Noir Collection:
Coffee Mugs!
Phone Cases!
iPad Cases!
More coming soon!