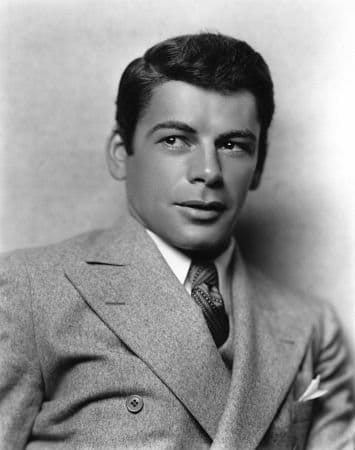 Born in 1895 in what was then Austria and what is now Russia, Paul Muni was brought to the U.S. in 1902 by his parents, who were both touring Yiddish-language actors. Muni made his stage debut in 1907, and before reaching his teen years was recruited by Maurice Schwartz's Yiddish Art Theatre, where Muni specialized in playing very old men. He did not perform in English until he was 29; his first Broadway appearance was in 1926's We Americans. Minus the character makeup which distinguished most of his earlier stage appearances, Muni scored a hit as a gangster in the Broadway production Four Walls. He was signed by Fox Studios in 1929, but he was so displeased by his first two films (The Valiant and Seven Faces) that he hurried back to Broadway.

In 1931, Muni starred in the original stage production of Counsellor at Law, and also resumed his film career, playing a sister-obsessed Al Capone-type in Scarface. With his still-powerful portrayal of a hunted (and haunted) convict in I Am a Fugitive From a Chain Gang (1932), Muni launched his long association with Warner Bros. Insisting upon being permitted the broadest range of characterizations possible, Muni alternated between "entertainments" like Dr. Socrates and prestige pictures which allowed him to don makeup and experiment with accents. He is most fondly remembered for his trio of biographies: 1936's The Story of Louis Pasteur (which won Muni his Oscar), 1937's The Life of Emile Zola, and 1939's Juarez. On the set, Muni was almost completely reliant upon the advice and counsel of his wife; if she didn't like a "take," the scene would have to be reshot.

Like many highly individual talents, Muni gained a reputation as an eccentric, his character quirks ranging from relaxing between takes by playing his violin to (reportedly) going into a panic whenever he saw someone wearing the color red. Extremely self-involved, Muni often came to the set with his performance totally developed in advance, and did not alter his interpretation no matter what nuances or surprises his fellow actors might throw at him. After a long period of professional disappointments, Muni made a triumphant comeback in the role of the Clarence Darrow-like Henry Drummond in the 1955 Broadway production Inherit the Wind, for which he won the Tony award. After his final film, The Last Angry Man, Paul Muni was forced to curtail his appearances due to encroaching physical infirmities; one of his last performances was in the TV play The Last Clear Chance, wherein Muni was seen sporting a hearing aid through which he was "fed" his dialogue.

In addition to his Best Actor win for Pasteur and his four Best Actor nominations for The Valiant, Chain Gang, Zola and The Last Angry Man, Muni received an "unofficial" Best Supporting Actor nomination, as a write-in candidate, for Casablanca helmer Michael Curtiz's 1935 Black Fury; he came in second. Hampered by increasing blindness that kept him out of work, Paul Muni died on August 25, 1967 of a heart ailment, one month shy of his 72nd birthday.

Available Films:
Trivia:
One of only six actors to receive an Academy Award nomination for Best Actor for his first screen appearance. The other five actors are: Orson Welles, Lawrence Tibbett, Alan Arkin, James Dean and Montgomery Clift.

Suffered all his life from a rheumatic heart.

Received Oscar nominations for both his first and last screen performances (The Valiant (1929) and The Last Angry Man (1959)).

Turned down the role of Roy Earle in High Sierra (1941), which was eventually given to Humphrey Bogart.

A man of 5' 9" height, he wore small lifts (adding three or four inches) and padding to appear more hulking and ape-like as Tony in Scarface (1932).

He and James Dean are the only actors to receive an Academy Award nomination for both their first and last screen appearance.

He once told Clifford Odets about how he gave up boxing because it endangered his secondary career as a violinist. This inspired Odets to write "Golden Boy" (its film adaptation Golden Boy (1939) was directed by Rouben Mamoulian).

"I don't want to be a star. If you have to label me anything, I'm an actor - I guess. A journeyman actor. I think "star" is what you call actors who can't act."

"I won't go up in a plane, but if a play crashes, I'll jump into the next one that comes along and take it up for a spin."

"I've never tried to learn the art of acting. I have been in the business for years but I still can't tell what acting is or how it's done."

[on Robert Donat's performance in Goodbye, Mr. Chips (1939)] "The most magnificent performance I've ever seen on any screen. Not a false motion - not a wasted gesture. He is the greatest actor we have today."
Explore the simpler time of yesteryear...
A time when men and women were truly glamorous. A time when you could watch any movie with your children and not have to worry about gratuitous sex or violence – yet enjoy all the lustful inferences and edge-of-your-seat suspense.
Welcome to The Timeless Theater!
We're in the process of identifying which of our films are in the Public Domain, and offering these for sale on DVD.
​Please stay Tuned...!
Check out our new Film Noir Collection:
Coffee Mugs!
Phone Cases!
iPad Cases!
More coming soon!