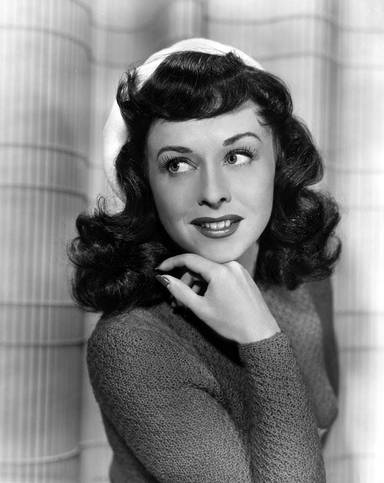 American actress Paulette Goddard, born Pauline Marion Levy, spent her teen years as a Broadway chorus girl, gaining attention when she was featured reclining on a prop crescent moon in the 1928 Ziegfeld musical Rio Rita. In Hollywood as early as 1929, Goddard reportedly appeared as an extra in several Hal Roach two-reel comedies, making confirmed bit appearances in a handful of these short subjects wearing a blonde wig over her naturally raven-black hair. Continuing as a blonde, she appeared as a "Goldwyn Girl" in the 1932 Eddie Cantor film Kid From Spain, where she was awarded several close-ups.

Goddard's career went into full gear when she met Charlie Chaplin, who was looking for an unknown actress to play "The Gamin" in his 1936 film Modern Times. Struck by the actress's breathtaking beauty and natural comic sense, Chaplin not only cast her in the film, but fell in love with her. It is still a matter of contention in some circles as to whether or not Chaplin and Goddard were ever legally married (Chaplin claimed they were; it was his third marriage and her second), but whatever the case, the two lived together throughout the 1930s. Goddard's expert performances in such films as The Young in Heart (1938) and The Cat and the Canary (1939) enabled her to ascend to stardom without Chaplin's sponsorship, but the role she truly craved was that of Scarlett O'Hara in the 1939 epic Gone With the Wind. Unfortunately, that did not work out, and Vivien Leigh landed the part.

After working together in The Great Dictator (1940), Goddard and Chaplin's relationship crumbled; by the mid-1940s she was married to another extremely gifted performer, Burgess Meredith. The actress remained a box-office draw for her home studio Paramount until 1949, when (presumably as a result of a recent flop titled Bride of Vengeance) she received a phone call at home telling her bluntly that her contract was dissolved. Goddard's film appearances in the 1950s were in such demeaning "B" pictures as Vice Squad (1953) and Babes in Baghdad (1953). Still quite beautiful, and possessed of a keener intellect than most movie actors, she retreated to Europe with her fourth (or third?) husband, German novelist Erich Maria Remarque (All Quiet on the Western Front). This union was successful, lasting until Remarque's death. Coaxed out of retirement for one made-for-TV movie in 1972 (The Snoop Sisters), Goddard preferred to remain in her lavish Switzerland home for the last two decades of her life.

Available Films:
Trivia:
Was the leading contender for the role of Scarlett O'Hara in Gone with the Wind (1939). Her inability to produce a marriage certificate to prove she and Charles Chaplin were married, and the appearance of Vivien Leigh on the scene, lost her the part.

She was one of the 20 original The Goldwyn Girls along with Lucille Ball, Virginia Bruce, Ann Dvorak and Betty Grable.

Claire Trevor once reminisced on her friendship with Goddard. She said that Goddard was a year older and that they had attended high school and sorority together, and that the guys were "gaga" over the lovely young Paulette.

According to "Paulette" by Joe Morella and Edward Z. Epstein, the actress had the inside track on marrying Clark Gable. When he was seeing her off to Mexico to film a movie, she asked him to kiss her goodbye, but Gable refused because of the many newsmen and photographers there. Goddard reportedly replied, "Well, that's that. So long, Sugar!" and with that the romance was over.

Because she would not do a dangerous stunt in Unconquered (1947), Cecil B. DeMille rejected her acceptance of a key role in The Greatest Show on Earth (1952) and cast Gloria Grahame, instead.

During the filming of The Women (1939), Rosalind Russell actually bit Paulette Goddard in their fight sequence. Despite the permanent scar the bite left Goddard, the actresses remained friends.

"Actors and actresses who say they never go to see their own pictures are talking through their hats. You don't have to be a [Sigmund Freud] to know that the most fascinating person in the world - actors or anybody - is yourself."

"I was quite poor to begin with. But I think a background of poverty is good. You can always go back to living on $20 a week. You feel like a bandit when you take the good things in life."

"I am not temperamental. I just know what I want and if I don't have it, I try to get it."

"I'm always slightly embarrassed to meet other actresses of my vintage. We have so little in common. They're all so dedicated. I find - so desperate."
Explore the simpler time of yesteryear...
A time when men and women were truly glamorous. A time when you could watch any movie with your children and not have to worry about gratuitous sex or violence – yet enjoy all the lustful inferences and edge-of-your-seat suspense.
Welcome to The Timeless Theater!
We're in the process of identifying which of our films are in the Public Domain, and offering these for sale on DVD.
​Please stay Tuned...!
Check out our new Film Noir Collection:
Coffee Mugs!
Phone Cases!
iPad Cases!
More coming soon!