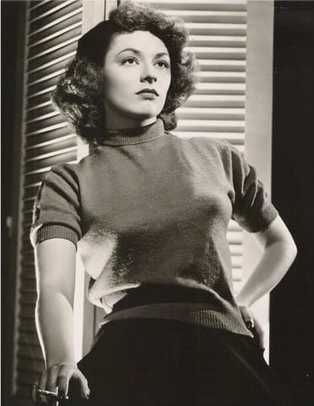 Tall, sultry, green-eyed blonde Peggie Castle was actually spotted by a talent scout while she was lunching in a Beverly Hills restaurant.

In her films she was usually somebody's "woman" rather than a girlfriend, and her career was confined to mostly "B"-grade action pictures, dramas or westerns: Harem Girl (1952), Wagons West (1952), The Prince Who Was a Thief (1951), Jesse James' Women (1954), among others. She did, however, have good roles in such films as Payment on Demand (1951) with Bette Davis, 99 River Street (1953) with John Payne, I, the Jury (1953), The White Orchid (1954), Miracle in the Rain (1956) with Jane Wyman and in Seven Hills of Rome (1957) with Mario Lanza. After three seasons playing sexy femme lead Lily Merrill, the dance-hall hostess and romantic interest for steely-eyed Marshal Dan Troop in the TV western series Lawman (1958), she left show business in 1962. She later developed an alcohol problem and died of cirrhosis of the liver in 1973 at age 45.
- IMDb Mini Biography By: banse@netzero.net

Trivia:
According to Hollywood lore, Peggie Castle was discovered by a talent agent while eating a shrimp cocktail in the seafood bar of the Farmer's Market in Los Angeles.

While promoted by Universal, she was dubbed "Miss Classy Chassis, "Miss Cheesecake" and "Miss Jet Job".

Developed a chronic alcohol problem in the early 1960s. In 1969 she attempted suicide by taking an overdose of barbiturates and slashing her wrists. She was later committed to California's Camarillo State Hospital for her alcoholism, but she regressed after her release.

"Let's face it. Nobody likes nice women on the screen. Nice women are dull."