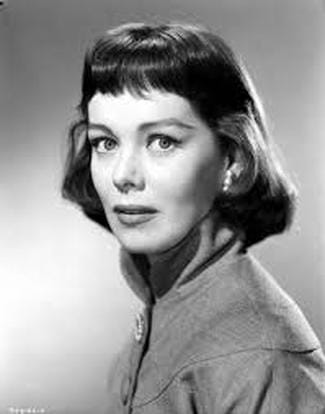 The wide eyes and cool smile of actress/model Phyllis Kirk graced many a magazine cover before she made her film debut in 1950. While her deep, sultry voice precluded most of the typical ingénue roles, Kirk nonetheless achieved film fame as a woman in peril, in André De Toth's 1953 3-D horror classic House of Wax.

Born Phyllis Kirkegaard in Plainfield, NJ, on September 18, 1926, Kirk shortened her name after moving to the Big Apple during her teens to formally train as a thespian. She officially launched her career with a series of supporting turns on Broadway, then migrated to Hollywood in the early '50s, where she landed parts in such films as Johnny Concho (1956, opposite Frank Sinatra) and The Sad Sack (1957, opposite Jerry Lewis). During the '50s, Kirk appeared on television semi-frequently as well, guest-starring in dozens of live and prerecorded anthology series, and briefly appearing as Red Buttons' wife on the comedian's weekly variety series, The Red Buttons Show.

From 1957 through 1959, Kirk starred as the inquisitive Nora Charles on the TV version of The Thin Man (Peter Lawford played her detective hubby Nick Charles). After 1960, Kirk concentrated on stage acting, but devoted the preponderance of her time to various social causes, such as establishing two inner-city preschools in south Los Angeles after the Watts riots. Kirk continued to crop up on television, however, as a celebrity contestant on such quiz shows as To Tell the Truth and Password. In 1965, she hosted an erudite ABC daytime talk show, The Young Set. A hip injury obliged Phyllis Kirk to curtail her acting career; she married a former CBS news executive and turned to the production end of the business, as a public-relations liaison for several TV specials of the 1970s.

Following two decades of big- and small-screen inactivity, 79-year-old Phyllis Kirk died of a post-cerebral aneurysm at the Motion Picture and Television Hospital in Woodland Hills, CA, on October 19, 2006.

Trivia:
Probably best remembered on series TV for playing stylish Nora Charles to Peter Lawford's sleuth Nick on The Thin Man (1957) for which she received an Emmy nomination. The series was loosely based on the classic series of films starring Myrna Loy and William Powell.

Known for being outspoken, Phyllis worked with the American Civil Liberties Union to campaign against capital punishment in the late 1950s. Before the California Assembly, she spoke against the death sentence of Caryl Chessman, nicknamed the "Red Light Bandit," who had been convicted on seventeen counts of kidnapping, robbery, rape and sexual assault. She visited him in prison several times before he was executed in 1960. The notoriety effectively led to the end of her acting career.

[on Bryan Foy, the producer of House of Wax (1953)] ". . . he was just a divine old curmudgeon. That's exactly what he was, with a hellish reputation for being impossible. I got called to his office before anyone had even told me that I was going to be in that film, and he looked at me long and hard and said, "Wellll, Miss Kirk, we're giving you this part because you're the only intelligent actress I know that I can stand."
Explore the simpler time of yesteryear...
A time when men and women were truly glamorous. A time when you could watch any movie with your children and not have to worry about gratuitous sex or violence – yet enjoy all the lustful inferences and edge-of-your-seat suspense.
Welcome to The Timeless Theater!
We're in the process of identifying which of our films are in the Public Domain, and offering these for sale on DVD.
​Please stay Tuned...!
Check out our new Film Noir Collection:
Coffee Mugs!
Phone Cases!
iPad Cases!
More coming soon!