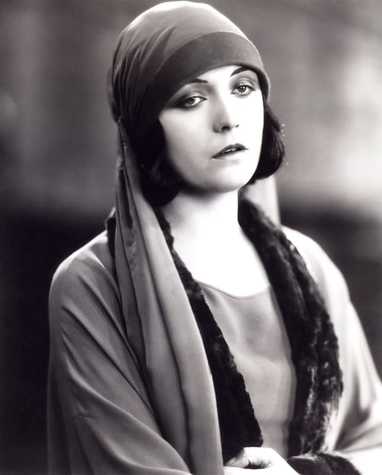 In 1913 she made her stage debut as an actress, and within a year she appeared in her first film. Soon she was a top screen star in Poland, prompting director Max Reinhardt to invite her to appear in his stage play Sumurun in Berlin; she remained there for five years, becoming internationally famous as the star of a number of major German films. Flooded with contract offers from Hollywood, she moved to America in 1923 and signed with Paramount for $3000 a week; she thus became Hollywood's first imported star.

Her exotic, mysterious, passionate qualities caught on with American audiences, and she made numerous popular films; eventually her salary went up to $10,000 a week. She attracted a great deal of publicity for her offscreen romances and her long-term feud with rival Gloria Swanson. She divorced her husband, a Polish count, and made headlines with an engagement to Charlie Chaplin; she broke with Chaplin and took up with Rudolph Valentino, enhancing her sex-siren image. Valentino's death in 1926 marked the beginning of her slip in popularity with the American public, which grew bored with her flamboyant exploits.

With the advent of the sound era, she returned to Europe. From 1927-31 she was married to a Russian prince; she divorced him because he mismanaged her investments during the stock market crash. She became popular again in Germany after starring in several films there; she was ordered barred from films because she was thought to be part Jewish, but Adolf Hitler personally overruled this decision due to his fondness for the mother-love film Mazurka (1935), which he reportedly watched once a week for its tearjerking effects on him. It was rumored that she and Hitler were romantically linked, but she successfully sued the French magazine that began the rumor.

She settled on the French Riviera, then returned to the U.S. in 1941 after the Germans invaded France. In 1951 she became a U.S. citizen. After 1941 she appeared in only two additional films. She lived out the rest of her long life in well-off seclusion. She authored an autobiography, Pola Negri: Memoirs of a Star.

Trivia:
She was engaged to Charles Chaplin before she became involved with Rudolph Valentino.

Around the time of her death, she was suffering from a brain tumor (unclear if malignant or otherwise) for which she refused treatment.

In her autobiography, she stated that Rudolph Valentino was the love of her life and said that they were engaged at the time of his death. Ben Lyon later claimed that she ordered a blanket of flowers to be placed across Rudy's coffin, reading "P-O-L-A" in large letters. However, photographs of Valentino's funeral show that flowers draped over his coffin had no such lettering and no contemporary newspaper accounts support this claim.

"Film Daily", Monday, July 3, 1939--Paris (by cable): Pola Negri appeared in court here on the weekend to ask 1,000,000-franc damages as the result of an article appearing in the "Paris Sun" newspaper which represented her as a friend of Adolf Hitler. She was described by two witnesses as having suffered much moral damage by the allegation. The actress remained silent throughout the proceedings, during which the paper's defense counsel tried to show that knowing Hitler was no slander.

"I consider my work great, as I am a great artist."

"Love is disgusting when you no longer possess yourself."
Explore the simpler time of yesteryear...
A time when men and women were truly glamorous. A time when you could watch any movie with your children and not have to worry about gratuitous sex or violence – yet enjoy all the lustful inferences and edge-of-your-seat suspense.
Welcome to The Timeless Theater!
We're in the process of identifying which of our films are in the Public Domain, and offering these for sale on DVD.
​Please stay Tuned...!
Check out our new Film Noir Collection:
Coffee Mugs!
Phone Cases!
iPad Cases!
More coming soon!