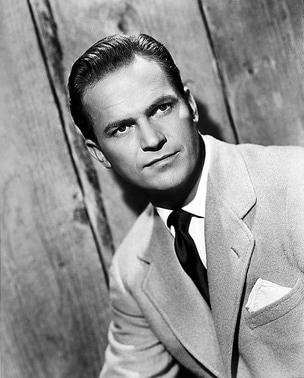 Northwestern University grad Ralph Meeker reached Broadway just when the "Method" school of acting was taking hold. His first role of note was Stanley Kowalski in Tennessee Williams' Streetcar Named Desire; Meeker took over the role from Marlon Brando, and there were those who felt that he was closer to Williams' concept of Stanley than the mighty Brando.

After playing Kowalski in the touring company of 'Streetcar', Meeker was further noticed for his part in the original production of "Mister Roberts" . As a result, he had several European motion picture offers and selected to play the role of an army sergeant in Teresa (1951), co-starring Pier Angeli.

Meeker went on to star in the Pulitzer Prize-winning William Inge play Picnic, though when time came to film the play, he was passed over in favor of the more bankable William Holden. As for his own film career, Meeker often had to settle for indifferent leading-man and villain assignments; his best screen showings included the role of Mike Hammer in 1955's Kiss Me Deadly and his harrowing portrayal of a condemned army private in Kubrick's Paths of Glory (1957).

In later years, Meeker claimed to have spurned Columbia's offer of reprising his role on screen because he disdained being shackled by a studio contract. In any case, the prize role went to William Holden and Meeker was consigned (with the odd exception) to playing hard- nosed guys on either side of the law - or bullies with a yellow streak - as a supporting actor over the next thirty years. He did, however, leave his mark with several top-notch performances.

He remained active onscreen until the early 1980s, and in 1978 both starred in and co-produced the feature film My Boys are Good Boys. In 1959, Ralph Meeker starred as army investigator Steve Dekker in the syndicated TV series Not For Hire.
Available Films:
Check out our new Film Noir themed gifts:
Coffee Mugs!