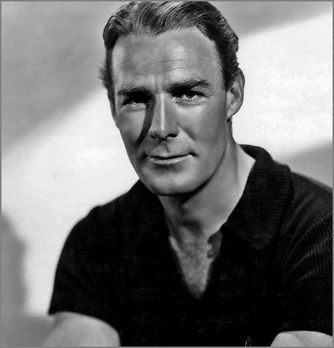 Handsome leading man who developed into one of Hollywood's greatest and most popular western stars. Born to George and Lucy Crane Scott during a visit to Virginia, Scott was raised in Charlotte, North Carolina in a wealthy family.

He attended Georgia Institute of Technology but, after being injured playing football, transferred to the University of North Carolina, from which he graduated with a degree in textile engineering and manufacturing. He discovered acting and went to California, where he met Howard Hughes, who obtained an audition for him for Cecil B. DeMille's Dynamite (1929), a role which went instead to Joel McCrea. He was hired to coach Gary Cooper in a Virginia dialect for The Virginian (1929) and played a bit part in the film.

Paramount scouts saw him in a play and offered him a contract. He met Cary Grant, another Paramount contract player, on the set of Hot Saturday (1932) and immediately moved in together. Their on-and-off living arrangement would last until 1942. Scott married and divorced wealthy heiress Marion DuPont in the late 1930's. He moved into leading roles at Paramount, although his easy-going charm was not enough to indicate the tremendous success that would come to him later. He was a pleasant figure in comedies, dramas and the occasional adventure, but it was not until he began focusing on westerns in the late 1940s that he reached his greatest stardom.

His screen persona altered into that of a stoic, craggy, and uncompromising figure, a tough, hard-bitten man seemingly unconnected to the light comedy lead he had been in the 1930s. He became one of the top box office stars of the 1950s and, in the westerns of Budd Boetticher especially, a critically important figure in the western as an art form. Following a critically acclaimed, less-heroic-than-usual role in one of the classics of the genre, Ride the High Country (1962), Scott retired from films.

A multimillionaire as a result of canny investments, Scott spent his remaining years playing golf and avoiding film industry affairs, stating that he didn't like publicity. He died in 1987 survived by his second wife, Patricia Stillman, and his two adopted children, Christopher and Sandra. He is buried in Charlotte, North Carolina.

Available Films:
Trivia:
From 1932-44 he was roommates with Cary Grant in a beach house known jocularly as Bachelor Hall. The close friendship between Scott and Grant and the steady stream of women into and out of Bachelor Hall have fed rumor mills for years. It was said that Grant and Scott were lovers, and the women were arranged by the film studios for public effect.

Rode a beautiful blond sorrel horse named Stardust in many of his westerns.

Remained close friends with Cary Grant until the day he died. When he heard of his old friend's death, he reportedly put his head in his hands and wept. He himself would die a little over 2 months afterwards.

Retired from acting at the age of 64 because he knew he could never hope to surpass his performance in the Sam Peckinpah western Ride the High Country (1962).

At the time of his retirement from acting he had been seriously considered for the role played by Chuck Connors in the Doris Day comedy Move Over, Darling (1963). It was to have been a reprise of the role he played in My Favorite Wife (1940).

Playing golf with Howard Hughes got him his first movie job as an extra on a silent film with George O'Brien and Lois Moran.

He was hired by Victor Fleming to coach Gary Cooper on speaking with a Virginia accent for The Virginian (1929).

Lupe Velez claimed in 1932 that she was going to marry Scott but changed her mind. Scott denied this, saying he only saw her once at the Brown Derby.

He was scheduled to co-star once again with friend Cary Grant in Spawn of the North (1938), but salacious rumors about the two caused Paramount to replace them with Henry Fonda and George Raft. Shortly after completing his Paramount contract Scott opted not to resign and instead moved to Fox.

His face is the model for the Oakland Raiders logo.

"I had always been a fatalist about my career. What was to be was to be. At least it worked out that way in my case. My retirement is both voluntary and involuntary. One reason, and this is voluntary, is the impact of television. All old movies are turning up on television, and frankly making pictures doesn't interest me anymore. Another reason is that the film industry is in a declining state."

[on his mother] "She was an old-fashioned Southern lady who always contended movies were not here to stay, My five sisters took her to see me in a film and the first time she saw me on the screen, she said, "Oh, no! That can't be Randolph. This feller's older than Randy and not so good-looking".

[on his short marriage to heiress Marianna du Pont Somerville] "Our separation is entirely friendly. It's merely a case of being separated too much, which did not prove compatible with marriage."

[on his father] "He went to see all my films--not because he had a son starring in them, but because he thought I looked like Wallace Reid, his favorite actor."
Explore the simpler time of yesteryear...
A time when men and women were truly glamorous. A time when you could watch any movie with your children and not have to worry about gratuitous sex or violence – yet enjoy all the lustful inferences and edge-of-your-seat suspense.
Welcome to The Timeless Theater!
We're in the process of identifying which of our films are in the Public Domain, and offering these for sale on DVD.
​Please stay Tuned...!
Check out our new Film Noir Collection:
Coffee Mugs!
Phone Cases!
iPad Cases!
More coming soon!