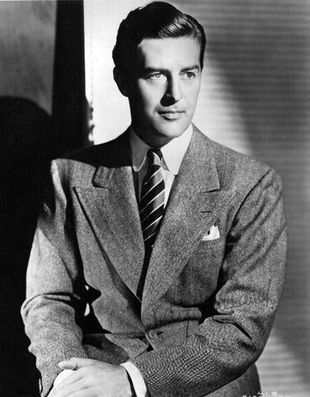 Ray Milland became one of Paramount's most bankable and durable stars, under contract from 1934 to 1948, yet little in his early life suggested a career as a motion picture actor.

Milland was born Alfred Reginald Jones in the Welsh town of Neath, Glamorgan, to Elizabeth Annie (Truscott) and Alfred Jones. He spent his youth in the pursuit of sports. He became an expert rider early on, working at his uncle's horse-breeding estate while studying at the King's College in Cardiff. At 21, he went to London as a member of the elite Household Cavalry (Guard for the Royal Family), undergoing a rigorous 19-months training, further honing his equestrian skills, as well as becoming adept at fencing, boxing and shooting. He won trophies, including the Bisley Match, with his unit's crack rifle team. However, after four years, he suddenly lost his means of financial support (independent income being a requirement as a Guardsman) when his stepfather discontinued his allowance. Broke, he tried his hand at acting in small parts on the London stage.

There are several stories as to how he derived his stage name. It is known, that during his teens he called himself "Mullane", using his stepfather's surname. He may later have suffused "Mullane" with "mill-lands", an area near his hometown. When he first appeared on screen in British films, he was billed first as Spike Milland, then Raymond Milland.

In 1929, Ray befriended the popular actress Estelle Brody at a party and, later that year, visited her on the set of her latest film, The Plaything (1929). While having lunch, they were joined by a producer who persuaded the handsome Welshman to appear in a motion picture bit part. Ray rose to the challenge and bigger roles followed, including the male lead in The Lady from the Sea (1929). The following year, he was signed by MGM and went to Hollywood, but was given little to work with, except for the role of Charles Laughton's ill-fated nephew in Payment Deferred (1932). After a year, Ray was out of his contract and returned to England.

His big break did not come until 1934 when he joined Paramount, where he was to remain for the better part of his Hollywood career. During the first few years, he served an apprenticeship playing second leads, usually as the debonair man-about-town, in light romantic comedies. He appeared with Burns and Allen in Many Happy Returns (1934), enjoyed third-billing as a British aristocrat in the Claudette Colbert farce The Gilded Lily (1935) and was described as "excellent" by reviewers for his role in the sentimental drama Alias Mary Dow (1935). By 1936, he had graduated to starring roles, first as the injured British hunter rescued on a tropical island by The Jungle Princess (1936), the film which launched Dorothy Lamour's sarong-clad career. After that, he was the titular hero of Bulldog Drummond Escapes (1937) and, finally, won the girl (rather than being the "other man") in Mitchell Leisen's screwball comedy Easy Living (1937). He also re-visited the tropics in Ebb Tide (1937), Her Jungle Love (1938) and Tropic Holiday (1938), as well as being one of the three valiant brothers of Beau Geste (1939).

In 1940, Ray was sent back to England to star in the screen adaptation of Terence Rattigan's French Without Tears (1940), for which he received his best critical reviews to date. He was top-billed (above John Wayne) running a ship salvage operation in Cecil B. DeMille's lavish Technicolor adventure drama Reap the Wild Wind (1942), besting Wayne in a fight - much to the "Duke's" personal chagrin - and later wrestling with a giant octopus. Also that year, he was directed by Billy Wilder in a charming comedy, The Major and the Minor (1942) (co-starred with Ginger Rogers), for which he garnered good notices from Bosley Crowther of the New York Times. Ray then played a ghost hunter in The Uninvited (1944), and the suave hero caught in a web of espionage in Fritz Lang's thriller Ministry of Fear (1944).

On the strength of his previous role as "Major Kirby", Billy Wilder chose to cast Ray against type in the ground-breaking drama The Lost Weekend (1945) as dipsomaniac writer "Don Birnam". Ray gave the defining performance of his career, his intensity catching critics, used to him as a lightweight leading man, by surprise. Crowther commented "Mr. Milland, in a splendid performance, catches all the ugly nature of a 'drunk', yet reveals the inner torment and degradation of a respectable man who knows his weakness and his shame" (New York Times, December 3, 1945). Arrived at the high point of his career, Ray Milland won the Oscar for Best Actor, as well as the New York Critic's Award. Rarely given such good material again, he nonetheless featured memorably in many more splendid films, often exploiting the newly discovered "darker side" of his personality: as the reporter framed for murder by Charles Laughton's heinous publishing magnate in The Big Clock (1948); as the sophisticated, manipulating art thief "Mark Bellis" in the Victorian melodrama So Evil My Love (1948) (for which producer Hal B. Wallis sent him back to England); as a Fedora-wearing, Armani-suited "Lucifer", trawling for the soul of an honest District Attorney in Alias Nick Beal (1949); and as a traitorous scientist in The Thief (1952), giving what critics described as a "sensitive" and "towering" performance. In 1954, Ray played calculating ex-tennis champ "Tony Wendice", who blackmails a former Cambridge chump into murdering his wife, in Alfred Hitchcock's Dial M for Murder (1954). He played the part with urbane sophistication and cold detachment throughout, even in the scene of denouement, calmly offering a drink to the arresting officers.

With Lisbon (1956), Ray Milland moved into another direction, turning out several off-beat, low-budget films with himself as the lead, notably The Safecracker (1958) and Panic in Year Zero! (1962). At the same time, he cheerfully made the transition to character parts, often in horror and sci-fi outings. In accordance with his own dictum of appearing in anything that had "any originality", he worked on two notable pictures with Roger Corman: first, as a man obsessed with catalepsy in Premature Burial (1962); secondly, as obsessed self-destructive surgeon "Dr. Xavier" in X: The Man with the X-Ray Eyes (1963)-the Man with X-Ray Eyes, a film which, despite its low budget, won the 1963 Golden Asteroid in the Trieste Festival for Science Fiction.

As the years went on, Ray gradually disposed of his long-standing toupee, lending dignity through his presence to many run-of-the-mill television films, such as Cave In! (1983) and maudlin melodramas like Love Story (1970). He guest-starred in many anthology series on television and had notable roles in Rod Serling's Night Gallery (1969) and the original Battlestar Galactica (1978) (as Quorum member Sire Uri). He also enjoyed a brief run on Broadway, starring as "Simon Crawford" in "Hostile Witness" (1966), at the Music Box Theatre.

In his private life, Ray was an enthusiastic yachtsman, who loved fishing and collecting information by reading the Encyclopedia Brittanica. In later years, he became very popular with interviewers because of his candid spontaneity and humour. In the same self-deprecating vein he wrote an anecdotal biography, "Wide-Eyed in Babylon", in 1976. A film star, as well as an outstanding actor, Ray Milland died of cancer at the age of 81 in March 1986.

Available Films:
Trivia:
When working on I Wanted Wings (1941), with Brian Donlevy and William Holden, he went up with a pilot to test a plane for filming. While up in the air, Ray decided to do a parachute jump (being an avid amateur parachutist) but, just before he could disembark, the plane began to sputter and the pilot said not to jump as they were running low on gas and he needed to land. Well, once on the ground and in the hangar, Ray began to tell his story of how he had wanted to do a jump. As he told the story, the color ran out of the costume man's face. When asked why, he told Ray that the parachute he had worn up in the plane was "just a prop". There had been no parachute.

Had a near-fatal accident on the set of Hotel Imperial (1939). One scene called for him to lead a cavalry charge through a small village. An accomplished horseman, Milland insisted upon doing this scene himself. As he was making a scripted jump on the horse, his saddle came loose, sending him flying straight into a pile of broken masonary. Laid up in the hospital for weeks with multiple fractures and lacerations, he was lucky to be alive.

Only got the lead role in The Lost Weekend (1945)) because Paramount vetoed writer-director Billy Wilder's first choice for the role, Broadway actor José Ferrer. Hedging its bets, Paramount demanded the casting of a star to headline the risky production, but Cary Grant and most of the other leading male stars of the day turned Wilder down. Milland got the role by default and won an Oscar.

[on Hedda Hopper] "She was venomous, vicious, a pathological liar, and quite stupid."

[when asked why he had appeared in so many bad films late in his career] "For the money, old chap, for the money!"

[After doing Arise, My Love (1940)] "I called up my wife long distance and said, "Mal honey, when this picture comes out I'm finished. Sell everything we've got and we'll try to start a new life somewhere else." Then it came out and was an enormous hit which really boosted my career - that shows you how much I knew in those days."

"My philosophy is do what you can with what you've got. I know actors from my generation who cry "Why don't they send me any scripts?". I tell them, "Because you still think of yourself as a leading man. You're 68, not 38. Face it.".
Explore the simpler time of yesteryear...
A time when men and women were truly glamorous. A time when you could watch any movie with your children and not have to worry about gratuitous sex or violence – yet enjoy all the lustful inferences and edge-of-your-seat suspense.
Welcome to The Timeless Theater!
We're in the process of identifying which of our films are in the Public Domain, and offering these for sale on DVD.
​Please stay Tuned...!
Check out our new Film Noir Collection:
Coffee Mugs!
Phone Cases!
iPad Cases!
More coming soon!